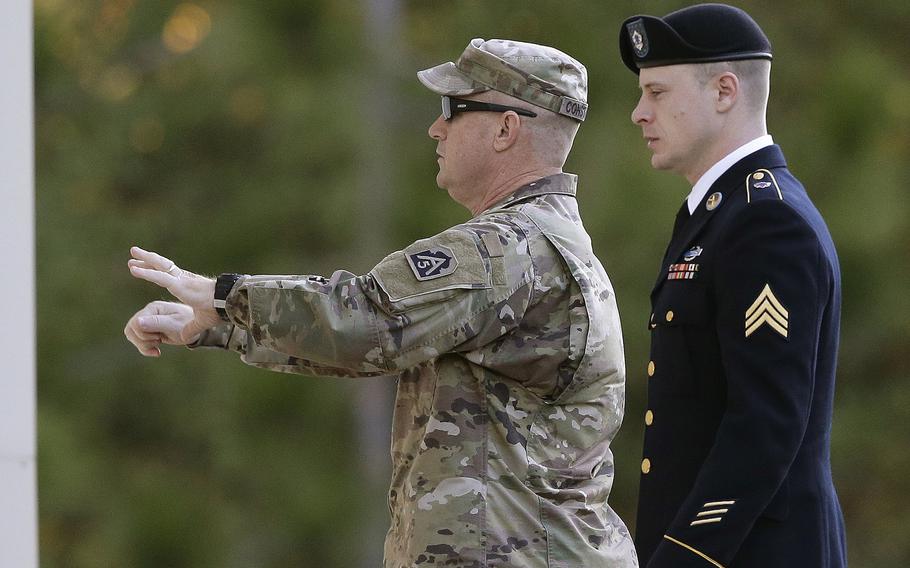 Army Sgt. Bowe Bergdahl leaves the Fort Bragg courtroom facility, on Friday, Nov. 3, 2017. The judge ruled that Bergdahl to get dishonorable discharge, lose rank, forfeit pay in addition to getting no prison time. Bergdahl, walked off his base in Afghanistan in 2009 and was held by the Taliban for five years, pleaded guilty to desertion and misbehavior before the enemy. (Gerry Broome/AP) 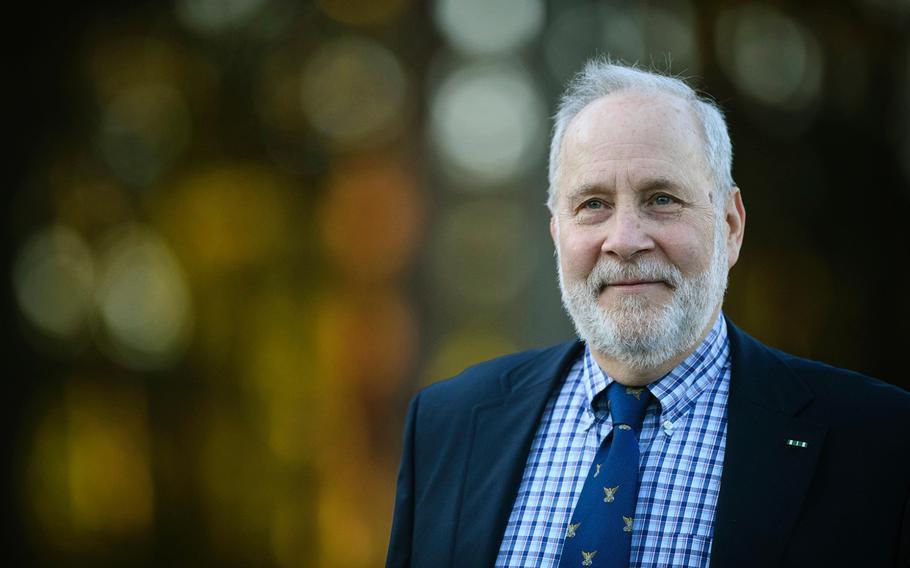 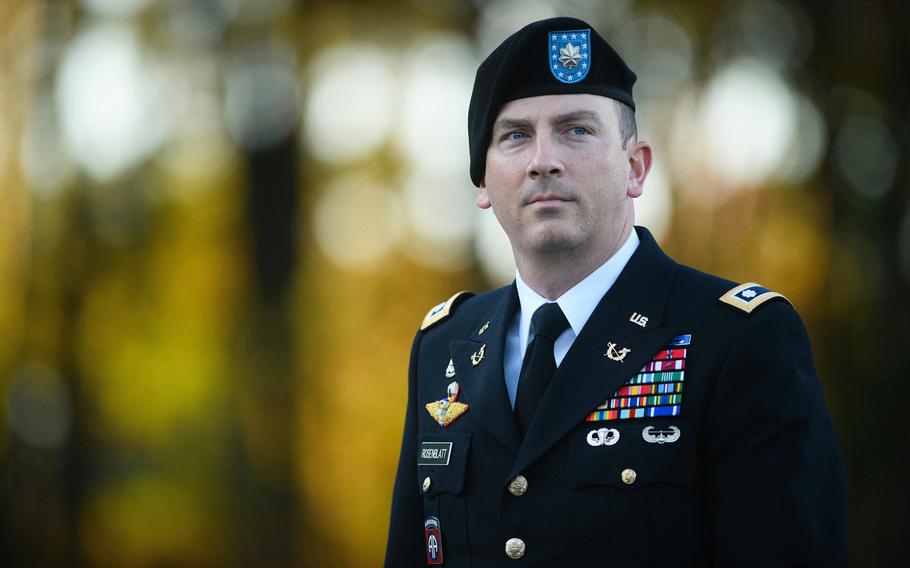 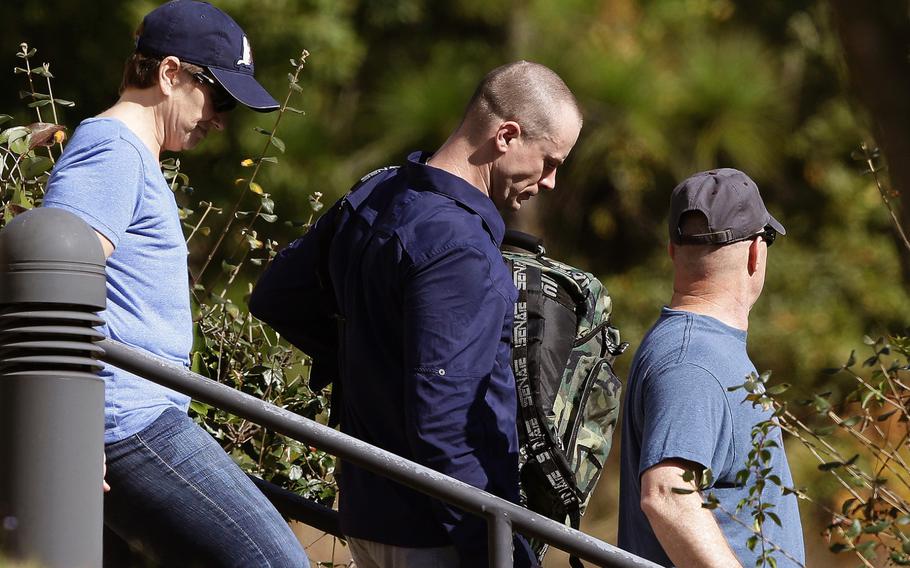 Bowe Bergdahl, demoted from sergeant to private and given a dishonorable discharge, is driven away from the Fort Bragg, N.C., court facility on Friday, Nov. 3, 2017. Bergdahl, who walked off his base in Afghanistan in 2009 and was held by the Taliban for five years, was spared a prison sentence. (Andrew Craft /The Fayetteville Observer/AP)

The judge, Army Col. Jeffery R. Nance, sentenced Bergdahl to forfeit $10,000 in pay, a reduction in rank to E-1 private and a dishonorable discharge, barring him from receiving any medical or other benefits entitled to most veterans. The soldier will forfeit $1,000 in pay monthly for 10 months.

On Friday, Bergdahl, wearing his blue Army service uniform, wept, his body trembling as two of his defense attorneys comforted him while Nance read his sentence in the Fort Bragg courtroom.

The judge did not elaborate on his reasoning for the lenient punishment. In 2013 Nance presided over the trial of Sgt. Robert Bales, who was sentenced to life without parole for massacring 16 men, women and children in a shooting spree in southern Afghanistan.

“We’re extremely pleased that Sgt. Bergdahl is not being sentenced to confinement,” Bergdahl’s lead attorney Eugene Fidell said outside the courtroom after the sentencing. “That would have been a scandalous outcome.”

Army prosecutors on Thursday recommended Bergdahl, who was held captive by the Taliban for five years after walking off his post in June 2009, serve 14 years in a military prison for deserting and endangering hundreds of troops who, in many cases, spent weeks searching for his location. Some servicemembers suffered severe injuries searching for Bergdahl after he disappeared.

However, defense attorneys recommended Bergdahl receive no jail time, suggesting the judge hand him a dishonorable discharge. They argued the soldier faced enough punishment at the hands of Taliban-linked Haqqani militants in Pakistan during his captivity. Defense attorneys also cited Bergdahl’s cooperation providing information about the Haqqani’s captor network and his documented mental health conditions that include post-traumatic stress disorder.

Bergdahl, 31, pleaded guilty Oct. 16 to desertion and misbehavior before the enemy charges, admitting leaving his post endangered his fellow troops. He faced a maximum punishment up to life imprisonment, reduction in rank to private, forfeiture of all pay and a dishonorable discharge.

The punitive discharge triggers an automatic appellate court review for Bergdahl’s case. He will not be discharged from duty until the U.S. Army Court of Criminal Appeals completes its review, which is not expected to begin for several months. Fidell said Bergdahl would likely remain in the Army on leave until that time.

The attorney vowed Friday that he would seek to have Bergdahl’s conviction thrown out, citing “reprehensible” interference in the case by President Donald Trump, who made the soldier a repeated theme in his presidential campaign, drawing cheers from rally crowds as he denounced Bergdahl as a “dirty, rotten traitor” who “should be shot” or returned to the Taliban.

“President Trump’s unprincipled effort to stoke a lynch-mob atmosphere while seeking our nation’s highest office has cast a dark cloud over the case,” Fidell said. “Every American should be offended by his assault on the fair administration of justice and disdain for constitutional rights.”

“The decision on Sgt. Bergdahl is a complete and total disgrace to our country and to our military,” Trump tweeted.

Fidell charged Trump’s scorn toward Bergdahl was directed at former President Barack Obama, whose administration in May 2014 orchestrated the exchange of five Taliban commanders held at the detention facility at Guantanamo Bay in Cuba for Bergdahl’s release.

The controversial deal and Obama’s Rose Garden announcement of Bergdahl’s return drew the immediate ire of congressional Republicans, launching a political debate around the soldier who the military already knew had walked away from his base without permission.

From the witness stand Tuesday, Bergdahl called his desertion a “horrible mistake,” delivering an at-times tearful apology to his platoon-mates and others sent searching for him.

Bergdahl said he left his post in an attempt to walk to a forward operating base some 20 miles away to alert military brass of problems he perceived within his unit.

“I was trying to help and knowing I did not breaks my heart,” he said.

In 2015, Lt. Gen. Kenneth Dahl, who conducted the Army’s investigation into Bergdahl’s disappearance, testified he found the soldier “unrealistically idealistic” and recommended he face no jail time.

Bergdahl washed out of Coast Guard basic training in 2006, two years before he enlisted in the Army, after suffering a stress-induced anxiety attack. An Army doctor later diagnosed Bergdahl with schizotypal personality disorder, a schizophrenia-like condition characterized by occasionally psychotic episodes and difficult connecting with other humans.

Nonetheless, the doctors concluded Bergdahl “was able to appreciate the nature and quality and wrongfulness of his conduct,” when he deserted.

Bergdahl detailed the physical and mental abuses he suffered for five years at the hands of the Haqqanis, including beatings with copper wires, burns to his feet and regular subjection to beheading videos.

He described the near-constant dysentery that he experienced and his struggle to keep from defecating at certain times, knowing his captors would beat him if forced to clean up.

After he managed once to escape for some eight days about a year into his captivity, the Haqqanis locked him in a small cage for the final four years that they held him, leaving him isolated except to occasionally force him to watch graphic Taliban propaganda videos, Bergdahl said.

“I have suffered because of my bad choices,” he said.

Prosecutors argued others suffered too because of Bergdahl’s choice.

The wife of a third servicemember severely wounded looking for Bergdahl, retired Master Sgt. Mark Allen, testified that her husband was left paralyzed, unable to communicate and in constant pain since he was shot through the head. Shannon Allen told Nance this week that her husband has had at least a dozen surgeries, including the removal of portions of his brain since he was shot about a week after Bergahl disappeared.

Her husband’s condition, she said, has made her more caretaker than wife.

“We can’t even hold hands anymore unless I pry open his hand and place mine in there,” she said Monday from the witness stand, fighting back tears. “It doesn’t mean I love him any less.”

Fidell said Thursday that Bergdahl was thankful for all the servicemembers who risked their lives to attempt to find him before the Taliban could smuggle him into Pakistan.

“Sgt. Bergdahl is grateful to everyone who searched for him in 2009, especially those who heroically sustained injuries,” he said.

The attorney did not indicate what Bergdahl’s next step would be.

The soldier has been offered a job as a caretaker at an animal shelter in San Antonio, Texas, an unnamed woman testified Wednesday. Bergdahl had been stationed at Joint Base San Antonio since his release.

The woman said Bergdahl has shown a special connection to animals, especially feral cats, while working at the shelter. She said he would be welcomed to work their regardless of the outcome of his court-martial.

“Animals that are usually scared and avoid people were coming up and surrounding him,” the woman said, calling him “the cat whisperer.”