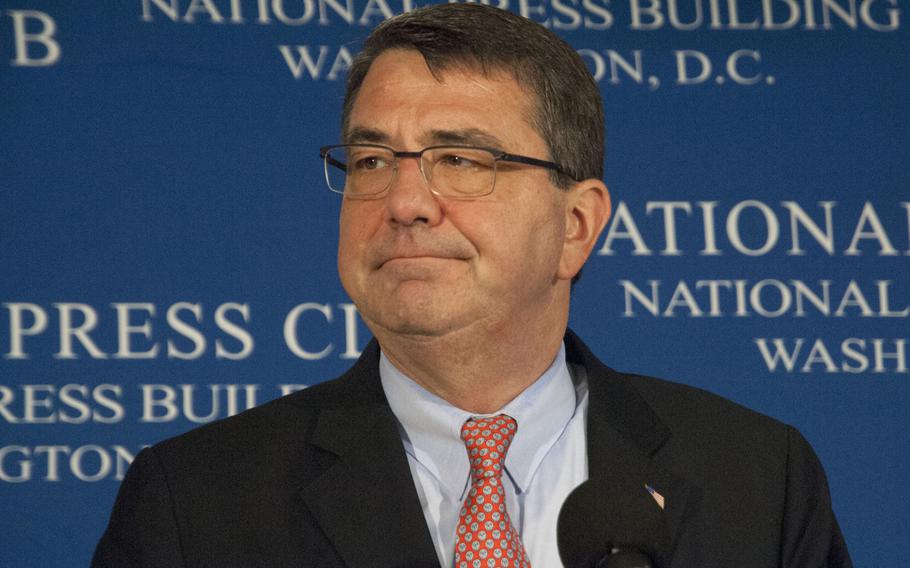 Buy Photo
Deputy Secretary of Defense Dr. Ashton B. Carter talks about the Defense Department's budgetary challenges at the National Press Club in Washington, D.C., May 7, 2013. (Joe Gromelski/Stars and Stripes)

WASHINGTON — In a surprise announcement Thursday, the Pentagon said the Defense Department’s No. 2 official, Deputy Secretary of Defense Ashton B. Carter, will retire on Dec. 4.

As right-hand man to Defense Secretary Chuck Hagel, Carter, 59, is responsible for overseeing the department’s day-to-day operations and has played a prominent role as the military struggled through a gantlet defense cuts, sequestration and a government shutdown now that was in its tenth day on Thursday.

Carter, about whom there have been Washington whispers hinting of tension with Hagel in recent months, is stepping down of his own accord and received a standing ovation for his service from Hagel and the secretary's leadership team Thursday, Pentagon press secretary George Little said.

"The decision to depart the Pentagon later this year was Deputy Secretary Carter's and his alone," Little said. "He'll be missed by the Secretary."

Carter took over the job in October 2011 under former Defense Secretary Leon Panetta, and was considered one of the top contenders for the job after Panetta announced his retirement. President Barack Obama instead nominated Hagel, and Carter remained as deputy secretary after Hagel was confirmed in February.

In a written statement, Hagel said he had reluctantly accepted Carter’s decision to step down earlier Thursday.

“Ash has been an extraordinarily loyal and effective Deputy Secretary, both for me and Secretary Panetta,” Hagel said. “In his previous capacity as Undersecretary of Defense for Acquisition, Technology and Logistics, he provided outstanding support to Secretary Gates and — most importantly — to our men and women fighting downrange.

“He possesses an unparalleled knowledge of every facet of America’s defense enterprise, having worked directly and indirectly for eleven Secretaries of Defense over the course of his storied career.”

For his part, Carter said he had long been planning to retire this December, but delayed the announcement because of the turbulence of the Defense Department’s fiscal situation.

“But I have decided that this situation might well continue and I don’t want any more time to pass before giving you the opportunity to begin a smooth transition within the office of the Deputy Secretary,” he wrote in a letter to Hagel dated Thursday.

Carter, who holds a doctorate in theoretical physics from Oxford University and is widely regarded as possessing a powerful intellect, has been deeply involved on both the technical and policy sides of the U.S. military for decades. He served as a member of the Defense Science Board throughout most of the 1990s, and served as well in various policy positions throughout several presidential administrations. In 2009 he became the Pentagon’s chief weapons buyer as Undersecretary of Defense for Acquisition, Technology and Logistics.

In the letter to Hagel, Carter said he was deeply committed to the DOD’s mission and people.

“I have dedicated myself to providing agile support for the war fighter in Iraq, Afghanistan, and wherever they are deployed; to achieving better buying power for the taxpayer in the defense budget; and to providing sound management for the Secretary and the Department,” he wrote. “Above all, Stephanie’s heart and my own have been, and will forever be, ‘all-in’ for our troops and their families, whom we regard with enormous respect and loving care.”

Carter did not hint at his post-DOD plans, but Hagel said he expected his soon-to-be former deputy to continue making important contributions to the nation.

“I am confident that the Department, and the country, will continue to benefit from Ash Carter’s service in the months and years ahead,” he said. “I am thankful that Ash will continue to be at my side for the next two months, helping the Department of Defense manage through a very disruptive and difficult time, and ensuring a smooth transition within the office of the Deputy Secretary.”