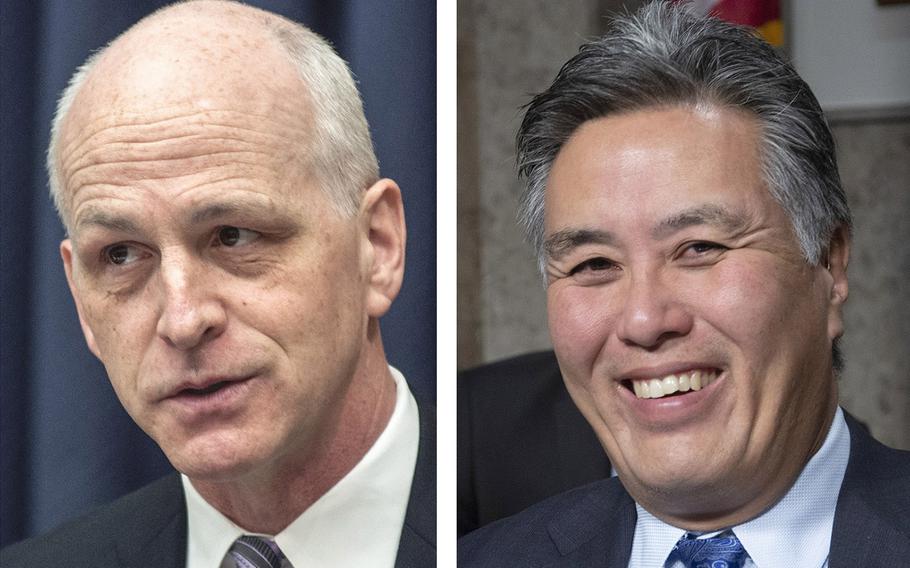 WASHINGTON – The fate of an ongoing military buildup, war oversight, veterans affairs and decisions on who can enlist in the service now rests with a split Congress following the results of Tuesday’s midterm elections.

By early Wednesday, Democrats won control of the House, shifting leadership of key committees that direct military and veteran issues. However, Republicans retained control of the Senate.

One supporter of the Democratic shift suggested lawmakers could finally install new levels of oversight on President Donald Trump’s growing list of demands for the military.

“You are going to see us put the reins on Donald Trump,” said Jon Soltz, chairman of progressive political organization VoteVets, which supported a slate of Democratic military veterans running for office. “You will see more priorities that Democrats will focus on,” such as addressing an end game to the overseas wars, revamping the president’s war powers, boosting oversight of operations in Yemen and elsewhere and protecting veterans better.

By Wednesday afternoon, The Associated Press said Democrats looked to control the House by 220 to 193 seats, with nearly two dozen races yet to be decided.

“From tonight’s results, it is clear that Americans are hungry for a change in leadership and a new tone in politics,” said Emily Cherniack, founder and executive director of bipartisan political group New Politics.

All 435 seats in the House and 35 of the Senate’s 100 seats were up for grabs. With Republicans under threat, both parties ramped up their campaign efforts.

In the heat of the struggle, some Democratic lawmakers laid out a strategy for military issues should they gain control.

Rep. Adam Smith of Washington state, the ranking Democrat for the House Armed Services Committee who won re-election Tuesday, is poised to take the helm of the committee. Smith had said ahead of Tuesday’s elections that defense spending, increased oversight and thwarting limits on who can serve in the military would be top priorities.

“I think the biggest difference will probably be more oversight,” Smith had said. “We’re not clear exactly where this administration is going with the military.”

Control shifts for key committeesWith Democrats capturing control of the House, they take over leadership of the key House committees of Armed Services, Veterans Affairs and Appropriations. The Armed Services Committee helps shape policy and spending at the Pentagon, while the Veterans Affairs committee handles issues facing former servicemembers and the Appropriations Committee directs funding to the Pentagon.

“It’s important to remember that the while the people who tend to serve on the Veterans Affairs committees and those that become chairs tend to be military veterans. It’s not like the parties have very different views on veterans policies,” such as education and other veteran benefits, said Teigen, author of the book “Why Veterans Run: Military Service in American Presidential Elections, 1789-2016.” “This is one area of politics where the parties have very warm accord.”

However, while there might be more disagreements when it comes to the Armed Services committees in both chambers, there’s still a great deal of agreement, Teigen said.

“It will certainly be less bipartisan than the warm accord in the veterans affairs committees but nowhere near as contentious as you will find in other parts” of Capitol Hill, he said.

With Smith slated to be chairman of the House Armed Services Committee, he could be swapping spots with the current Republican chairman of the panel. Texas Rep. Mac Thornberry, who was re-elected Tuesday, could move into a new role as the panel’s ranking Republican next year.

At least a dozen lawmakers are slated to leave their roles on the House Armed Services committee, including several retiring members and some who lost their bids for re-election such as Oklahoma Republican Rep. Steve Russell. But several key members of the House and Senate armed services panels won re-election, including Reps. Mike Gallagher, R-Wisc., and Ruben Gallego, D-Ariz., and Sens. Tim Kaine, D-Va., and Kirsten Gillibrand, D-N.Y

In the upper chamber, Sen. Jim Inhofe, R-Okla., is expected to remain in his role as chairman of the Senate Armed Services Committee. Inhofe took the seat after the death of Arizona Republican Sen. John McCain in August.

Sen. Jack Reed, D-R.I., the ranking Democrat on the Senate Armed Services Committee, said ahead of the elections that there would still be plenty of continuity on defense matters even if Democrats took control. Reed, who is in a current term that ends in 2020, pointed to support for the National Defense Authorization Act, or NDAA, the legislation that dictates Pentagon policies and spending.

Instead, Reed said the biggest challenge would likely be the so-called sequestration – automatic, across-the-board budget cuts. Those spending restrictions would be triggered if Congress can’t reach a deal next year to lift them.

“The last year, the votes in both chambers were overwhelming bipartisan,” Reed had said. “So, I don’t think they shift dramatically because the same leadership that was behind the support of the issues – the NDAA – would be in the leadership in the House and the Senate next year.”

There’s also Democratic opposition to a Trump-driven plan to create a costly branch of the military called Space Force to address defense for space-based endeavors. The move would cost about $13 billion for 10 years, Reed said.

“Space Force, to me, would be not the most effective way to deal with these issues,” Reed said earlier this year. “Perhaps the model is not a Space Force, but something along the lines of Cyber Command, where you don’t have a special service, but what you have is a unified effort by all the services.”

Takano poised to lead VA committeeWith control of the House switching to Democrats, Rep. Mark Takano, D-Calif., is looking to become the next chairman of the House Committee on Veterans’ Affairs. Takano won re-election Tuesday against his Republican challenger, Aja Smith.

Takano has already laid out his priorities for the committee if he were to take over as chairman. They include stopping the deportation of veterans and establishing more effective citizenship procedures for immigrant servicemembers. He wants to fill the tens of thousands of vacancies across the Department of Veterans Affairs and stop for-profit colleges from targeting and cheating veterans.

For the past two years, with a Congress and White House led by Republicans, the House and Senate veterans affairs committees have pushed through major bipartisan reforms, from expanding veterans’ education benefits to overhauling the VA’s private-sector health care programs and giving VA leaders more authority to fire their employees.

With the chambers now split, they’re likely to experience gridlock.

In a speech to the American Legion in August, Takano vowed to work with Republicans and VA Secretary Robert Wilkie. However, one of his top priorities – veteran deportation and citizenship for immigrant servicemembers – is a topic that Republicans in Congress have been unwilling to address.

Rep. Phil Roe, R-Tenn., the chairman of the House Committee of Veterans’ Affairs, will keep his seat after defeating his Democratic challenger by a wide margin. Nine other Republicans on the committee won Tuesday. One Republican member – Rep. Bruce Poliquin – remained in a tight race early Wednesday morning against his opponent, Iraq War veteran Jared Golden.

One longtime congressman, Rep. Mike Coffman, R-Colo., lost to first-time political candidate and Iraq War veteran Jason Crow. Coffman, who was seeking a sixth term in the House, is a member of the House Armed Services and VA committees.

Three Democrats on the House Committee on Veterans’ Affairs didn’t seek re-election. Rep. Tim Walz won the Minnesota gubernatorial race Tuesday, Rep. Beto O’Rourke, also a member of the Armed Services Committee, lost his race to unseat Sen. Ted Cruz, R-Texas, and Rep. Elizabeth Esty is leaving Congress following a harassment scandal including her chief of staff. All other Democrats on the committee will keep their seats.

Jon Tester, a senator since 2007, appeared to win a tight race Wednesday against Republican Matt Rosendale in a hard-fought race in Montana. An upset would leave a hole on the Senate Veterans’ Affairs Committee, on which Tester serves as the ranking Democrat. Working with Republicans and Democrats the past two years, Tester was a top decision-maker on veterans issues and helped shepherd several major, bipartisan VA reforms through Congress.

The Montana race was one of the most closely watched in this election, with Trump traveling to the state four times since July. He repeatedly went after Tester – at rallies and via Twitter – for his role in toppling Rear Adm. Ronny Jackson’s nomination to be secretary of the Department of Veterans Affairs. Trump accused Tester of leading a “Democrat mob” to “destroy” Jackson. However, Trump acknowledged during one rally in October that Jackson may not have been qualified for the job.

On Wednesday, Trump congratulated Tester during a raucous press conference.

New Congress, new challengesLawmakers will need to address spending caps slated to return for the 2020 fiscal year under the Budget Control Act, or BCA, which could cut the budget to $576 billion.

That would be a dramatic slash from an initial Pentagon budget that said spending would need to be $733 billion in the new fiscal year that starts Oct. 1, 2019.

Democrats could thwart Trump-led plans for a spending spree for “low-yield” nukes, the creation of a new, the Space Force effort, boost oversight in military operations domestic and abroad, and push for legislation revamping the president’s war powers.