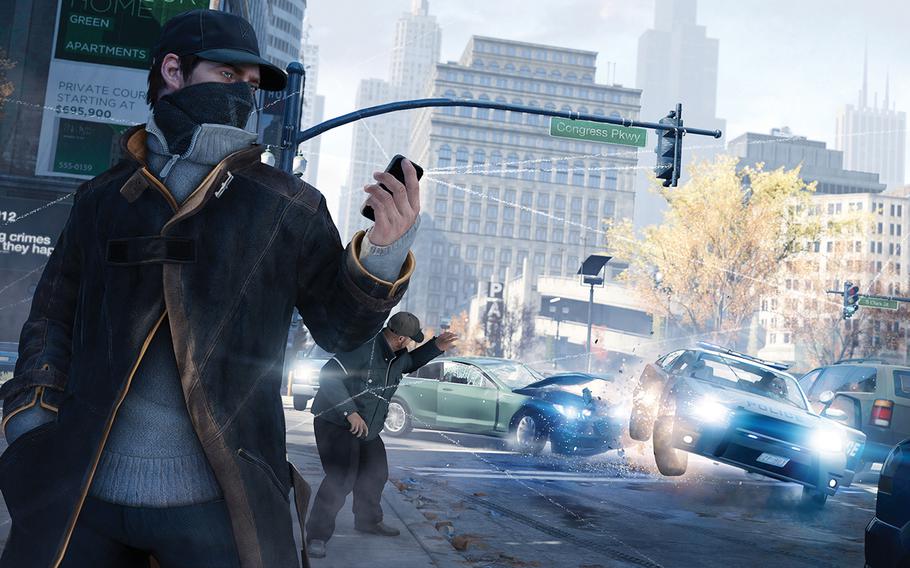 In the cyberthriller "Watch dogs," you can surreptitiously access security systems, bank accounts, cell phones and just about anything else linked to a computer. (Courtesy of Ubisoft)

The Electronic Entertainment Expo is always a dazzling showcase of what’s coming next in the world of video games. But the industry went into hype overdrive last week as two new and powerful consoles edged closer to their debuts.

Microsoft announced the Xbox One will launch in November and Sony announced its PlayStation 4 will be released in time for the holidays. As a result, most game publishers were eager to highlight their next-generation offerings at the event in Los Angeles.

A large percentage of those titles were simply the latest iterations of familiar franchises, such as “Battlefield 4,” “Call of Duty Ghosts,” “Madden NFL25” and “Forza Motorsport 5.” Each looked very impressive in its next-gen debut, but most of them seemed like they were no more than slicker versions of previous games. The core gameplay just didn’t seem to advance as quickly as the graphics. A few were actually a bit disappointing.

Other highly anticipated titles — such as “Batman Arkham Origins” and “Beyond: Two Souls” — will be appearing only on the current generation of consoles, which is disappointing for those eyeing the next generation.

All of the next-gen games looked great, with more-detailed graphics and realistic character movement and behavior. Many of the action games offered multiplayer modes that seemed to draw elements from massive multiplayer online games thanks to the incredible processing power of the PS4 and Xbox One. For example, other players could drop into your world to help defeat a particularly nasty opponent or become a new opponent.

However, the most interesting next-gen games seem likely to deliver much more than improved graphics, better mechanics or the ability to throw more fighters onto the battlefield.

Here are a few promising titles that were features in full demos at E3. Most are due this fall or next spring ... but don’t be surprised if some of them slide a little later on the calendar. A few will also be available on the current generation of consoles or on the PC.

The assassins are already a swashbuckling breed, and naval combat was exceptionally fun in “Assassin’s Creek III,” so it’s no surprise that Ubisoft has decided to set its time machine for the Golden Age of Piracy. Demos showed that the game covers all the traditional “AC” bases: stealth, parkour-style climbing and acrobatics, assassinations and — of course — treasure-hunting. And developers have tweaked the naval combat formula to make it more intense and fun. All consoles.

While some sequels seemed to offer a few upgrades for the new generation of consoles, developers of “Dead Rising” revamped, improved and expanded almost every aspect of the game. They’re delivering an open world teaming with more-aggressive zombies, the capability to find and create hundreds of weapons, great graphics and — best of all for longtime fans — no time limit on the action. Xbox One.

Bungie, the creator of “Halo,” is working on another sci-fi shooter with a heavy focus on multiplayer action. In “Destiny,” you will play as a guardian of the last safe city on an Earth that has been decimated by aliens. The E3 demo focused on two-player cooperative play that expanded to seven or eight players during a major encounter with alien forces. The action, characters and weapons were all very impressive. PlayStation 4 and Xbox One.

The medieval fantasy world of Tamriel will take on new life in this massive multiplayer online game, which will be available on next-gen consoles as well as PCs next year. The E3 hands-on demo was excellent by any measure, but the fact that a fully developed MMO would finally be available on consoles is exciting news. PlayStation 4, Xbox One, PC and Mac.

This time, Snake — voiced Kiefer Sutherland — heads to Afghanistan to fight Russians in the 1980s. Developers used terms like “open world,” “strategic freedom,” “deeper stealth” and “tactical espionage” to describe the game. I would say these add up to the term “simply awesome.” The game looks incredibly exciting and fun. Xbox One, Xbox 360 and PS3.

Time breaks down, sometimes stuttering and sometimes stalling, in this action game. You can use these breaks to your advantage by doing things like rescuing a woman from an explosion by calmly walking amid the flying shards of glass to pull her out. It looks pretty cool. The game will be linked to a companion TV series, which developers say will be influenced by the way the game is played. Xbox One.

At first glance, the Roman hero Marius Titus looks like a distant cousin of Kratos from PlayStation’s “God of War.” You’ll immediately notice the swords and sandals as well as the button combos in combat. However, the action and story are based on reality rather than myth, which gives Marius much more gravitas, as the ancient Romans would say. He’s definitely impressive, as modern Americans would say. Xbox One.

This sci-fi shooter delivered one of the most intense battle demos of E3. “Titanfall” — which was called “a multiplayer game with single-player elements” — allows you to fight on foot or in a large mechanized suit. Unlike the lumbering mechs of other games, this new franchise boasts nimble giants that pack a powerful punch. But foot soldiers are even more maneuverable, with the ability to pull off parkour-like moves as they evade opposing mechs and stalk enemy soldiers. Xbox One, Xbox 360 and PC.

In an interconnected world, hackers can be saboteurs or saviors. In this cyberthriller, you can surreptitiously access security systems, bank accounts, cell phones and just about anything else linked to a computer. It’s up to you to decide exactly how you wield your power. And don’t worry, your character isn’t a chair-bound geek living in his mother’s basement. There are plenty of car chases, fistfights and gunplay. PlayStation 4, Xbox One, Xbox 360, PS3 and WiiU.

B.J. Blazkowicz is still fighting Nazis, but this time it’s 1960 and the Third Reich has won World War II. Developers say the game has more narrative and the characters have more personality. The E3 demo revealed glimpses of both. It also revealed that developers didn’t forget to include the franchise’s trademark action. PlayStation 4, Xbox One, PS3, Xbox 360 and PC.

In the popular mobile game, you plant a garden full of feisty vegetables that are capable of fighting off hordes of rampaging zombies. In bringing the game to Xbox consoles, developers have created a co-op survival mode that plays like a whimsical version of “Nazi Zombies” and are planning a competitive multiplayer mode. The action is intense, off-beat and definitely worth checking out. Xbox One, Xbox 360 and PC.