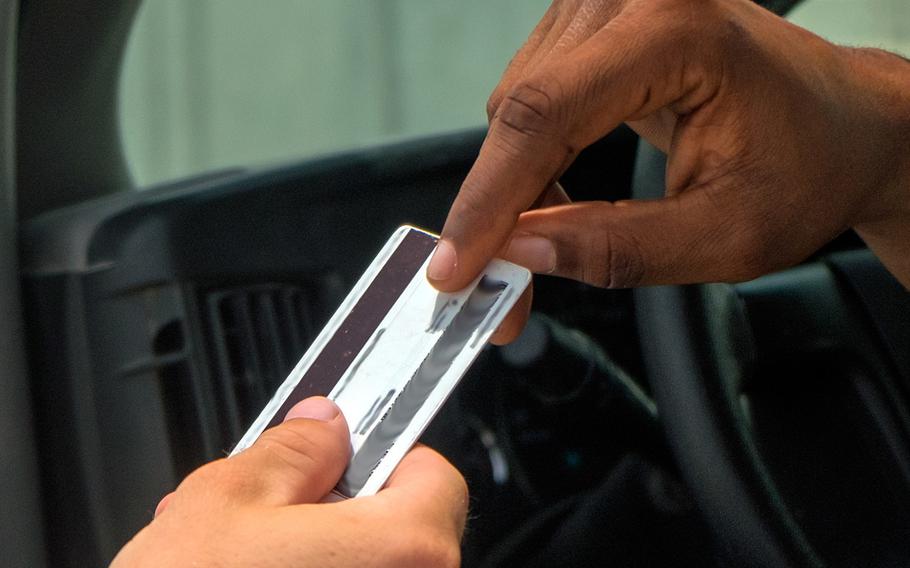 A Common Access Card is returned to an airman in 2017, at an undisclosed location in southeast Asia. The cards are ''vectors of disease,'' said the Army, which is looking for an alternative that uses biometrics. ( Preston Webb/U.S. Air Force)

The U.S. Army is looking for alternatives to traditional military identification cards, which are needed to gain entry to bases worldwide but are also “known vectors of diseases,” a service bid announcement said.

The Army in an April 1 solicitation said it will begin accepting proposals later this month for developing a system that would utilize biometrics and metadata, such as passwords.

The current system “results in the physical handling of cards which are known vectors of diseases and which can result in large percentages of personnel being exposed,” the Army said in its announcement.

The military’s Common Access Card is used by military personnel, both uniformed and civilian, to gain access to installations and is needed to access certain government computers. It’s also required for making purchases at commissaries and exchange shops.

But the Army says a physical card is “subject to compromise and in a pandemic environment results in a significant risk to the population that is to be protected.”

The risk of coronavirus infection from touching contaminated surfaces is generally considered low, The Centers for Disease Control and Prevention stated in guidance released Monday. However, it could be transmitted by touching surfaces an ill person has recently coughed or sneezed on, and then directly touching the mouth, nose, or eyes, the guidance stated. Colds and other illnesses can be transmitted the same way.

The Army’s aim is to develop a “Pandemic Entry & Automated Control Environment” that makes use of biometrics — such as facial recognition or other physical traits — and data such as a password to enable base entry, the bid announcement said.

“Use of PEACE provides real-time validation of persons at the entry point location as well as within the installation and various facilities,” the Army announcement said.

The Army didn’t make clear if the goal is to develop an alternative CAC or an outright replacement of the plastic card. But it did say it wants proposals that could be used across the Defense Department as well as in the civilian sector.

Within the military, the “PEACE” system would be used “to secure access to sensitive/classified areas, access and operations of critical weapons/respective platforms, and homeland protection in urban areas,” the Army announcement said.

Commercial applications could include venues “such as Disney World, where annual passes are sold as well as major sporting events whose tickets are subject to counterfeiting,” the Army said.

The deadline for submitting proposals is May 18.