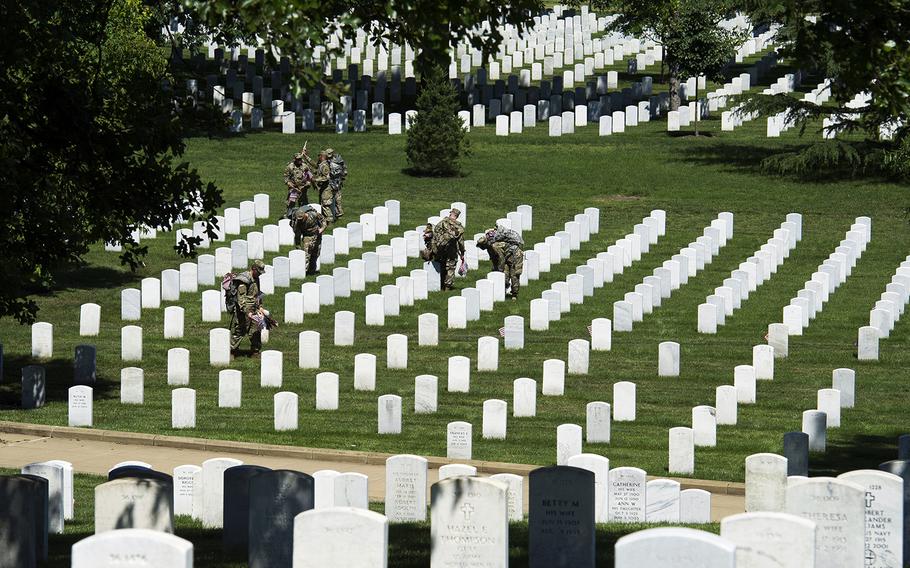 Members of the Army 3d U.S. Infantry Regiment, The Old Guard, place flags at the headstones of fallen military members during its annual Flags In ceremony at Arlington National Cemetery on May 24, 2018, in Arlington, Va. (Cliff Owen/AP)

A House bill seeks to afford enlisted Medal of Honor recipients and former prisoners of war the right to be buried with full military honors at Arlington National Cemetery.

Those honors, which include an escort and a horse-drawn caisson, are currently reserved only for officers and servicemembers killed in action.

The Full Military Honors Act of 2018 was introduced to the House Armed Services Committee on Sept. 7 by Rep. Mike Bishop, R-Mich., Sam Johnson, R-Texas, and Tim Walz, D-Minn. The congressmen are working to bring the legislation before the full chamber this fall.

“Medal of Honor recipients and POWs have earned and deserve nothing less than full military honors,” Walz said in a statement. “As a retired enlisted soldier of 24 years, I’m proud to join in introducing the Full Military Honors Act. To help ensure we honor the sacrifices these heroes and their families have made for our country, we must pass it without delay.”

Staffers in Bishop’s office said they learned of the issue earlier this year after the family of Robert Fletcher — a former Korean War POW — spoke out against the policy. Fletcher, a Buffalo Soldier and Michigan native, died Feb. 12 and was interred at Arlington on June 4.

“America’s POWs and Medal of Honor recipients have sacrificed immeasurably in service to the United States — regardless of their rank …” Bishop said in the statement. “This has been an issue for too long, and my legislation will ensure those who have gone above and beyond the call of duty are provided the full military honors they have earned for their end of life ceremonies.”

The issue resonated with Johnson, an Air Force veteran of the Korean and Vietnam wars who was shot down over North Vietnam in 1966 and was held captive for nearly seven years.

“During my time in the infamous Hanoi Hilton, many of my fellow POWs and I were isolated in cramped cells. We spent months in leg irons, years in leg stocks, and endured extreme starvation and torture,” he said in the statement.

“My fellow POWs who served honorably demonstrated the utmost patriotism, but not all of them were eligible for full military honors at their burial, simply due to their rank. I believe this is wrong. ANY veteran who served honorably as a Prisoner of War or whose actions earned them the Medal of Honor has already demonstrated extraordinary dedication to defending Freedom. In return, they deserve to have the country they fought for bestow full military honors if they are eligible to be buried at Arlington National Cemetery.”

Fletcher’s daughter, Kanda, said she cried when she heard the news.

“I know my dad is just grinning from ear to ear,” she wrote in an email this week. “We cannot change my father’s burial, but if I can make it easier for any still living former POWs and their families when their time comes, I will do whatever it takes. There should be no shame in having served our country, nor should a family have to be angry, disappointed, embarrassed, or whatever because their former POW was enlisted and will not receive burial with full honors.”

Burial eligibility for former POWs and Medal of Honor recipients is established by the Code of Federal Regulations, Arlington officials said. Any former POW who served honorably and died on or after Nov. 30, 1993, can be buried in-ground there. It also allows burial for recipients of the Medal of Honor, the Distinguished Service Cross, the Air Force Cross, the Navy Cross, the Distinguished Service Medal, the Silver Star or the Purple Heart.

A Defense Department instruction titled “Military Funeral Support,” sets a standardized baseline of services, including a two-person uniformed detail, the playing of taps, the folding of the flag and its presentation to the family of the deceased, Arlington officials said. On top of the department’s standardized guidelines, the veteran’s service branch also has discretion over which, if any, additional honors are bestowed.

Arlington follows an Army regulation titled “Salutes, Honors and Visits of Courtesy,” as administrator over the cemetery, officials said. Per Army regulations, the minimum for enlisted servicemembers eligible for in-ground burial is to provide a casket team, a firing party, the playing of taps by a bugler and a chaplain. This is what Fletcher received.

Arlington officials said earlier this year they can barely keep up with the current demand for full-honors burials. There are only eight horse-drawn caisson slots per day, and the cemetery performs up to 30 burials, officials said. There is a minimum of a four-month wait to receive standard honors at Arlington and a seven- to nine-month wait for full honors and caisson.