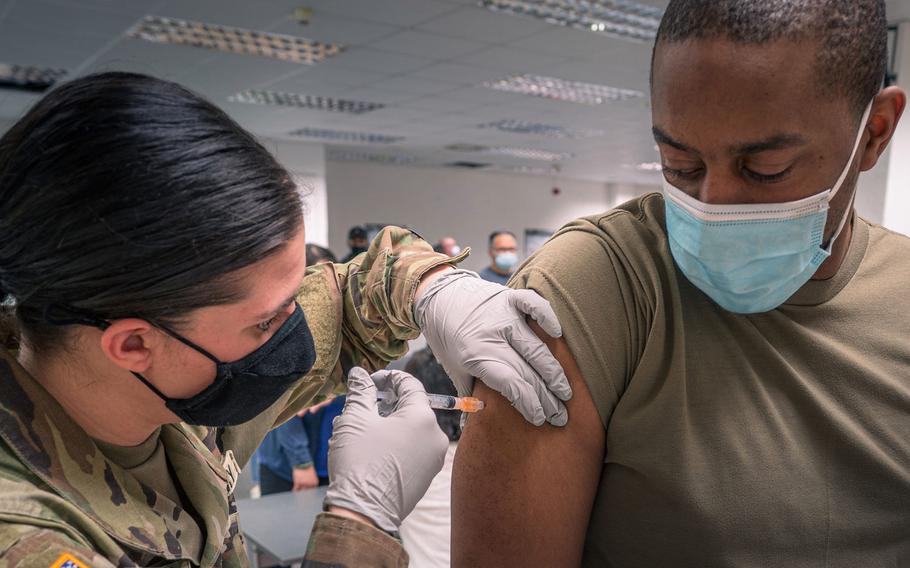 Rep. Jimmy Panetta, D-Calif., urged Biden to issue a waiver to allow the Pentagon to make coronavirus vaccinations mandatory for troops, about one-third of whom are declining the inoculations, according to Pentagon estimates. The Defense Department cannot mandate service members receive any of the three coronavirus vaccines being provided to the American public because the Food and Drug Administration approved them on an emergency authorization.

Only the president has the power to override that regulation, Panetta said, asking Biden to issue a waiver as soon as possible.

“Vaccinating every eligible service member will improve readiness and have an immediate and positive impact on the communities in which they serve,” Panetta, a Navy veteran, wrote in the letter signed by six other House Democrats. “Requiring DOD to obtain informed consent prior to vaccination is not only harmful to our national security, but contrary to the best interests of service members, their families, communities and colleagues.”

Defense officials have acknowledged they have had difficulty convincing some troops to receive the shot, largely due to skepticism about the vaccines’ safety and efficacy. They have said at least some of that hesitancy is due to vaccine misinformation rampant on social media. Top Pentagon officials including Defense Secretary Lloyd Austin have repeatedly implored troops to take the vaccination as soon as they are eligible, insisting the shots are safe.

Panetta’s office attributed much of the disinformation to China and Russia, which have worked to undermine confidence in American-developed vaccines and boost other nations’ interest in their own versions.

Other service members have declined the shots simply because they have the power to refuse it unlike other fully FDA-authorized inoculations required by the Defense Department, defense officials have concluded.

But the Pentagon is working hard to convince troops to change their minds, Robert Salesses, the Pentagon’s homeland defense chief, and Air Force Maj. Gen. Jeff Taliaferro, the Joint Chiefs of Staff vice operations director, told the House Armed Services Committee on Feb. 17. They cited preliminary data at that time indicating about one-third of eligible troops were turning down the opportunity to receive the injections. Pentagon officials have declined to release further information about how many troops are refusing vaccinations.

“We believe, of course, the vaccine is the right thing to do,” Taliaferro told the House committee “It's clearly safe for service members, and we need to continue to educate our force about its safety and ensure leadership is involved in the discussion of the benefits of these vaccines.”

The Pentagon also has not said precisely how many service members it has vaccinated to date. The Navy said Wednesday that it had administered more than 224,000 doses to sailors, but it did not specify how many were second shots. The Marine Corps said this week that more than 37,000 Marines had been fully vaccinated and another 57,000-plus had received their first shot. Army, Air Force and Space Force officials declined to provide an estimate of how many of their service members have been vaccinated.

In his letter, Panetta, a veteran of the war in Afghanistan and a House Armed Services Committee member, insisted the Defense Department would undoubtedly make the vaccine mandatory once it gains full authorization, and speeding that process up via a presidential waiver could “save lives.”

The White House did not immediately respond Wednesday to a request for comment on the letter.

“The bureaucratic process of final approval of these vaccines … will waste precious time in the department’s fight against this virus,” Panetta wrote. “The end result of mandatory vaccinations for members of the armed forces will almost certainly be the same.”