Congress to decide how Tricare pharmacy fees will rise in 2013 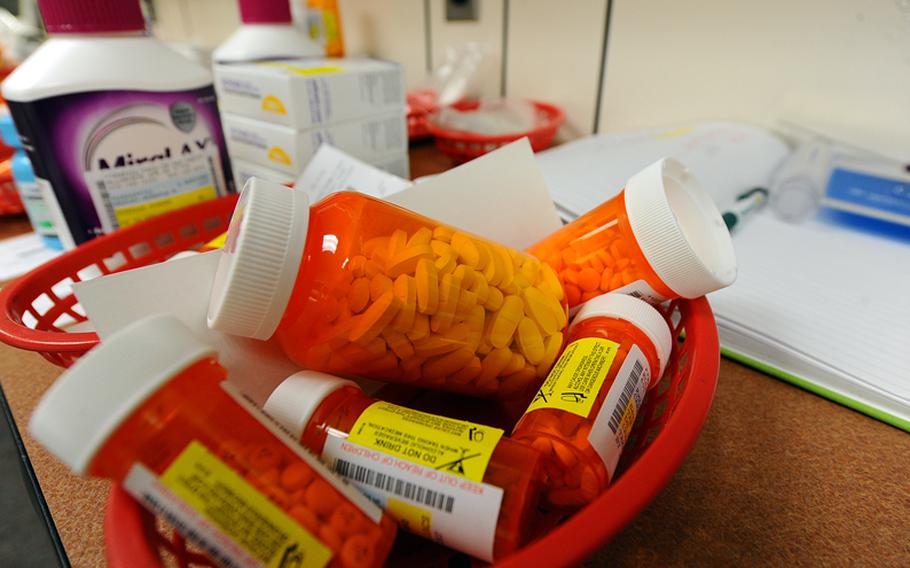 Processed medications await pick up at the pharmacy on Ellsworth Air Force Base, S.D., on Oct. 25, 2011. (Zachary Hada/US Air Force)

The House and Senate will decide in the next few weeks how military pharmacy fees will be raised in 2013, a step that arguably will be the most significant taken to date to slow growth in military healthcare budgets.

Out-of-pocket costs for military families and retirees who have prescriptions filled in the Tricare network of retail pharmacies depend on final language in the fiscal 2013 Defense Authorization Act. Congress intends to pass a final defense bill by mid-December.

The House-passed plan for pharmacy fees could win over Senate colleagues during final negotiations on the bill. It already is more palatable with military associations. It calls for more modest co-pay hikes than proposed by the Obama administration. But it would achieve the same first-year savings by requiring beneficiaries 65 and older to use the Tricare mail order pharmacy program for refills of all maintenance drugs, those that control chronic conditions like high blood pressure and diabetes.

Any brand name prescription filled by mail rather than in drug stores or supermarkets saves the department 27 percent, on average, said Rear Adm. Thomas J. McGinnis, chief of pharmaceutical operations for Tricare.

Officially the administration continues back the pharmacy fee increases it unveiled last spring. Prescriptions would remain free on base, and the co-pay for generic drugs would stay at $5 at retail outlets. But the administration plans to raise the $12 co-pay at retail to $26 for brand names on the military formulary. The formulary is the department&rsquo;s list of approved drugs based on price and effectiveness. The administration also wants to ban retail outlets from filling prescriptions for non-formulary drugs, forcing beneficiaries to use mail order for the most costly brand name medicines.

Also the new higher co-pays would climb by $2 more each year until reaching $34 in 2016. After that, they would be adjusted yearly based on overall medical inflation. Co-pays for brand name drugs at mail order also would jump to $26 from $9, for a 90-day supply, and then climb slowly to $34 by October 2016, under the administration&rsquo;s plan

Tricare already has authority to make these changes. The question is will Congress step in and modify the plan. The Senate Armed Services Committee, in marking up its version of the 2013 National Defense Authorization Act, stayed silent on the issue. So unless the bill is amended on the floor next week to interfere with the plan, the Senate will signal Tricare to proceed with planned fee changes. Last June, the department even published a proposed regulation to do so, and invited public comment.

It withdrew the proposed regulation when the House passed in its version of the defense bill with an alternative pharmacy fee plan. The House proposes bumping the co-pay for formulary brand names at retail only to $17 versus $26 proposed by the administration. It also would continue to allow prescriptions for non-formulary drugs to be filled at retail, but would raise the co-pay for these more costly drugs to $44 versus the current charge of $25.

Given actions to date by the House and the Senate committee, some retail pharmacy fee increases are a certainty. The battle ahead is details.

After the Senate passes its defense bill, a House-Senate conference committee will smooth out any differences, including on pharmacy co-pays. McGinnis suggested the House plan could take longer to implement, delaying new fees perhaps until April 1, given the requirement that beneficiaries 65 and older use mail order for maintenance drugs.

&ldquo;We would have to do a contract modification with Express Scripts,&rdquo; he said, referring to the company that administers Tricare pharmacy programs, &ldquo;so that would take a little bit longer to implement.&rdquo;

Also there would have to be an aggressive information program to explain to senior beneficiaries that prescription refills must be filled by mail order. The House bill would set this requirement for at least a year. But McGinnis said once beneficiaries try mail order, 98 percent of them like it and choose to continue to use mail order over their local pharmacies.

If the House plan does prevail, elderly beneficiaries will have time to absorb details before it starts. One of those details is certain to be a &ldquo;fail safe&rdquo; provision that would allow a patient to get a 30-day supply of any maintenance drug at retail if there&rsquo;s a hitch in the mail order process.

Tricare estimates that it pays an average of $324 every three months for a brand name medication filled at retail but the cost falls to between $233 and $239 through mail order or if filled on base. If beneficiaries ask for a generic substitute for any brand name drug, the department three-month cost falls to about $60.

Beneficiaries too save money with mail order because, for the same co-pay prescriptions typically are filled for 90 days versus 30 days at retail. And generic drugs are provided at no charge through mail order.

Given the incentives and the convenience of mail order, McGinnis said usage has popped within the military community over the past year. In June of 2011, a million prescriptions a month were filled by mail. That monthly total has climbed since then to about 1.5 million.

McGinnis said the departure of Walgreens from the Tricare retail network last January helped in that regard. Many former Walgreens customers shifted to mail order and liked it, McGinnis said.

&ldquo;We are not getting any complaints from anybody. That really worked out well [and] saved us a lot of money,&rdquo; the pharmacy chief said.

Without Walgreens, the network still has 57,600 pharmacies. To put that into perspective, McGinnis said, there are 36,000 grocery stores, 14,000 McDonalds and 11,000 Starbucks in the United States.