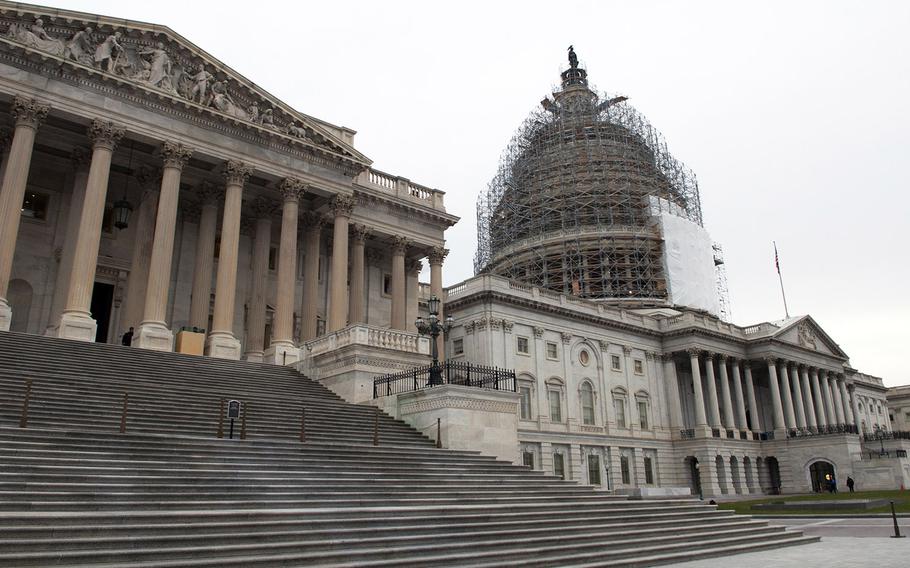 WASHINGTON — Congress approved a defense authorization bill Friday, setting priorities for the military and clearing the way for cuts to troop benefits next year.

The bill passed a final 89-11 vote in the Senate and lays out plans for military personnel, equipment such as the A-10 Thunderbolt aircraft and the war in Iraq and Syria. It sets the servicemember pay raise at 1 percent and tightens up housing allowances and Tricare pharmacy coverage as the Department of Defense grapples with mandatory caps on its spending in the coming years.

The cuts were requested by the Pentagon and White House and finally approved in the National Defense Authorization Act despite opposition in the House. Military brass had lobbied for deeper cuts but the bill takes some first steps toward what many in Congress believe will be years of reductions in personnel costs, unless lawmakers can strike a deal to lift the budget caps designed to deal with the national debt.

Congress on Friday was also debating a massive $1.1 trillion omnibus appropriations bill that doles out the money for the NDAA priorities. A Senate vote was expected by Saturday.

The NDAA calls for a $495.5 billion base defense budget and $63.7 billion for overseas military operations related to the war. Here are the key changes to benefits:

Servicemembers have gotten 1.8 percent pay raises but the NDAA allows President Barack Obama to continue with a plan to reduce the increase to 1 percent. The military’s basic housing allowance covers 100 percent of rental costs for troops and the bill brings that down to 99 percent. The Pentagon wants to slow inflation increases in the coming years until it pays only 95 percent of costs, with troops covering the remaining amount. It will increase Tricare out-of-pocket costs for prescription medicines by $3 per year, which puts off any decision of more copay increases after 2015 but still tracks with a Pentagon plan to increase troop contributions by $30 over a decade.Meanwhile, the bill offers some protections for the A-10, known as the Warthog, which is much loved by infantry troops but slated for retirement by the Air Force.

A group of senators including John McCain, R-Ariz., and Kelly Ayotte, R-N.H., championed the aircraft and waged a campaign over the past six months to keep it flying. They say the A-10 is the most capable at close air support operations in war zones and that it saves American lives.

The $495 billion NDAA blocks the retirement but allows the service to reduce maintain and flying time for dozens of Warthogs to save money.

It also bars the Army from transferring Apache helicopters from the National Guard to its active-duty units, while allowing the Navy to spend $450 million on EA-18G Growler aircraft and continuing buying three littoral combat ships.

The $63.7 billion Overseas Contingency Operations portion of the bill increases funding for troops in Iraq, and greenlights an Obama administration plan to train and equip moderate Syrian rebels against the Islamic State.

The NDAA vote in the Senate came Friday despite some opposition from Sen. Tom Coburn, R-Okla., who opposed public lands legislation that was tacked onto the bill and unrelated to national defense.

Coburn said the package of about 60 national park items, which sets aside vast new tracts of public land, could cost the federal government hundreds of millions per year. But his attempt to delay the NDAA and remove the items was rejected.