Commission: Should women have to register for the draft? 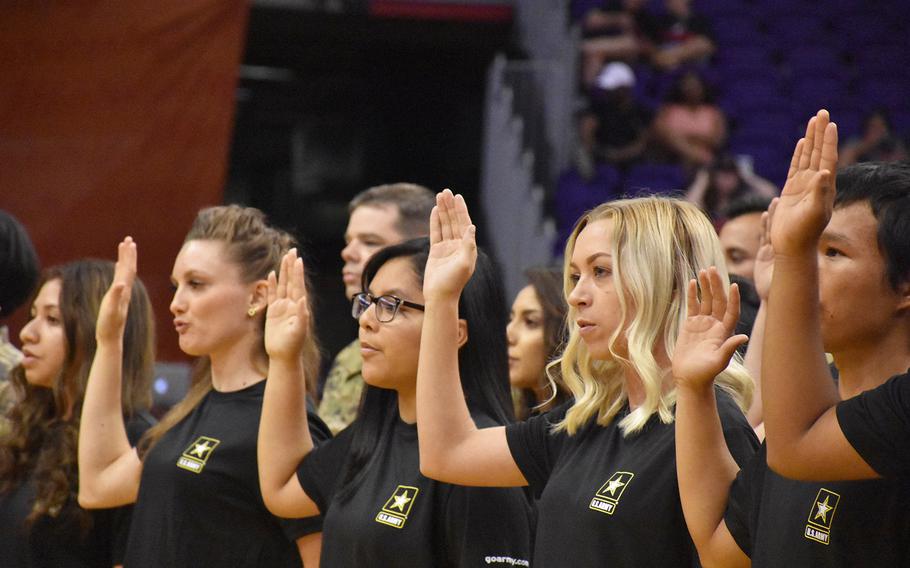 Future soldiers from the Phoenix Recruiting Battalion participate in a mass oath of enlistment ceremony on July 19, 2018, (Alun Thomas/U.S. Army)

WASHINGTON — More than three years after combat roles were opened to women, a commission is considering whether women should be required to register for the Selective Service.

The National Commission on Military, National and Public Service, established by Congress in 2016, has released an interim report about its work to find ways to increase participation in military and public service.

One option is having women register in the Selective Service System.

All men between ages 18 to 25 must be registered as part of the pool to draw from if there is another draft. In 1981, the Supreme Court ruled that women did not have to be registered due to the services not allowing women in combat roles.

The interim report gives insight into some of the policy recommendations the commission is considering for its final report, which will be presented to Congress, the president and the public in March 2020.

For now, the commission will not say whether it will recommend that women register; the chairman said the group has not come to a decision and is seeking more input from the public.

“I can tell you that over the course of the last year as we’ve traveled around the country, people have very definitive opinions on this issue,” Dr. Joe Heck, chairman of the commission, said as the report was released Wednesday at the Newseum in Washington.

Heck is a retired brigadier general and surgeon in the U.S. Army Reserve and served as a U.S. representative and senator from Nevada.

The commission is also considering whether to include the education and skills -- such as cyber -- of those who are registered, as well as identifying, evaluating and protecting conscientious objectors who would be prepared to serve in other ways.

Completely getting rid of the system is being discussed as well.

“So the commission is actually looking at whether we still need it. … If we do need it, whether it should be changed to meet the needs of the future,” said Debra Wada, the commission’s vice chair for military service.

The report found that many Americans do not understand the Selective Service System; the process is passive with most men registering when they get a driver’s license or apply for federal student aid. Not registering comes with penalties, including not receiving federal student aid and not being eligible for government jobs.

Military service is also not considered an option by about 4 in 10 Americans due in part to limited interactions with the military or veterans, according to the report. Of Americans ages 17 to 24, 71 percent do not meet the current standards to serve in the armed forces. Last year, the Army did not meet its recruiting goals.

Knowing that, and considering that the National Defense Strategy Commission recently found that the armed forces would be woefully unprepared for conflict, “we must be prepared and pay more attention to the intent of the selective service and the future of military service,” Wada said.