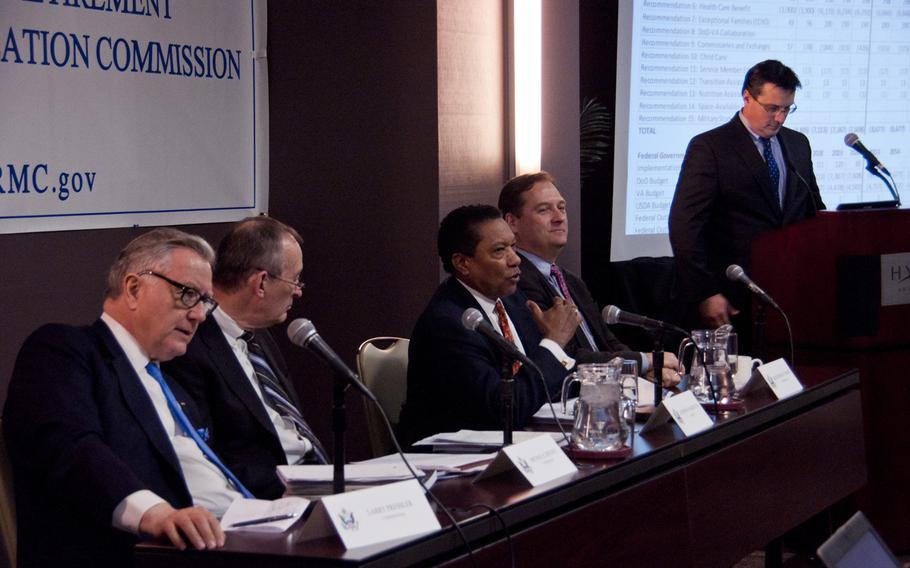 The Military Compensation and Retirement Modernization Commission is urging President Obama to endorse and Congress to enact sweeping changes to military health insurance and retirement options to “empower” service members to make choices that would drive down compensation costs.

The panel’s final report makes 15 recommendations that, if fully implemented, would cut personnel spending for the departments of Defense and Veterans Affairs by $12 billion a year. The most surprising idea is to replace the triple-option Tricare program for military families and working-age retirees with a selection of commercial health insurance plans.

On retirement, current force members could stay under their High-3 plan. But the commission forecasts 40 percent of them, if given a chance, would replace that plan offering no benefits before 20 years’ service with a “blended” plan that lowers annuities for careerists but offers some retirement savings to the 83 percent of service members who leave short of 20 years.

That menu of health insurance offerings to the military would be similar to the Federal Employees Health Benefits Insurance Program (FEHBP) for civilians. Indeed the Office of Personnel Management, which administers FEHBP, would also run the military plans. But rather than saddle active duty families with the same costs paid by civilians – roughly 28 percent as premiums – they would receive a new two-part Basic Allowance for Health Care (BAHC) to cover at least most of their new health insurance costs.

One part would be paid to the selected insurance plan directly and cover member premiums for an average-priced plan. Part two of BAHC, to cover co-pays and deductibles, would go to members to use as they choose. The intent of those dollars is to incentivize military families to be careful consumers of health care. They are not today, the report says. Tricare Prime users, for example, make 55 percent more outpatient visits than do civilians enrolled in HMOs who have to cover co-pays out of pocket.

Participating insurance plans would have to include military treatment facilities in their provider networks. Patients and plans would be enticed to use on-base care with offers of reduced co-pays and fee reimbursements, particularly for complex medical cases that keep wartime skills sharp.

Tricare administrative costs are excessive, the report says, and yet too many beneficiaries don’t get timely care or quality care. Also, Tricare provider networks have coverage gaps because contractors set physician fees too low. Relying on commercial insurance would improve access, speed referrals for specialty care, save millions of dollars in administrative costs and leave beneficiaries more satisfied, the commission predicts.

The commission would leave unchanged Tricare for Life, the golden supplement to Medicare that elderly retirees have prized for a dozen years.

Working-age military retirees and families, however, would fare less well. Initially they would have to pay five percent of health plan premiums. That cost share would grow by one percentage point a year over 15 years so that retirees under age 65 eventually pay 20 percent of health insurance costs. The costs would stop when eligible for Medicare and Tricare for Life.

Commissioners say beneficiaries, from during their site visits and public hearings, expressed a desire for more health care choices than the ponderous Tricare program can provide.

The retirement plan they propose for new entrants and for any current members drawn to its features would still provide an immediate although reduced annuity after 20 or more years’ service. But among its new features would be a Thrift Savings Plan with government matching of member contributions up to five percent of monthly basic pay. This would be portable like 401k plans in the private sector. TSP would vest after only two years and members could roll it into civilian employer 401ks on leaving service.

Also, 12 years into a military career, members would receive a lump-sum “continuation” payment, equal to at least two-and-a-half months of basic pay, more if they have a critical skill. To take the cash, members would have to agree to serve four more years. Presumably 16 years in, most careerists would decide to serve for at least 20 years to gain the immediate annuity. But with the new plan retiring members would have more choices.

They could draw an immediate annuity based on 2 percent (not the current 2.5 percent) of average basic pay for each year served; or accept a lump sum amount and a smaller annuity; or accept a full cash out and forego any military annuity until they age into social security.

At that point, military retired pay would start and equal the retired pay of their peers who elected to draw full annuities since time of retirement.

Other recommendations would strengthen support of families with more childcare and improved access to services for special needs children.

The commission doesn’t endorse ending the offset of Survivor Benefit Plan payments for thousands of widows who also receive VA Dependency and Indemnity Compensation (DIC). But it would give retirees the option of paying higher SBP premiums to ensure that their surviving spouses, if deemed eligible for DIC, would also receive full SPB.

Commission ideas to “safeguard” the Post-9/11 GI Bill could spark some of the sharpest protests from military and veterans associations. One would impact many of the more than 423,000 members who have elected to transfer GI Bill benefits to family members in return for serving longer. The transferred benefit now includes a housing stipend equal to monthly housing allowance locally for a mid-grade enlisted member. The commission says that stipend shouldn’t be paid to family member students after June 2017 even if it was part of the original deal.

Next week: Commissioners present and defend these proposals and more before the Senate and House armed services committees.