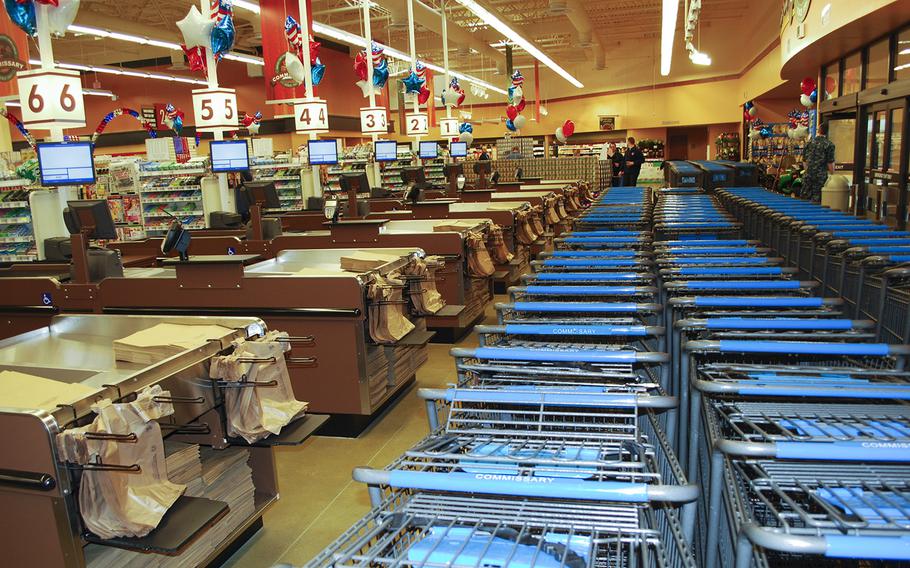 Consolidation of the Defense Commissary Agency (DeCA) and three separate military exchange services into a single Defense Retail Activity (DeRA) is gaining support among policymakers inside the Department of Defense and perhaps a key congressional subcommittee, a source reports.

The idea to merge all military stores under a single agency is a major recommendation of the Military Compensation and Retirement Modernization Commission. It sees savings to the Department of Defense of $426 million annually by fiscal 2020 and, more importantly, commissioners say the move will preserve prized shopping discounts for millions of military patrons.

Over decades, the three exchange services – Army and Air Force Exchanges Service (AAFES), Navy Exchange (NEX) and Marine Corps Exchange (MCX) — have been able to fend off all attempts to merge them into a single for-profit resale operation, arguing that service-unique cultural identities had to be maintained, and that complex disparities in how stores operate and profits are used make a merger costly and impractical.

Today, however, military stores face threats to their survival not seen before. Smaller defense budgets mandated by the 2011 Budget Congress Act have the Department of Defense urging Congress to slash $1 billion a year from the Defense Commissary Agency’s $1.4 billion budget.

Advocates for military shoppers, and for manufacturers and suppliers doing business with base stores, have formed a “Coalition to Save Our Military Shopping Benefits.” In an April 16 letter to the armed services committee, the coalition says DoD’s plan “will destroy the commissary benefit” and “severely impact young families and fixed-income retirees.”

It also argues that obliterating the commissary benefit will eliminate tens of thousands of “much needed jobs for the military community.”

Exchanges services, meanwhile, already face sharply falling sales due to the post-war force drawdown, closure of profitable stores overseas and competition for sales from aggressive discounters off base. The exchange services fear a far steeper drop in sales if shopper savings at commissaries are allowed to fall from 30 percent down to 10 percent, as DoD proposes in its plan to end budget support of most stateside commissaries by 2017.

The logic behind the DoD plan to cut the annual appropriation for commissaries by 70 percent goes something like this: Yes, patron savings would fall at stateside stores, and staffs and store hours also would be reduced. But enough patrons will continue to shop on base for a 10 percent savings that more revenue from raising prices would sustain the benefit stateside, while overseas commissaries would see no cuts.

The flaw in that logic, suggests the think tank RAND in a new report, is that given the availability of substitute commercial stores for stateside patrons, any increase in revenue realized by higher store prices would be offset “disproportionately” by reduced revenues from fewer goods sold.

In other words, RAND says, enough shoppers would turn away that commissary revenues would fall, putting discount shopping on base into the kind of death spiral that advocates have forecast. Ironically, it was Defense officials who commissioned RAND to review past studies of how price increases impact grocery retailers in the private sector.

The save-our-benefit coalition, in their letter, cites the RAND report as confirming “what military families have been saying for months: that higher prices and reduced savings will drive them to shop elsewhere – eliminating their earned benefit, impacting exchange sales and putting at risk millions in exchange dividends that fund vital community support program.”

The compensation commission also had found fault with department’s plan to slice $1 billion from the commissary subsidy.

“Such a significant reduction in funding would necessitate a change in the commissary business model. Groceries could no longer be sold at cost, discounts would be significantly reduced and the financial benefit to service members would be diminished,” says the commission January report.

Exchanges also would be impacted. The commission notes a recent estimate from the Army and Air Force Exchange Service that 20 to 30 percent of its foot traffic, representing at least $1 billion of $6 billion in total annual sales, is attributable to exchanges “proximity to commissaries.”

So if commissary sales fall, so do exchange sales, and so do profits from exchanges used to fund on-base morale, welfare and recreational activities, from gymnasiums and libraries to movie theaters and golf courses.

Defense officials aren’t abandoning their call to slash funding for commissaries. But they are said to be directing the exchange services to get behind a consolidation plan.

Rep. Joe Heck (R-Nev.), chairman of the House armed services subcommittee on military personnel, also is said to favor the commission’s call for consolidation store operation under a single agency. The depth of Heck’s support will be known by next Thursday when his subcommittee is to mark up, or reshape, personnel-related provisions of the fiscal 2016 defense authorization bill for consideration of the full committee.

Heck and his staff have been reviewing commission findings on the importance of shopping discounts to service members, retirees and their families. The commission also cites a 2005 internal task force study that found “commonality” across 96 percent of functional processes of the three exchange services, thus arguing for merging separate systems.

The commission proposes going further, to consolidate under a single agency all back-of-the-store functions across all exchange operations and commissaries. Although commissaries rely on taxpayer support and exchanges are self-supporting, and also generate profits to support other base activities, the two types of stores “perform similar missions, for similar patrons, with similar staffs, using similar processes,” the commission says.

Consolidating these operations would allow sharing of resources, elimination of redundancies, increased operational flexibility, alignment of incentives and policies to drive efficiencies — all to improve the viability and stability of the shopping benefit, the commission says.