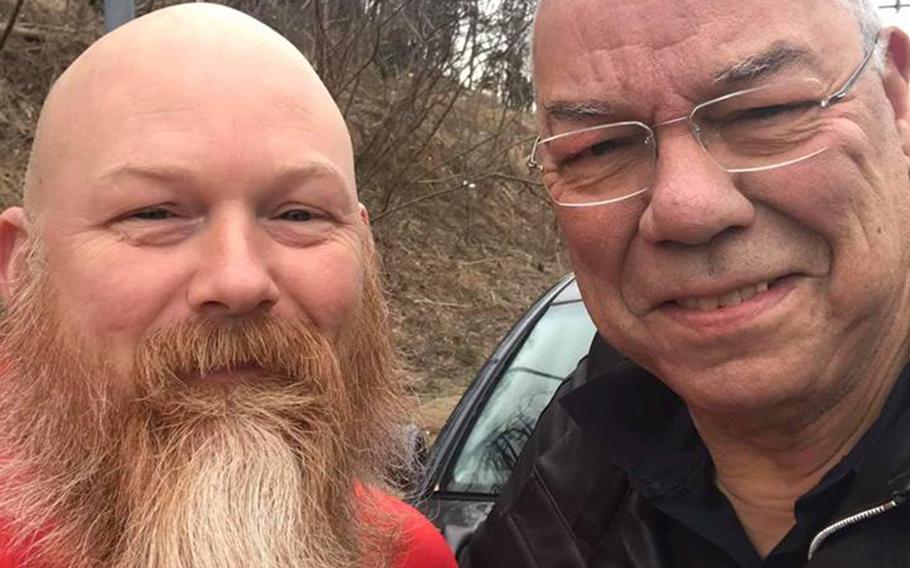 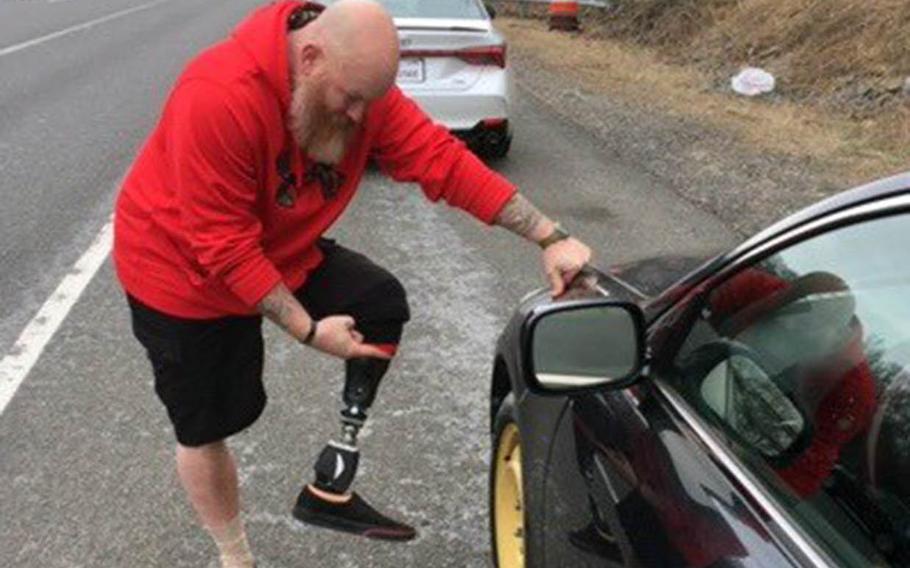 A leg lost in Afghanistan didn’t deter a Virginia man from helping a fellow motorist change a flat on his way to an appointment Wednesday at Walter Reed National Military Medical Center.

Anthony Maggert — a self-described Marine Corps veteran who walks with the aid of a prosthesis — got a surprise when the person he stopped to help turned out to be retired four-star Army Gen. Colin Powell.

The former secretary of state was so impressed by Maggert’s good deed that he posted a photo of the pair along with a note of thanks that’s been liked hundreds of thousands of times on his Facebook page.

“I was on my way to Walter Reed … for an exam,” Powell wrote in the post. “As I drove along Interstate 495 my left front tire blew out. I am a car guy and knew I could change it but it was cold outside and the lug bolts were very tight.”

Powell, an avid mechanic known for restoring old Volvos, wrote that he’d jacked his car up and removed several bolts when a vehicle pulled in front of him.

“As the man got out of his car I could see that he had an artificial leg. He said he recognized me and wanted to help me. We chatted and I learned that he lost his leg in Afghanistan when he worked over there as a civilian employee. He grabbed the lug wrench and finished the job as I put the tools away.”

The pair took a photo together and parted ways without exchanging names, but Maggert followed up with a message to Powell that read:

“Gen. Powell, I hope I never forget today because I’ll never forget reading your books. You were always an inspiration, a leader and statesman. After 33 years in the military you were the giant whose shoulders we stood upon to carry the torch to light the way and now it is tomorrow’s generation that must do the same.”

“You touched my soul and reminded me about what this country is all about and why it is so great,” he wrote. “Let’s stop screaming at each other. Let’s just take care of each other. You made my day.”

Maggert, who goes by the nickname “Chef Maddog Maggert” on Facebook, posted photos of the encounter on his own page with the caption:

“When General Colin Powell has a flat and he only has a one legged guy to help fix the flat.”

He said, in comments under the post, that the incident happened quickly.

“I didn’t care who it was, it was someone in need in a bad spot. The least I could have done was lend a hand … made it even better when the first thing I said was ‘your Colin Powell-let’s fix that flat’. Then he said ‘why the hell do you want to help me’. Cuz even a 4 star needs a little help changing a flat,” he wrote.

In a video posted Thursday about his “15 minutes of fame,” Maggert said both he and Powell made it to their appointments at the hospital on time.