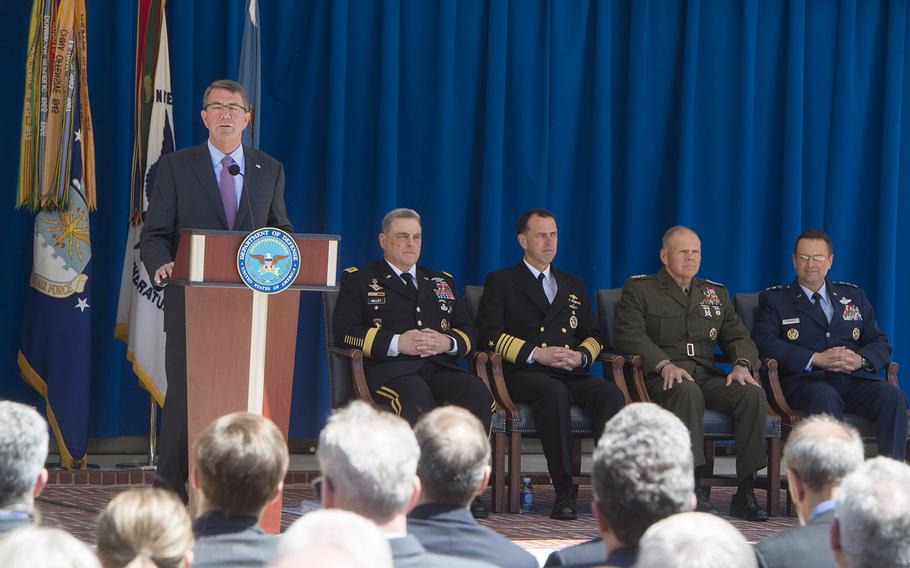 WASHINGTON — The U.S. military must modernize its antiquated officer promotion system to give leadership greater flexibility to retain top performers, Defense Secretary Ash Carter said Thursday as he unveiled his most groundbreaking proposals to the Pentagon’s personnel policies to date.

Carter, surrounded by all four service chiefs and the three civilian service secretaries in the Pentagon’s courtyard late Thursday morning, announced four proposed amendments to the long-standing law that strictly governs military officer promotions. The proposals would relax time-in-rank restrictions that officers face, weigh promotions more heavily on merit than seniority, allow civilian experts in some specialized fields to commission at an advanced grade and end the long-standing “up-or-out” promotion system for some officers serving in high-tech or in-demand specialties.

The proposals to amend the 1980 Defense Officer Personnel Management Act, or DOPMA, would require approval from Congress. The new proposals are part of Carter’s “Force of the Future” initiative that he has touted since first taking office in February 2015.

After announcing the new proposals Thursday, Carter told Stars and Stripes that he saw no reason the plan should be nixed by lawmakers and it should be included in the upcoming defense authorization bill.

“This is a direction that leaders on The Hill, particularly on our (defense) committees, have a lot of knowledge about,” he said. “I think they recognize that the all-volunteer force is something we’ve got to keep adjusting in how you approach it so that we have tomorrow as fine a force as we have today.”

The new plans revealed Thursday would allow officers more time at a rank if they have not completed all the requirements ahead of promotion, such as needed education. In the past, those officers likely would have been separated from the service. This is specifically a problem for officers who pursue outside responsibilities, such as higher education while in service, Carter said.

It also proposes expanding specialties, allowing civilian experts to commission as an officer at a higher rank than a second lieutenant or ensign. This will permit the service to better compete with the private sector.

Some specialties, such as doctors, already allow for this, but Carter wants to see it expanded to other areas including in the cyber domain.

“In most … specialized fields, there’s no way for the services to recruit a properly skilled and experienced civilian who wants to serve in uniform without having them start at the lowest ranks,” he said. “… The services need to be able to waive select DOPMA constraints to very quickly build up expertise in a critical career fields. This will enable them to respond to an uncertain future, in ways that can be tailored to their unique capability requirements.”

Those changes, Carter said, would likely never exist for front-line combat officers, who can only achieve the expertise to move forward in leadership roles through military service.

He said he has leaned heavily on senior military leaders including the uniformed service chiefs to shape his “Force of the Future” goals. He said the proposals announced Thursday were largely based on their ideas and needs for flexibility.

“I trusted them to give me their best recommendations, which these are,” Carter said. “And then I trust them to implement them, because the essence is to give them latitude, not to set rules, but to create flexibility where the existing rules are too narrow and too rigid.”

The Pentagon will continue to seek other changes under Carter’s leadership, he said, but those announced to date largely cover his vision when he first took office.

“I stared on the first day I came in and we have been doing one link after another basically as we have accomplished the analysis and got all of the ideas from people, sifted through them, and got a bunch of proposals that we’re confident are right,” he said. “…This certainly satisfies the vision that I had and other leaders around here had. These are huge changes.”