'Camp Mud' finally gets a facelift 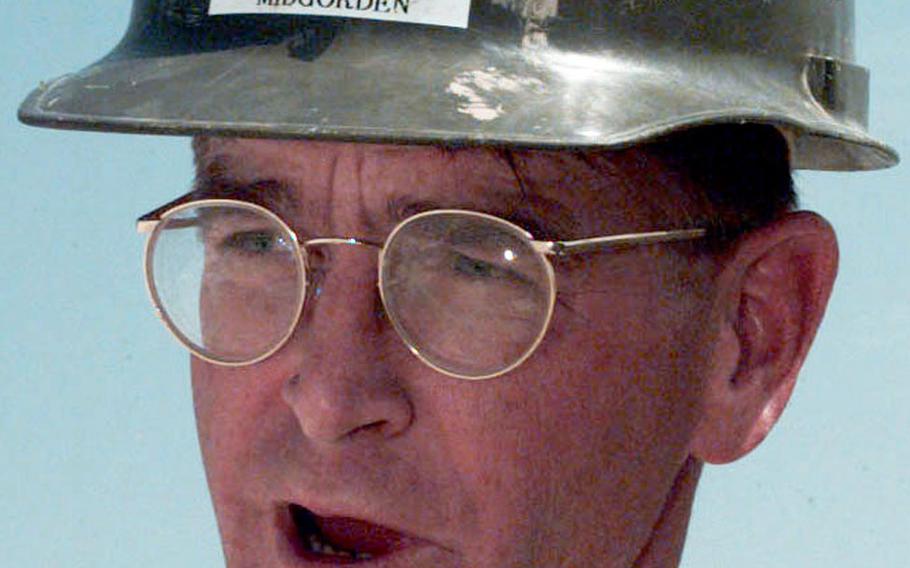 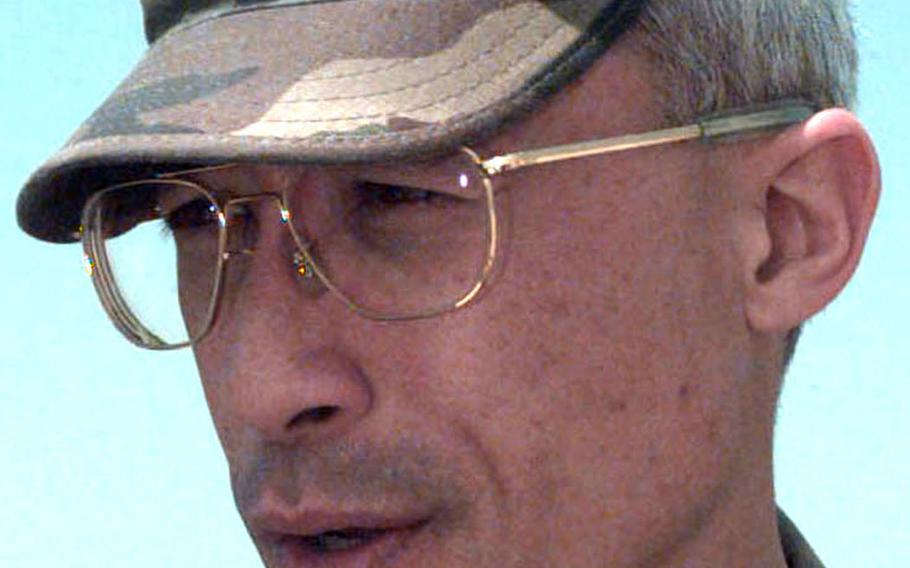 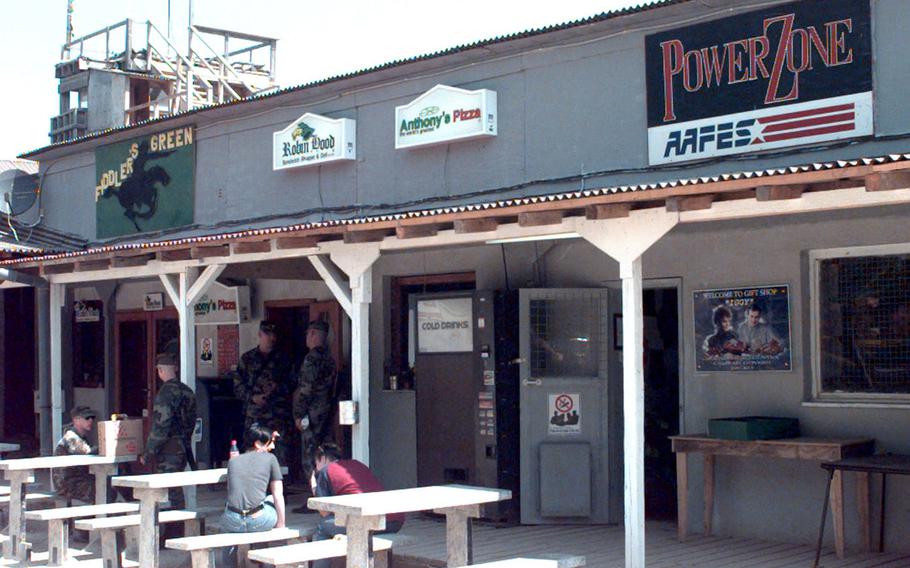 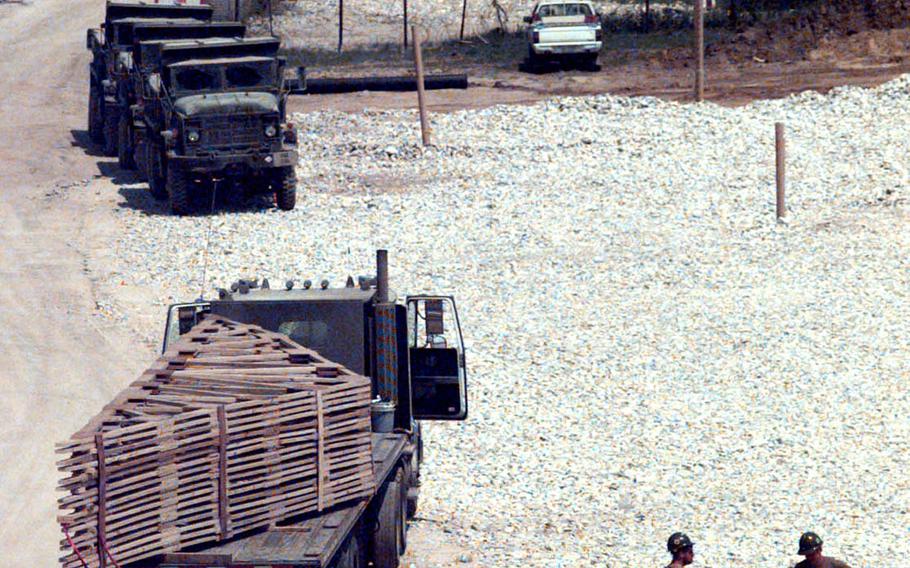 Two members of the Naval Mobile Construction Battalion 133 shovel dirt into a wheelbarrow at Camp McGovern. The newly-placed rock that they are standing on is 18 inches deep, in order to support new SEA (Southeast Asia) huts. In the background, Humvees enter the camp's north gate. (Ron Alvey/Stars and Stripes) 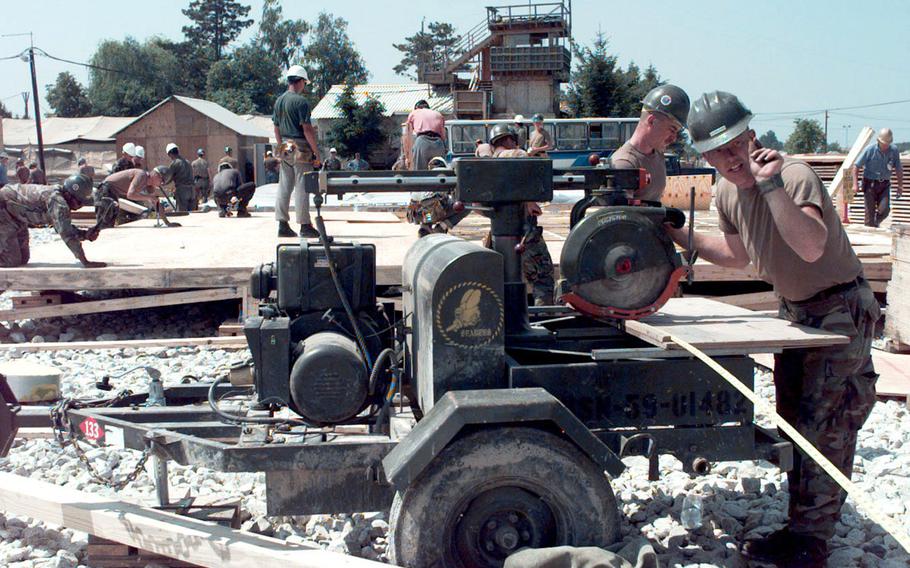 Builder Constructionman Terry Hoyt of Naval Mobile Construction Battalion 133, right, motions to a co-worker that he needs to cut just a bit more lumber during the construction of SEA huts on Camp McGovern (Ron Alvey/Stars and Stripes) 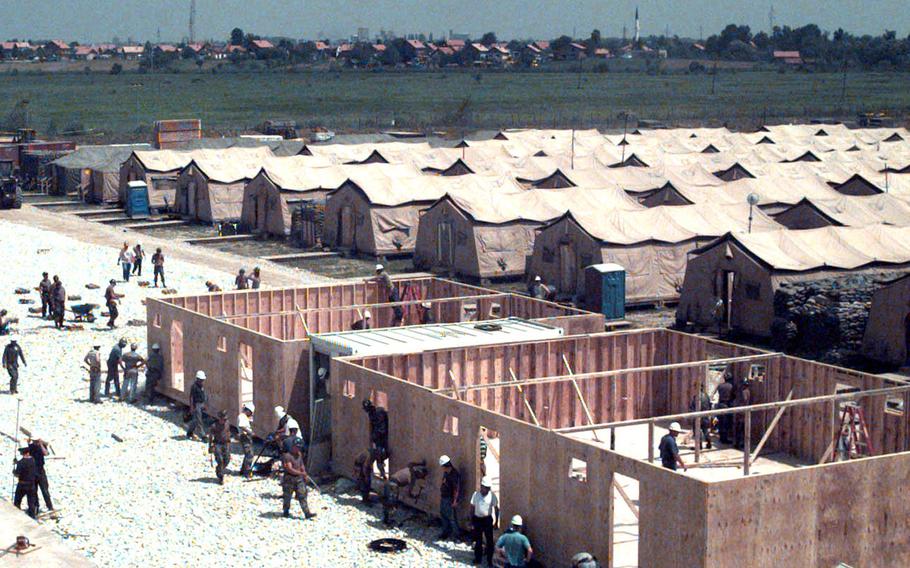 Members of Naval Mobile Construction Battalion 133 and Brown & Root workers construct SEA huts at Camp McGovern in May, 1998. The huts, which are to replace the tents in the background, feature linoleum floors and heating/air conditioning units. In the distance is part of the city of Brcko. (Ron Alvey/Stars and Stripes)

CAMP McGOVERN, Bosnia and Herzegovina — Better living conditions are taking shape as "Camp Mud" grows to fill a starring role as the sole U.S. base in the war-scarred Brcko region.

Standing on sandbags atop a guard tower, Lt. Col. Mark Corda surveyed the construction of eight plywood barracks on the ground below.

"We're balancing the needs of the mission, which may cause us to leave in a relatively short period of time, with the needs of the men," said Corda, commander of the 3rd Squadron, 2nd Armored Cavalry Regiment.

The guard tower, which once stood on the edge of camp, now rises near its center. The camp perimeter, dotted with bunkers, has crept outward to allow for the construction of the modified SEA huts being built by the Navy's 133rd Mobile Construction Battalion and Bosnian workers employed by government contractor Brown & Root.

The expansion of Camp McGovern on the outskirts of Brcko signals the pending closure of nearby Camp Colt, Stabilization Force spokesman Lt. Col. Jim Cronin said at the coalition press information center at Eagle Base near Tuzla.

During the summer and fall, the new barracks will house troops moving through McGovern as they arrive at and depart from peace duty in Bosnia.

In the fall, the barracks will be home to the only U.S. troops in the Brcko region, Cronin said. McGovern, currently home to 800 troops, will have room for 1,200 this fall, he said.

Camp Colt, 20 miles northwest of Me Govern, will be the first U.S. base to close since NATO's Implementation Force became the Stabilization Force 18 months ago.

The decision to close Colt was made based on studies and assessments started after President Clinton announced that American troops would remain in Bosnia past the earlier congressional deadline of June, Cronin said. The Army has decided it needs 900 fewer troops to do the job. That means the American force in the Balkans will shrink from 7,800 to 6,900 As part of that reduction, Camp Colt will close by October.

In the past, squadrons or battalions serving in the U.S-led Multinational Division-North sector have been split between Camps Colt and McGovern. Both are currently home to the 3rd Squadron, 2nd Armored Cavalry Regiment from Fort Polk, La, When the squadron rolls out of Colt and back to the States, the base camp near the Sava River will close.

Having the U.S. battalion near Brcko at one camp will eliminate the cost of powering and feeding a base, Cronin said, and will result in the consolidation of military operations and firepower.

The first eight buildings, which will house up to 400 troops, will cost the Army $450,000 to build, Cronin said. Eventually, the Army plans to replace all of its tents in Bosnia with the modified SEA huts.

Each of the buildings, complete with air conditioning and electric heat, can house up to 50 troops, Corda said. This, the first round of construction, is due to be complete June 15. All of McGovern's green tents will be replaced with the plywood buildings, Corda said.

Though intertwined with the issue of Colt's closure, the decision to move from tents to sea huts was driven by quality-of- life concerns, Corda said. The tents, intended for temporary use, had been standing since the U.S. Army rolled into Bosnia in January 1996. On top of their normal drawbacks, the tents had started to decay.

"If the wind blows, the side shakes, and when it rains you get a little bit of water trickling in," Corda said. "You have no relief from the heat but to roll up the sides. The task force had to make a decision, either to replace the tents with tents, go with Conexes or with these structures."

A Conex, short for Container Express, is a boxy portable living unit that can be hauled on a truck trailer.

"The commanding general made the decision to go with these structures," Corda said. "We could have gone two to three people per Conex. But he was thinking in terms of the combat team, squad integrity, platoon integrity, company integrity. And that's what we have right here. I've got guys 12 to a tent because they want to stay together."

The tents that are being removed to make room for the sea huts were pulled from the mud, according to Petty Officer1st Class David Midgorden, one of 33 Seabees working alongside 45 Brown & Root employees at the site Wednesday.

"This used to be called Camp Mud. Now I guess they'll call it Camp Rock," Midgorden said as he looked at the sea of white limestone rock covering the McGovern construction site. The rock, which comes from a Bosnian quarry, will improve drainage around the barracks.

"This is a modification of the old Navy SEA huts that have been around since World War II," said Midgorden.

Actually, it's five of them nailed together.

Each building will replace three tents, Midgorden said. The plywood structures are insulated. Every two buildings are joined in the middle by a shower that troops can reach by walking under a covered, 6-foot-wide, wooden walkway. Previously, some soldiers had to walk from the edge of camp to showers at McGovern's center.

The life expectancy of a SEA hut is five to eight years. With the rock added underneath, they could last longer, said Seabee Chief Petty Officer Tony Williams.

New barracks are not the only improvements.

Over the past 10 months, McGovern has grown more soldier-friendly. A barrier prevents vehicles from rolling into living areas. Awnings shield standing troops from dust and rain.

The work to improve the camp will benefit McGovern's new residents arriving during the summer and fall, the squadron commander said. And though the buildup may make soldiers' lives more comfortable, everything could disappear rapidly if troops are pulled out — just like at Camp Colt.

"We're not building buildings," Corda said. "There's no mortar and brick here. Even though this may look more permanent than the tents, it's still temporary We are set to stay as long as we need to, but everything we're putting up can be taken down easily"