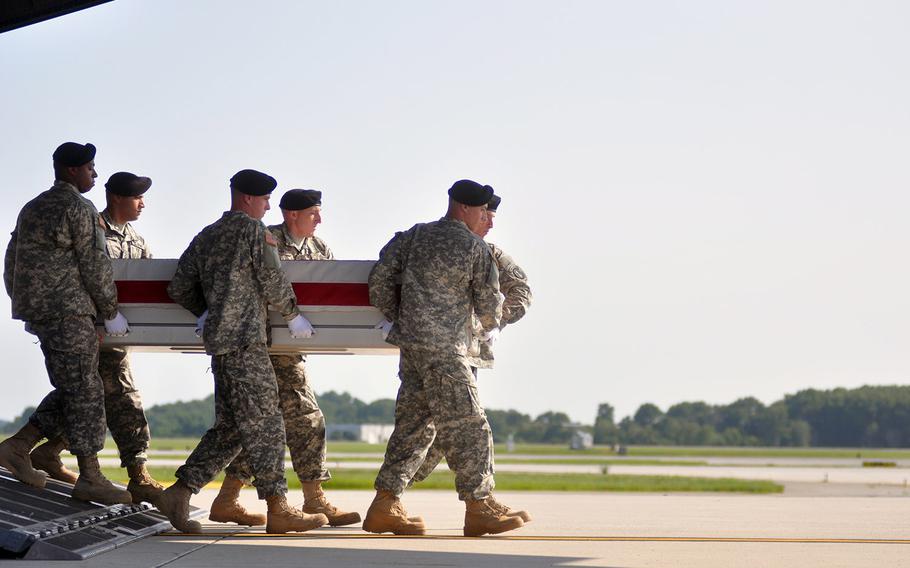 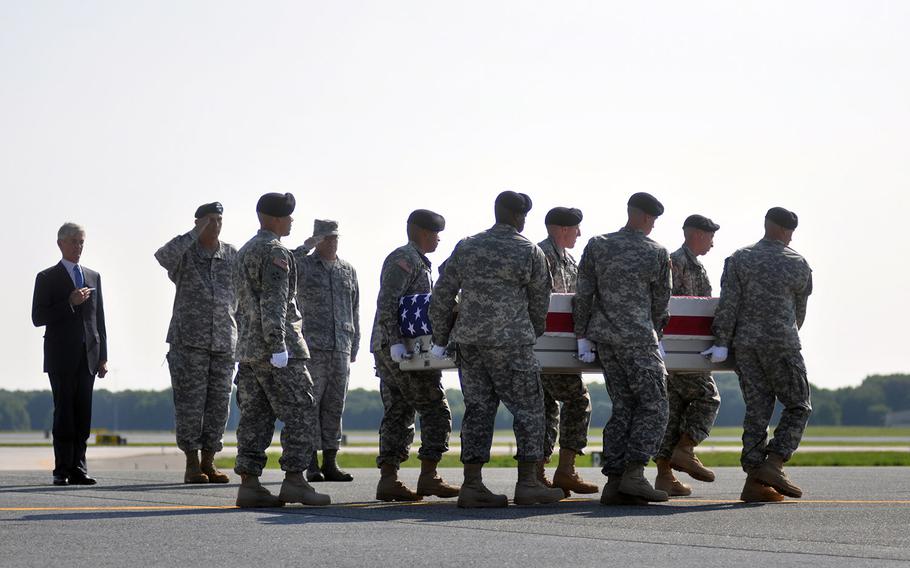 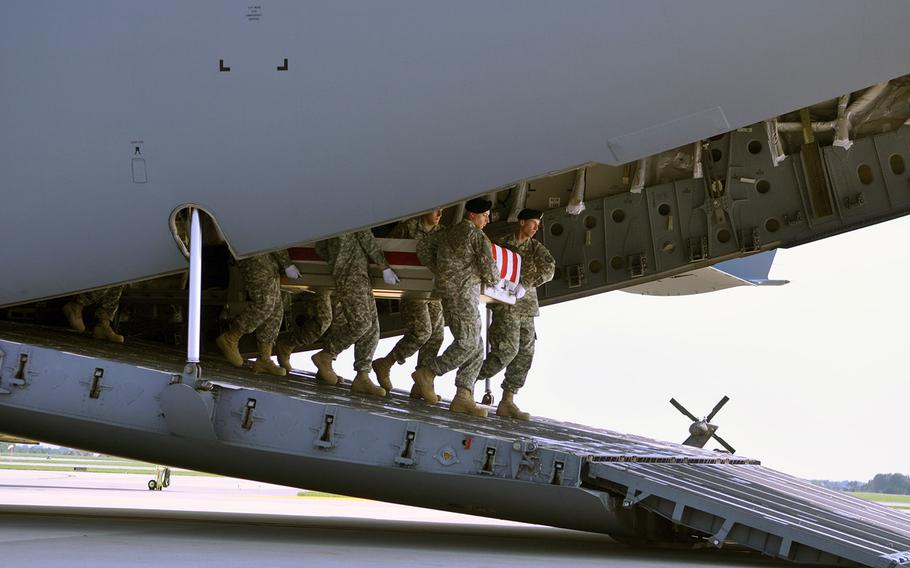 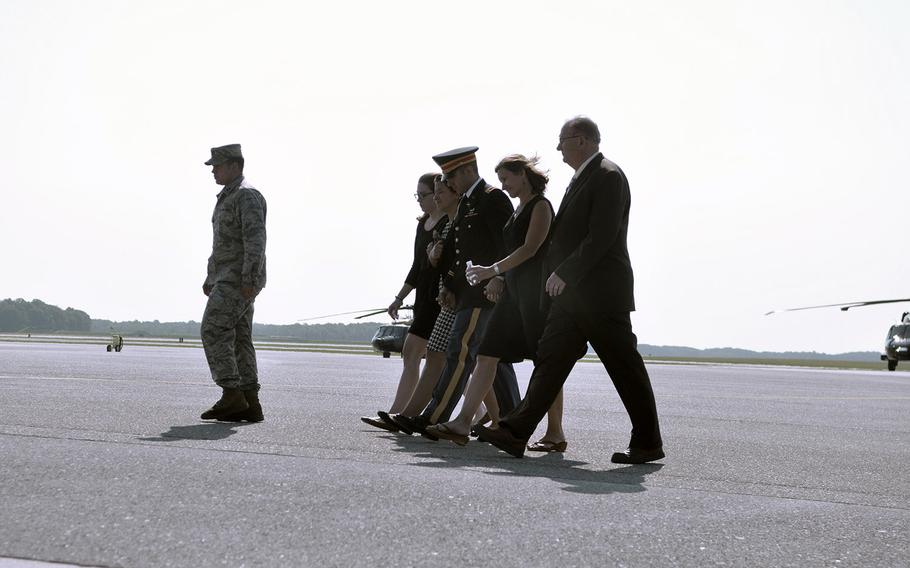 DOVER AIR FORCE BASE, Del. — The body of Maj. Gen. Harold J. Greene, the first general officer killed in foreign hostilities since 1970, arrived at Dover Air Force Base on Thursday from Afghanistan.

Six soldiers slowly carried a transfer case with his remains past Army Secretary John McHugh and Army Chief of Staff Ray Odierno and placed it in a truck that carried it to the Air Force-run mortuary on the base.

The movement was carried out in the customary silence, but afterward, soft sobs could be heard as members of the general’s immediate family boarded the aircraft to thank the crew for taking care of Greene on his final flight.

It is unclear what led the shooter, identified as a man in his 20s, to hide Tuesday in a bathroom at the military training base near the capital, then emerge and open fire on a delegation of visiting American and European military officers, before being shot dead himself.

Greene’s death was the latest in what is a persistent problem endemic to Westerners training Afghan recruits: insider attacks.

Attacks by Afghan forces on their coalition partners — the Long Wars Journal has counted 87 since 2008 — reached a peak in 2012. That’s when the U.S. military imposed security and education measures intended to protect coalition troops from the very people they are supposed to help. Until Tuesday’s attack, those measures were thought to have been successful; it had been six months since a uniformed Afghan had attacked American soldiers.

But Tuesday’s attack raised questions about whether the respite was because of the increased security measures or whether it was just the benefit of the drop in U.S. interactions with Afghan soldiers occasioned by the draw-down of American troops.

A German brigadier general and a senior Afghan commander also were among the wounded, as were 15 other Western troopers.

The German officer has been identified as 56-year-old Brig. Gen. Michael Bartscher, adviser to the so-called Ministerial Advisory Group, which advises the Afghan defense ministry. He was taken to the German field hospital at Mazar-e-Sharif on Wednesday. His condition remains stable. A decision about transporting him to Germany will be made in the next few days, according to German army officials.

Of the 15 wounded, eight were American.

Six of the Americans were flown to Ramstein Air Base in Germany on Thursday morning and transferred to Landstuhl Regional Medical Center. All were in stable condition Friday morning, said Landstuhl spokesman Chuck Roberts. Five were treated for gunshot wounds and the sixth for shrapnel, he said. He did not know the status or whereabouts of the other two.

Echoing the statements made by U.S. officials in recent days, Ambassador Maurits Jochems, the Dutch diplomat who is NATO’s senior civilian representative in Afghanistan, said that although the investigation is still ongoing, he doesn’t expect the attack to have a lasting impact on the coalition’s operations.

“The number of insider attacks over the past year or so has diminished quite significantly,” he told reporters in Kabul on Wednesday. If anything, Jochems said, he expects it to strengthen the resolve of international troops to honor the sacrifice by Greene and others.

With the overall number of insider attacks — and American casualties in general — much lower than in previous years, Greene’s death is unlikely to make much of a difference to an American public already soured on Afghanistan, said Anthony Cordesman, with the Center for Strategic and International Studies.

“Particularly in the United States, a general will get more attention, but Americans won’t be any more disturbed by the war,” he said. “It reminds them that the war exists, but it doesn’t impact how the war is viewed.”

He said the shooting should be viewed in the context of a sustained, and even growing, level of overall violence in Afghanistan, rather than as any harbinger of an increase in insider attacks.

“The problem is not so much green-on-blue, but rather the overall major increase in high-profile attacks,” Cordesman said. “It indicates a greater insurgent presence in more areas. It shows that this war isn’t transitioning into peace. It’s a very serious conflict that is still going on.”

Stars and Stripes reporters Josh Smith and Jon Harper and the McClatchy news service contributed to this report.