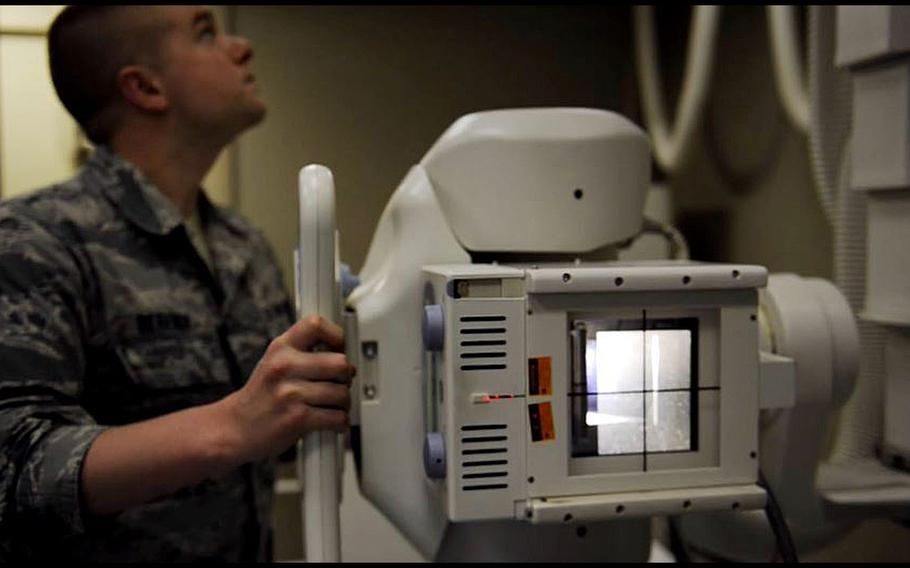 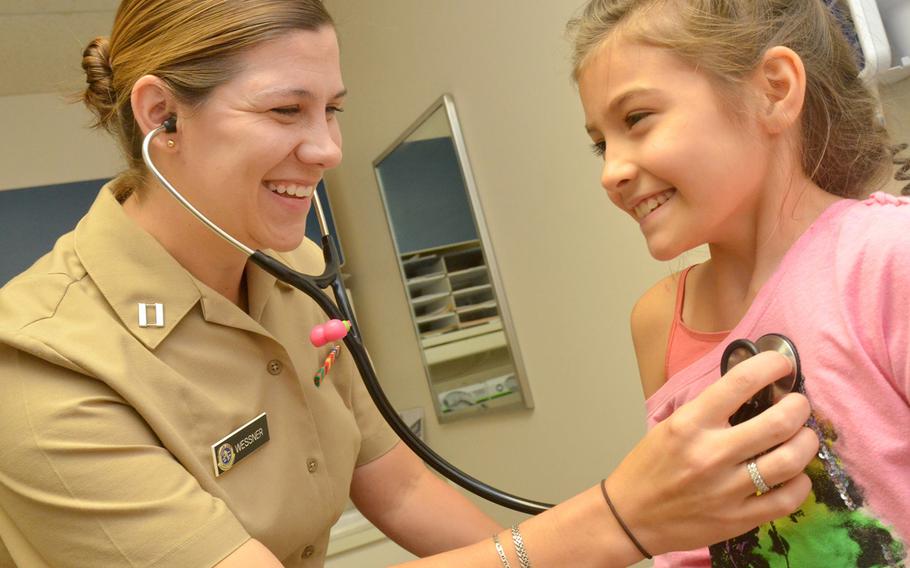 Lt. Allison Wessner, a pediatrician at Naval Hospital Jacksonville, conducts a check-up on a young patient on Aug. 3, 2017. The Defense Health Agency says it has embraced and begun to adopt a host of recommendations to improve health care services for military children. (Jacob Sippel/U.S. Navy) 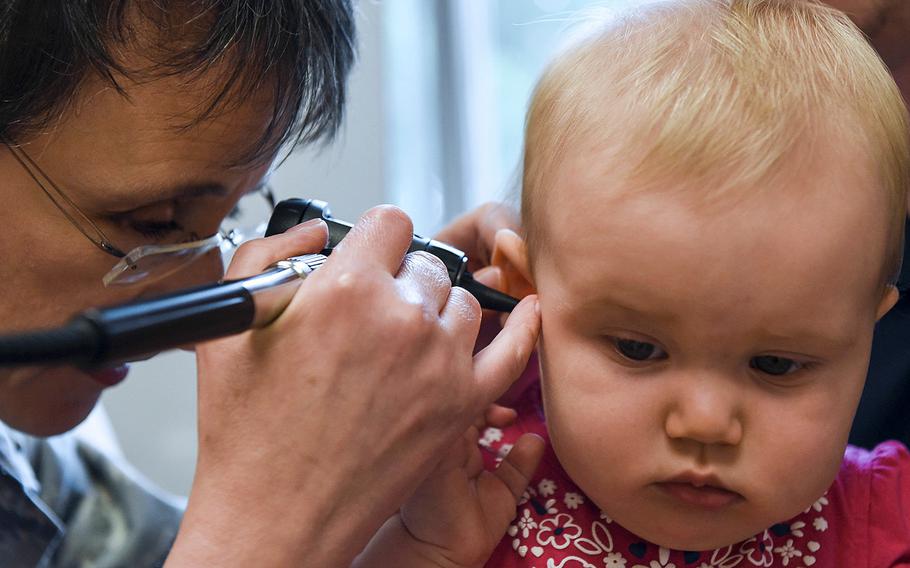 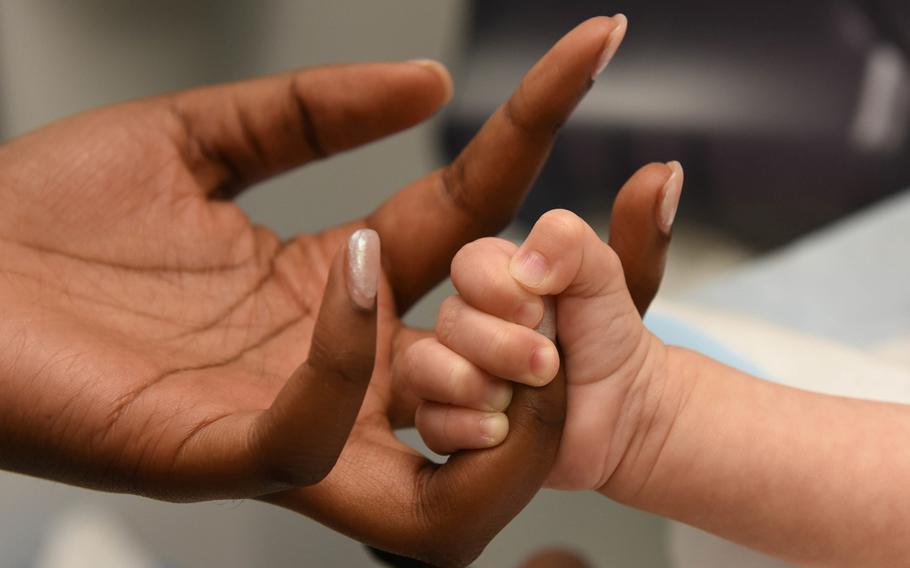 The Defense Health Agency says it has embraced and begun to adopt a host of recommendations to improve health care services for military children.

The recommendations come from independent medical experts on the Defense Health Board (DHB), a federal advisory panel serving the Secretary of Defense. Most recently it spent almost two years studying how effectively health care is delivered and tracked for 2.7 million children of America’s armed forces.

The board found weaknesses: inconsistent and incomplete data collection on pediatric services; unused tools to track patient satisfaction; uneven access to medical and behavioral care based on family assignment; difficulty coordinating care for complex pediatric medical needs across a complex health system, and a need for that system to show greater flexibility as it continues to apply Medicare guidelines to the delivery of health benefits for children.

Jeremy Hilton, a military spouse, father of a special needs child and longtime advocate for improving quality of pediatric services, praised the 204-page Pediatric Health Care Services report, as delivered to the Defense Health Agency in draft form in August. It is expected to be released as a final report in October.

Hilton lauded the caliber of board members, which included a former chairman of the Joint Chiefs and past presidents of the American Medical Association, and the scope of its findings, which detail, he said, “dramatic improvements needed in provision of healthcare for military children.”

Navy Capt. Edward Simmer, chief clinical officer for TRICARE Health Plans for the Defense Health Agency, said Tuesday that DHA welcomes the report and is implementing its suggestions “as quickly as we can. Some of these things we can accomplish within a matter of a few weeks or few months. Some will take longer.”

He categorized them as falling across “four broad areas” of effort to improve pediatric care. Many initiatives, he added, “we were already working on” but the board “helped us focus some of those efforts and pointed out some things that perhaps we didn’t see before.”

As a result, DHA is taking actions to: improve both the coordination and standardization of care provided to children across the entire military health system; improve communication among providers of pediatric care both in the military direct care system and across purchased care networks of civilian providers; improve data collection to record and measure outcomes of pediatric care accurately, and make health care benefits for children more flexible.

The report is “loud and clear” on the need for the DHA and the Army, Navy and Air Force medical departments to do better job collecting and analyzing pediatric health care data to improve benefits for children, Simmer said.

On flexibility, the report notes that TRICARE payment and reimbursement policies follow Medicare guidelines, which “make it difficult for TRICARE to adapt to the nuances of pediatric care.” For example, if a family with a terminally ill child seeks hospice care, under Medicare guidelines they lose eligibility for other types of care that could improve quality of life or even extend the life of the child.

“It doesn’t make sense to make hospice policy for pediatrics off the needs of a 90-year old,” said Hilton. “It’s a different world. Kids recover at a different rate and have a different set of needs than my grandmother does.”

Simmer tied the need for greater flexibility to advances in care. Both at military facilities and across TRICARE networks, Simmer said, there must be “processes to identify the latest evidence-based care and to make sure it’s available for our kids.”

Defense officials requested the Defense Health Board review after a study of nationwide immunization data, published in Pediatrics magazine in April 2015, found military kids had fallen behind the rest of the nation’s in receiving immunizations recommended by the Centers for Disease Control and Prevention.

The board expanded its review in July 2016 from clinical preventive services alone to all opportunities to improve care for military children. In its first year of study, the board confirmed health data tracking by Army, Navy and Air Force medical departments was unreliable for determining how the military stacks up against other health plans in immunization and other disease-prevention services for children, said Dr. George K. Anderson. The retired Air Force major general chaired the board’s subcommittee on health care delivery and co-wrote the report.

Because the three departments use different tracking method, and because TRICARE doesn’t require civilian physicians off base to share records with the direct care system, immunization rates for military children remain unknown.

“They’re probably as good as the civilians’ but nobody can prove it,” Anderson said. “We have plenty of anecdotal information” from providers “saying, ‘Yeah, we’ve got good immunization policies. The kids come in and get immunized.’ However, you can’t prove the rates are based on good data.”

“Think about all the other clinical preventive services that kids ought to be receiving” such as well-baby care and hearing tests. There too, he said, standardized data collection doesn’t exist to be sure that, system wide, care is being delivered on time.

“We talked to many pediatricians in the system. They’re actively trying to improve their numbers where they have them, and trying to improve access times and response rates,” said Dr. Jeremy A. Lazarus, a psychiatrist and past president of the American Medical Association. He chaired the board’s neurobehavioral health subcommittee and also co-wrote the report.

“Part of the problem is there is so much variability across the services. And because you’re got the direct-care component as well as purchased care, it’s very hard to get an organized sense of what’s going on within the whole system.” .

The report also confirmed that care access and quality for children can vary widely based on where families are assigned. Getting needed care can be especially difficult for children with mental or behavioral health conditions in rural areas, said Lazarus. The board also heard complaints from families with special needs children of gaps in coverage, for weeks or months, when families are reassigned.

“We don’t have an absolute number about how often the problems occur,” he said, and the system appears committed to minimizing such coverage gaps.

Anderson and Lazarus discussed other highlights from the report including an urgent need to modernize information technology. They said the new electronic health record system, MHS Genesis, which is being launched in stages across the military health care, will be critical to improving pediatric care.

Anderson also stressed that the health system, particularly TRICARE, must operate on the notion that military health care “is a benefit, not an insurance policy.” That should mean more aggressive outreach to ensure children get all the care they need rather be a network waiting to deliver services upon request.