Biden, joined by Obama, Bush and Clinton, will lay a wreath at Arlington after inauguration 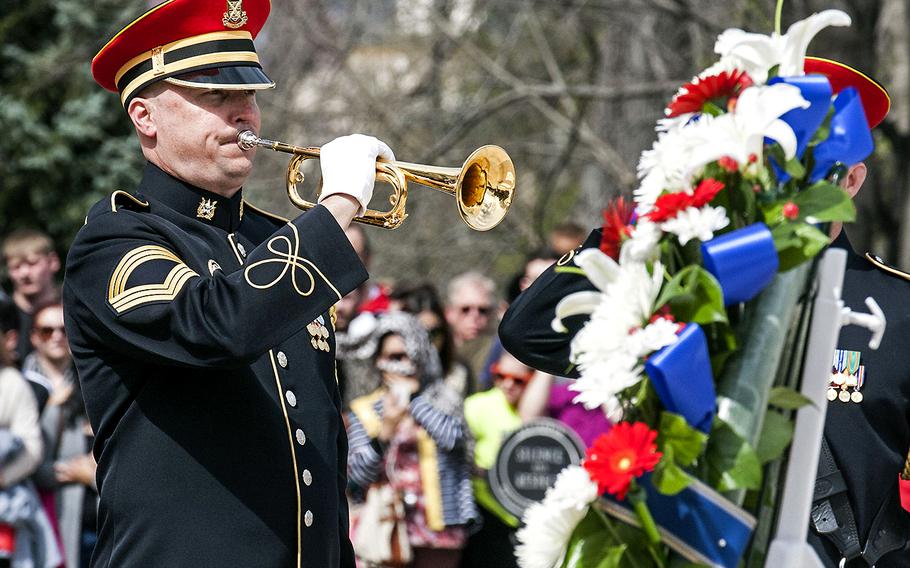 A service member plays taps during a wreath-laying ceremony at the Tomb of the Unknown Soldier in Arlington National Cemetery during Medal of Honor Day, March 25, 2016. (Meredith Tibbetts/Stars and Stripes)

The Presidential Inaugural Committee said Monday that Biden would lay the wreath at the Tomb of the Unknown Soldier – one of his first acts as president – as a way of “honoring our men and women in uniform who paid the ultimate sacrifice in defense of our common values.”

Biden will be joined by his wife, Jill Biden, as well as Vice President-elect Kamala Harris and her husband, Doug Emhoff. Former presidents Barack Obama, George Bush and Bill Clinton, and Michelle Obama, Laura Bush and Hillary Clinton, will also be present at the ceremony.

Absent from the list is President Donald Trump, who said last week he plans to skip Biden’s swearing-in. Trump made the statement Friday, just days after a pro-Trump mob stormed into the U.S. Capitol building.

The Capitol riots, which resulted in five deaths, created concerns over security at Biden’s inauguration. As of Monday, Biden’s swearing-in ceremony was still planned for the west front of the Capitol building.

“America United” is the theme of Biden’s inauguration, the committee announced Monday.

“This inauguration marks a new chapter for the American people – one of healing, unifying, of coming together, of an America united,” said Tony Allen, CEO of the inaugural committee. “It is time to turn the page on this era of division.”

Biden’s swearing-in ceremony will be scaled down from typical inaugurations because of the ongoing coronavirus pandemic. In place of people converging near the U.S. Capitol to watch the events, the inaugural committee plans to display nearly 200,000 American flags across the National Mall. The committee is asking people to sponsor a flag by donating to their choice of six charities.