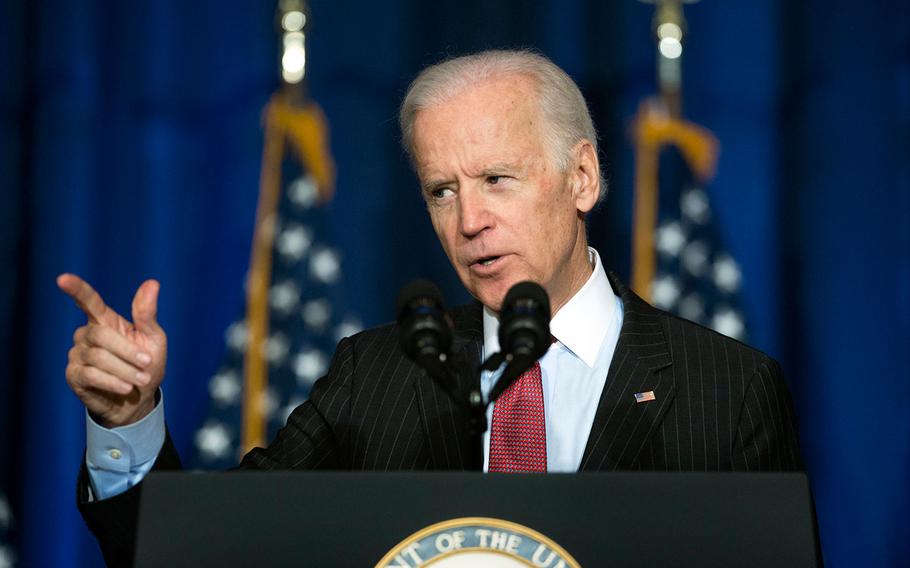 WASHINGTON — Vice President Joe Biden brushed aside concerns of a stalemate in Iraq and said proof is rolling in that the administration strategy is beginning to win against the Islamic State.

The speech laid the groundwork for a visit next week by the prime minister and also comes at a critical moment in the 8-month-old war. Iraqi forces — following new training and months of aerial bombing by the United States — are attempting to reclaim restive Anbar province from the Islamic extremist army and show whether they are capable of running a successful large-scale military offensive.

“The jury is still out [on the war’s ultimate outcome], that is the truth … but the momentum is in the right direction,” Biden said.

The Obama administration strategy relies on an air campaign to pound Islamic State targets and new military training of Iraqi and Kurdish troops. Despite extensive United States training during the last war, the Iraqi army quickly folded when jihadists pushed across the Syrian border a year ago and seized large swaths of the country.

Iraq and Kurdish forces have now managed a series of victories over the Islamic State at the Mosul Dam, Mount Sinjar and Tikrit, Biden said.

“Today in Iraq, ISIL has lost large areas it used to dominate,” he said, using an alternative name for the jihadist army.

But the administration has also underscored the need for a political solution in Iraq, which would require a power-sharing arrangement between ruling Shiites and the Sunni Muslims, who were marginalized by the previous government lead by Nouri al-Maliki.

Biden said al-Abadi, a Shiite, has made major strides toward unification and cleaning up the government, including the mobilization of thousands of Sunni Iraqis to fight against the Islamic State, appointment of a Sunni defense minister, and the ejection of corrupt military leaders.

Meanwhile, the government in Baghdad passed a national budget with equitable revenue sharing in record time and struck a deal on dispersing oil profits, he said.

Concerns that Iraq would split along sectarian Sunni-Shiite lines or become dominated by neighboring Iran amid the grip of war “do not reflect the circumstances on the ground,” he said.

But the unfolding battle for Anbar may be a defining fight for the Iraqis — and a key test of the newfound Shiite-Sunni unity touted by the White House.

The region is populated by Sunni tribes and the Islamic State now controls six of eight districts there, the Institute for the Study of War reported this week. A decade ago, American forces encountered an al-Qaida linked insurgency in Anbar that lead to bloody fighting in Ramadi and Fallujah, and a group of Sunni tribes stood up to assist the U.S.

Now, al-Abadi and the U.S. must count on those same Sunnis to take up arms against the jihadists occupying the region and push them out, a strategy that so far has not been tested on such a large scale.

“In other provinces, anti-ISIS Iraqi Sunni tribes have mostly played a minor role in operations to recapture territories from ISIS and other insurgent groups,” the Institute reported. “In contrast, the strong tribal nature of Anbar as well as the history of the province as the birthplace of the anti-al-Qaida in Iraq ‘awakening’ in 2005 will likely provide for a larger tribal role in the upcoming operations.”