Biden: 9/11 attacks no longer justify US military presence in Afghanistan 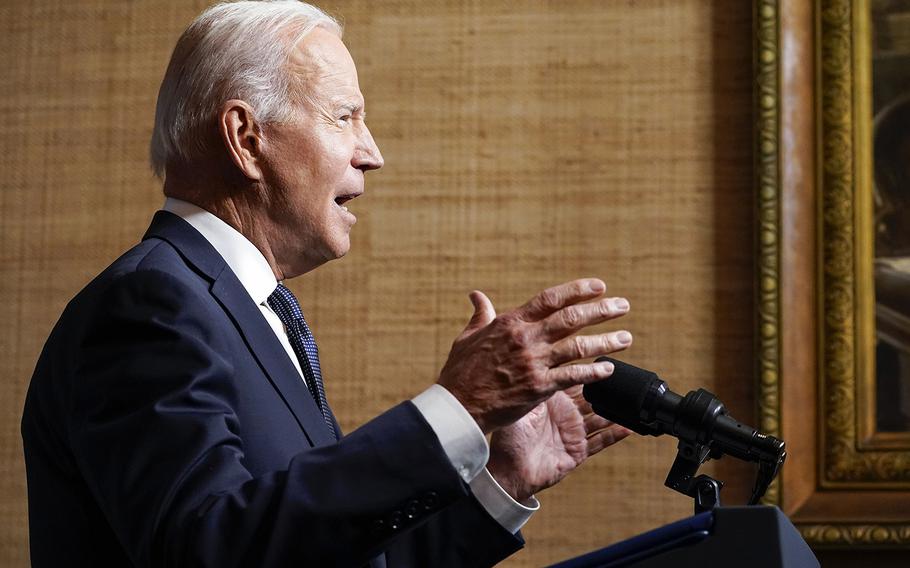 President Joe Biden speaks from the Treaty Room in the White House on Wednesday, April 14, 2021, about the withdrawal of the remainder of U.S. troops from Afghanistan. (Andrew Harnik, pool/AP)

President Joe Biden speaks from the Treaty Room in the White House on Wednesday, April 14, 2021, about the withdrawal of the remainder of U.S. troops from Afghanistan. (Andrew Harnik, pool/AP) 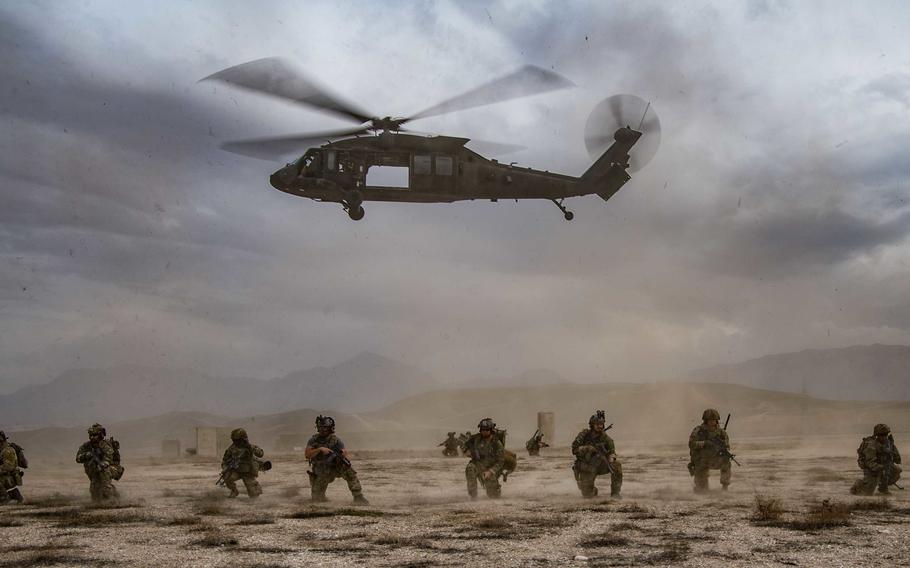 U.S. service members secure the perimeter at an undisclosed location in Afghanistan in March 2020. President Joe Biden formally announced Wednesday, April 14, 2021, that the U.S. will remove the remaining 2,500 or so U.S. troops from Afghanistan by Sept. 11, 2021. (Joel Pfiester/U.S. Air Force)

President Joe Biden on Wednesday said he would end American military involvement in its longest war by the 20th anniversary of the 9/11 terrorist attacks because maintaining troops in Afghanistan would do little to change the conflict in that country.

“We went to Afghanistan because of a horrific attack that happened 20 years ago,” Biden said in the televised speech from the White House Treaty Room. “That cannot explain why we should remain there in 2021.

“It is time for American troops to come home.”

Biden’s speech made formal the announcement that came Tuesday when the White House said he had reached a decision after a three-month review to remove the remaining 2,500 or so U.S. troops from Afghanistan by Sept. 11, 2021. He made his address Wednesday from the very room where on Oct. 7, 2001, President George W. Bush, in stoic address to the nation, announced he had sent American forces into Afghanistan to hunt down the terrorists responsible for the attacks weeks earlier and begun strikes “to disrupt the use of Afghanistan as a terrorist base of operations.”

Critics of Biden’s decision worry if the United States military leaves Afghanistan, the Taliban could quickly rout the Afghan National Defense and Security Forces in key locations and, eventually, return to power in the country. Afghanistan could return to “a breeding ground for international terrorists,” said Sen. Jim Inhofe, R-Okla., the top Republican on the Senate Armed Services Committee,

But Biden said Wednesday that terrorist threats outside Afghanistan — including al-Qaida and Islamic State affiliates in Yemen, Somalia and Syria — now pose a greater threat to U.S. national security than those remaining in that country. Troops could better respond to those and other threats in the Middle East, central Asia and Africa from outside Afghanistan, he said.

In reaching his decision, Biden said the United States had completed its primary goal for entering Afghanistan years ago, when in 2011 it tracked down and killed Osama bin Laden. He said he did not believe perfect conditions for withdrawing U.S. troops and ensuring military victory over the Taliban would ever exist.

“No one wants to say we should be in Afghanistan forever, but they insist now is not that time to leave,” Biden said of critics of his decision. “When will it be the right moment to leave, one more year, two more years, 10 more years? … I’ve not heard any good answers to these questions. If we can’t answer them, in my view, we should not stay.”

Despite the withdrawal, Biden pledged continued “diplomatic and humanitarian” assistance for the Afghan government and continued support to the Afghan military, which he said has continued to “fight valiantly on behalf of their country and defend the Afghan people — at great cost.”

Top military officials as recently as this month have said publicly the Afghan forces still require U.S. troops’ assistance to repel Taliban violence. Biden did not detail Wednesday precisely how the United States would continue supporting Afghan forces, but it would likely include providing military weapons and equipment and drone strikes launched from other locations throughout the region.

Biden, the fourth president to oversee the U.S. wars in Iraq and Afghanistan, said a diplomatic solution was needed to end violence there. He pledged support for peace talks between the U.S.-backed Afghan government in Kabul and the Taliban. The two sides were scheduled to meet for 10 days of talks beginning April 24 in Istanbul, according to the United Nations, though it was unclear Wednesday if the Taliban would participate.

On Wednesday, Taliban spokesman Zabihullah Mujahid reissued an unspecific threat via Twitter to U.S. and NATO forces who remain in Afghanistan beyond May 1 that “problems will certainly be compounded and those whom failed to comply with the agreement will be held liable.”

Under former President Donald Trump, the United States forged an agreement with the Taliban in February 2020 to withdraw all its forces from Afghanistan by May 1 in exchange for assurances from the insurgent group, including its cutting ties with terrorist groups such as al-Qaida and not attacking American and NATO forces. UN and U.S. military officials have said the Taliban have not upheld the agreement and retain ties to terrorists.

Biden issued a warning to the Taliban, insisting that setting a hard date for a full withdrawal would maintain the U.S. commitments reached with the insurgent group under the Trump administration.

“The Taliban should know, if they attack us as we draw down we will defend ourselves and our partners with all the tools at our disposal,” the president said.

While Inhofe and others criticized Biden’s decision to forgo a “conditions-based withdraw” that has been advocated by the military, many welcomed the president’s decision to set a hard date to end military involvement in Afghanistan.

“There are no good options in Afghanistan,” Sen. Jack Reed, D-R.I., chairman of the Senate Armed Services Committee, said in a statement on Tuesday. “President Biden is making a tough call on what may be the least of many bad options.”

Biden, who planned to visit Arlington Cemetery’s Section 60 where war dead from Iraq and Afghanistan are buried on Wednesday, noted 2,488 U.S. troops have been killed in action in Afghanistan since 2001 and another 20,722 have been wounded in combat there.

He said it is now time to focus the military and the country on other challenges in an increasingly unstable world, including checking China’s growing military capabilities and ensuring an end to the coronavirus pandemic.

“The war in Afghanistan was never meant to be a multigenerational undertaking,” Biden said. “We were attacked. We went to war with clear goals. We achieved those objectives. Bin Laden is dead, and al-Qaida is degraded in Iraq and Afghanistan.