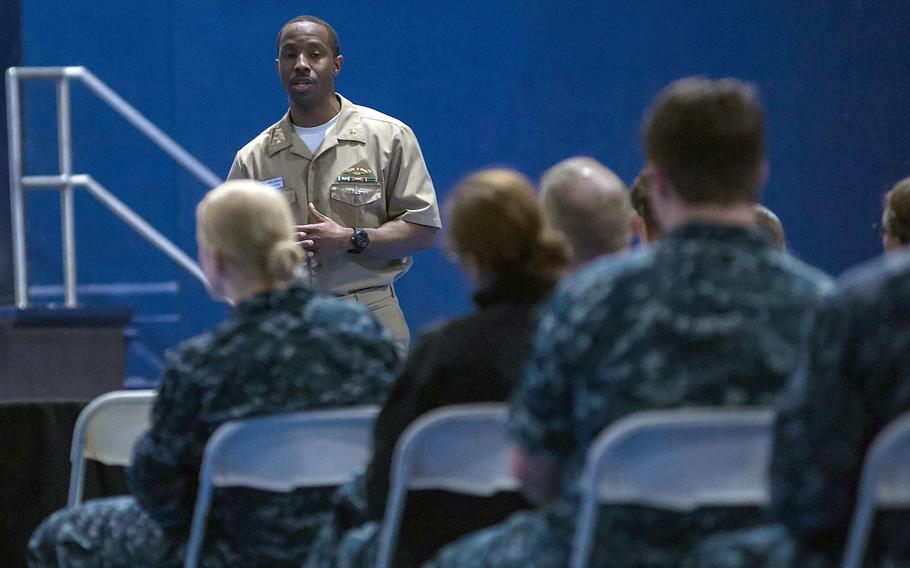 Lt. Cmdr. James Drumgole speaks to female sailors who are interested in converting to the submarine community. (Seth Coulter/U.S. Navy)

Two women sailors currently serving in Bahrain are heading out on a deep-sea journey where no female enlisted servicemembers have gone before.

The Navy sought out enlisted applicants for submarine duty earlier this year. Morse and Underwood both jumped at the opportunity.

Morse, 36, joined the Navy in 2012 expressly so she could serve on a submarine. The New Hampshire native, who been struggling to find consistent work, came across an article about plans to open up submarines to female sailors. “I just read it and thought, ‘That’s something different,’ ” she said. “ ‘I can try that.’ ”

Morse found out in June she had been accepted.

“I was just excited and almost speechless,” she said.

Underwood, 24, from Brunswick, Ga., began considering the submarine program about a year ago, after she attended an all-hands call with the chief of Naval Personnel. “I was like, ‘Man, when they open that up, I’m going for it,’ ” she said.

Underwood has been to 16 countries during her six years of service. “I knocked out a lot of the stuff I wanted to do by the age of 24. Submarines are a new platform. It’s a new experience, something different.”

The sailors are currently completing online training modules and talking to submarine sailors to become more familiar with their new platform. Before getting to the Michigan, they’ll head to Basic Enlisted Submarine School and their respective apprenticeship schools.

The two sailors believe they need to set the right tone for this exciting step forward for women in the military.

“I think we can do the same thing our male counterparts can do,” Underwood said. “I think it’s great they give us the opportunity to prove ourselves.”

The Navy ended a ban on women serving aboard submarines in 2010, and female officers have served on Ohio-class submarines since late 2011. Earlier this year, female officers reported for the first time to smaller, Virginia-class fast-attack subs.

As the Navy was assessing how quickly to integrate the enlisted crews last spring, it issued a survey to more than 50,000 enlisted female sailors that found significant but not overwhelming interest in submarine duty. Of the 12,700 sailors who participated, 28.5 percent indicated they would be open to volunteering for submarine service, according to Lt. Cmdr. Tommy Crosby, a Virginia-based spokesman for the submarine force.

The women face eight weeks of training at Basic Enlisted Submarine School. The female sailors, who are in the Submarine Electronics Communications Field training pipeline, will then receive 18 weeks of specialized training in submarine electronics.

The commander of the Naval Submarine School, Capt. Andrew Jarrett, told The Associated Press that the women will have the same opportunities as their male counterparts.