Austin is sworn in as defense secretary, attends briefings on coronavirus pandemic, other operations 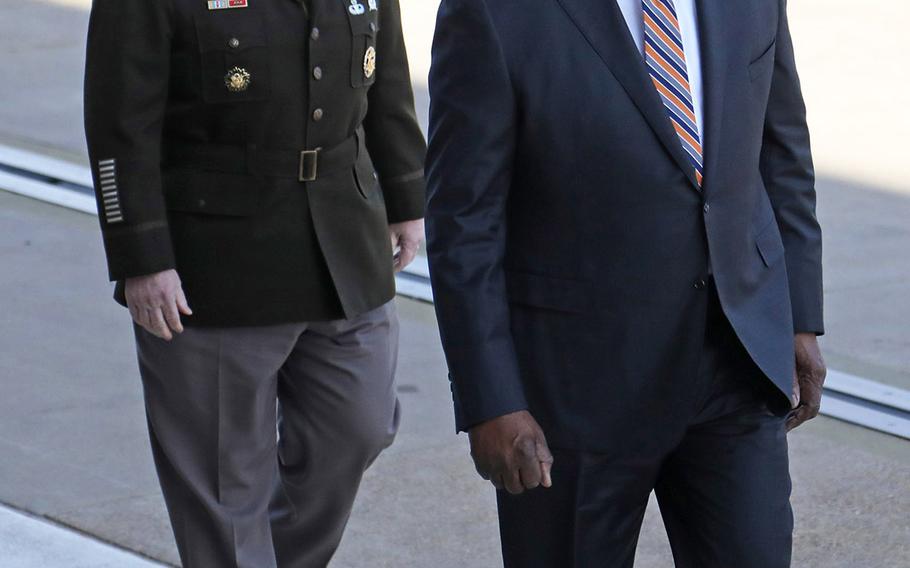 Defense Secretary Lloyd Austin walks up to the Pentagon accompanied by Army Gen. Mark Milley, chairman of the Joint Chiefs of Staff, shortly after being confirmed by the Senate Jan. 22, 2021. He was sworn in as the 28th defense secretary shortly afterward.(Photo by ) (Caitlin M. Kenney/Stars and Stripes)

Defense Secretary Lloyd Austin walks up to the Pentagon accompanied by Army Gen. Mark Milley, chairman of the Joint Chiefs of Staff, shortly after being confirmed by the Senate Jan. 22, 2021. He was sworn in as the 28th defense secretary shortly afterward.(Photo by ) (Caitlin M. Kenney/Stars and Stripes) 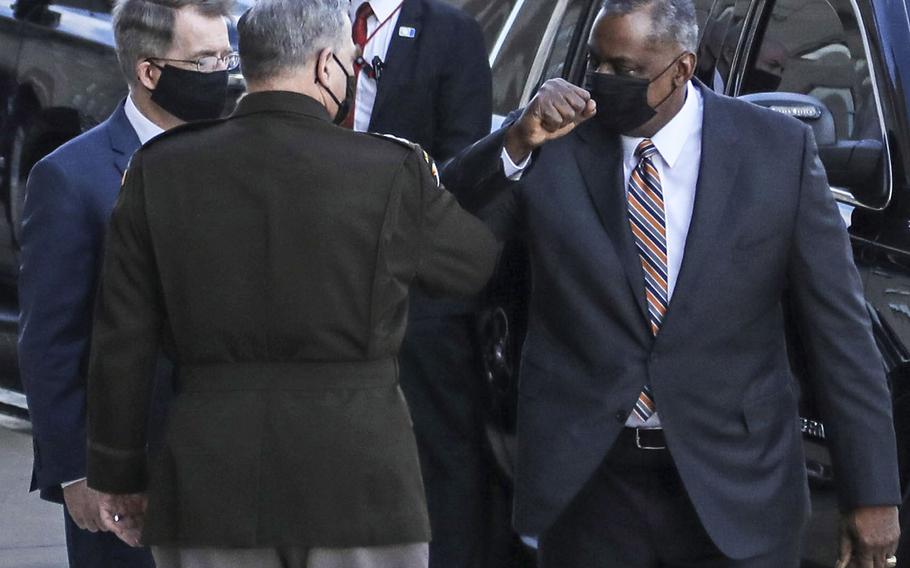 Defense Secretary Lloyd Austin gives an elbow bump to Army Gen. Mark Milley, chairman of the Joint Chiefs of Staff, upon his arrival at the Pentagon Jan. 22, 2021. With then is Acting Defense Secretary David Norquist. Austin was sworn in as the 28th defense secretary shortly afterward. (Caitlin M. Kenney/Stars and Stripes) 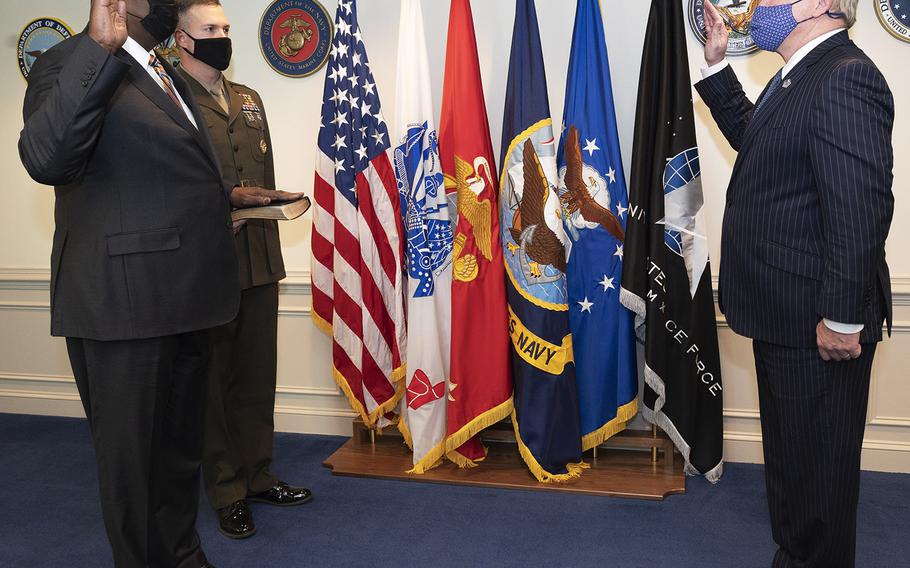 WASHINGTON — Retired Army Gen. Lloyd Austin was confirmed Friday by the Senate to be the 28th defense secretary and the first Black man to hold the position.

The Senate voted 93 to 2 to approve Austin's nomination to the job. Sens. Mike Lee, R-Utah and Josh Hawley, R-Mo. voted against him.

“Secretary Austin is a trailblazer who has once again made history. His ability, integrity, and dynamic leadership earned him a place atop the Pentagon hierarchy. At every step of his career, he’s been a team builder and someone who focuses on the mission, leads by example, and gets the job done,” Sen. Jack Reed, D-R.I., said in a statement. Reed is the top Democrat on the Senate Armed Services Committee.

Reed’s Republican counterpart on the committee, Sen. Jim Inhofe of Oklahoma, said he looks forward to working with Austin to support the Defense Department.

“Today’s vote to confirm Austin as secretary of defense sends a strong signal to all Americans, to our allies and partners, and, most significantly, to our potential adversaries that Congress is committed to strengthening national security,” Inhofe said. “We’ve got real work to do to make sure our military is properly resourced, trained, and equipped after doing too much with too little for too long.”

Austin arrived at the Pentagon just after noon and was greeted by David Norquist, who has been serving as acting defense secretary since Wednesday, and Army Gen. Mark Milley, the chairman of the Joint Chiefs of Staff.

“Hello everybody. Good to see you guys. Thanks for being here. Look forward to working with you. See you around campus,” Austin said to reporters gathered at the Pentagon for his arrival.

He then went into the Pentagon to be sworn in by Tom Muir, the acting director of Washington Headquarters Services, according to the Pentagon.

Austin's confirmation process started Tuesday with his Senate nomination hearing. On Thursday, the House and Senate voted to approve a waiver that Austin needed to override a law that mandates ex-military officers spend seven years out of uniform before leading the Pentagon. Austin retired as a four-star general in 2016.

Austin is the third person to be granted the waiver of the 1947 law, which was intended to ensure civilian control of the military. George Marshall, a former five-star Army general was the first. He received it in 1950 to serve as defense secretary for former President Harry Truman during the Korean War. The second was for former President Donald Trump’s first defense secretary, retired Marine Gen. Jim Mattis in 2017.

Some lawmakers, including Democrats, were concerned about approving another waiver, which is seen as a rare exemption, so quickly after granting one to Mattis. Sen. Chris Van Hollen, D-Md., said Thursday that while he believes Austin is qualified to be the defense secretary and supports his confirmation, he had to vote against the waiver.

“In order to maintain civilian control of our military, U.S. law requires a cooling-off period prior to allowing a recently retired officer to serve as the secretary of defense. I have long supported this cooling-off period, and have voted previously to uphold it,” he said in a statement.

A 1975 graduate of the U.S. Military Academy at West Point, N.Y., Austin commanded infantry units from platoons up and led soldiers in combat in Iraq and Afghanistan. He was the first Black commander of an Army division and corps in combat. He retired after leading U.S. Central Command in war efforts in Afghanistan, Iraq and Syria.

Austin takes over the Pentagon while it faces numerous challenges. In recent weeks, the military completed withdrawals in combat zones that left Biden’s administration with 2,500 troops in Afghanistan, 2,500 in Iraq and few, if any, in Somalia.

He told senators Tuesday that his primary concerns included ensuring the military provided a robust deterrent to China, as the United States works to check its growing power in east Asia and ambitions worldwide.

He also vowed to increase military support to the fight against the coronavirus pandemic, telling senators that he believed there was more that the Pentagon could do to support efforts to stop the spread and distribute vaccines.

After his swearing in, Austin was scheduled to receive an intelligence briefing and then meet with Milley and Norquist, who returns to his role as deputy defense secretary.

Austin is also scheduled to lead a briefing on the coronavirus pandemic, speak with NATO Secretary General Jens Stoltenberg, and receive operational briefings about China and the Middle East, according to the Pentagon.

In a letter issued Friday to the entire force, Austin wrote he is focused on helping the country get the pandemic under control and getting personnel vaccinated.

“You have already come to the aid of our nation's health care professionals. You can expect that mission to continue. But we must help the federal government move further and faster to eradicate the devastating effects of the coronavirus,” he wrote.

He also stated his role is to make everyone in the Defense Department more effective at doing their jobs.

“That means ensuring you have the tools, technology, weapons, and training to deter and defeat our enemies. It means establishing sound policy and strategy and assigning you clear missions. It means putting a premium on cooperation with our allies and partners. And it means living up to our core values, the same ones our fellow citizens expect of us,” he wrote.

Austin on Tuesday committed to ensuring civilian experts were thoroughly involved in crafting Pentagon policy. He told lawmakers that he did not believe two additional years outside of uniform would change the way he thought about military and national security issues.