As Marine Corps tests viability of women in combat roles, some have already joined the ranks Capt. Megan Selbach-Allen, communications officer for 1st Tank Battalion, does a radio check during Exercise Desert Scimitar at Twentynine Palms, Calif., in April 2015. Selbach-Allen was 1 of the 1st women to be assigned to 3rd Combat Engineer Battalion and to 1st Tank Battalion but said her gender has been a nonissue in both units. (Jennifer Hlad/Stars and Stripes)

Capt. Megan Selbach-Allen, communications officer for 1st Tank Battalion, does a radio check during Exercise Desert Scimitar at Twentynine Palms, Calif., in April 2015. Selbach-Allen was 1 of the 1st women to be assigned to 3rd Combat Engineer Battalion and to 1st Tank Battalion but said her gender has been a nonissue in both units. (Jennifer Hlad/Stars and Stripes) 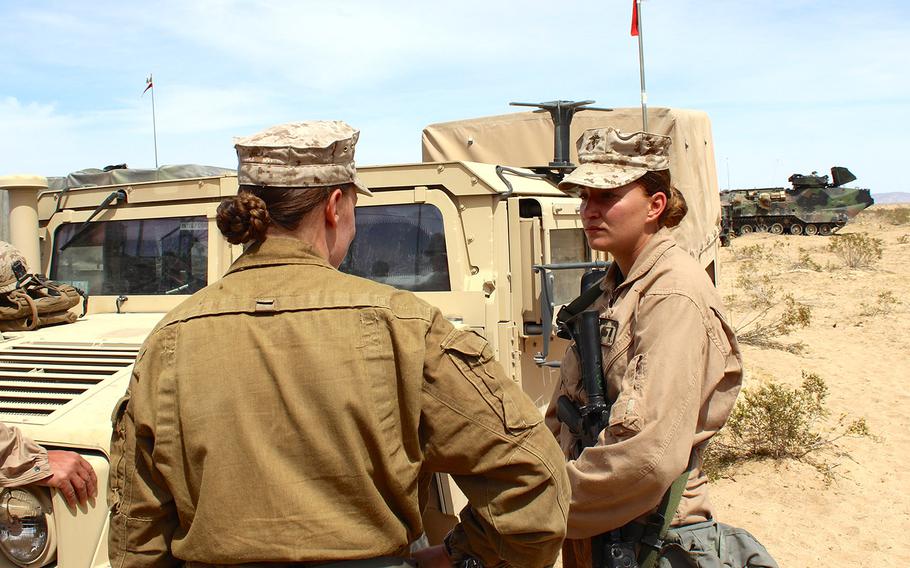 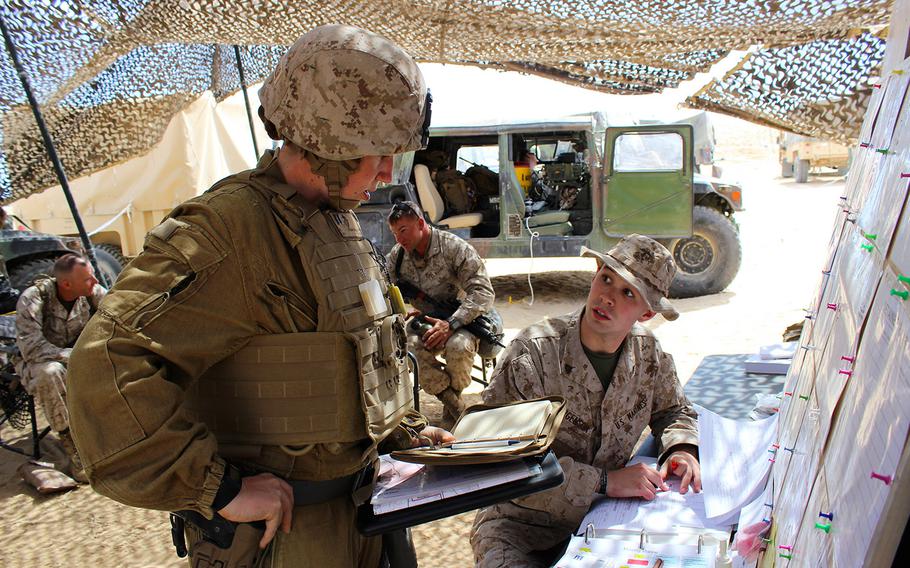 Capt. Megan Selbach-Allen, center, confirms her route with the combat operations center during Exercise Desert Scimitar at Marine Corps Air Ground Combat Center Twentynine Palms, Calif., in April 2015. Selbach-Allen, 1 of 9 women assigned to 1st Tank Battalion, said she loves being a part of 1st Marine Division, which could put her in 'the forward part of the fight.' (Jennifer Hlad/Stars and Stripes)

TWENTYNINE PALMS, Calif. — As the Humvee bumped along in the dust, the communications officer for 1st Tank Battalion picked up the radio handset.

It’s a scene that has played out hundreds, if not thousands, of times in deserts and jungles all over the world. The only difference is that this time, the communications officer for the tank battalion is a woman.

In late 2012, the Marine Corps began assigning women to artillery, tank, combat engineer, combat assault, low altitude air defense and assault amphibious battalions. The move was part of a broader effort to open more combat roles to women, in advance of then-Defense Secretary Leon Panetta’s decision to rescind the policy that barred women from units whose primary mission is to engage in direct ground combat.

Panetta in January 2013 gave the services until January 2016 to allow women to compete for all jobs and units, or to request an exception for positions they believe must remain male-only.

The Marine Corps had begun assessing the performance of female volunteers at its Infantry Officer Course and enlisted infantry training school – with the understanding that even successful graduates would not become infantrywomen. And last year, it created a coed experimental task force to test how women perform as part of a ground combat unit.

Since 2012, 29 women have started the Infantry Officer Course, and only four have made it through the notoriously challenging combat endurance test that kicks off the class.

Three hundred and fifty-eight women volunteered for the enlisted infantry training course, and 122 had graduated from the course by February 2015, when Marine Corps officials determined they had enough data for their studies. The women who graduated were not allowed to become infantry Marines.

The Marine Corps has denied Stars and Stripes access to and interviews with members of the experimental task force, known as the Ground Combat Element Integrated Task Force. Officials said only a handful of the 120 women who started out in the task force in the fall have dropped out, mainly due to injuries.

Even as the Corps conducts these high-profile tests of female volunteers in infantry roles, dozens of other women have been smoothly and quietly integrated into units previously closed to them.

Gender a non-issue In 2012, Capt. Megan Selbach-Allen, now the communications officer for 1st Tanks, became one of the first women ever assigned to 3rd Combat Engineer Battalion.

Though she didn’t volunteer for the job, she was thrilled because it meant she would get to deploy.

Selbach-Allen’s father was in the Marine Corps just after the end of the Vietnam War and never deployed, and she wanted to avoid a similar story.

Selbach-Allen went to Afghanistan with 3rd CEB in 2013, and was assigned to 1st Tanks when she returned.

Although she was one of the first women in both units, she said her gender has been a non-issue.

Critics of introducing women to combat roles have argued women simply aren’t as strong as men and couldn’t physically hack it. However, in Afghanistan, Selbach-Allen worked out with infantry Marines, taught a Cross Fit class and learned that she is stronger and fitter than some of the men.

“I don’t think you can make the claim that we’re slowing them down, or that we’re not capable of doing the job,” she said.

First Lt. Isis Culver, also a communications officer, was the first female officer to arrive at 1st Tanks, in January 2014.

She said she got a few doubletakes, but no negative comments.

“I love what I do and I love this unit,” she said. “It’s definitely been challenging, but not because I’m female.”

First Lt. Zully Pasindo Rubio, a supply officer, was the fifth female Marine to arrive at the unit. She said she had asked for the job because she heard it was one of the most challenging accounts for a supply officer in the Marines.

“Throw that word out there and I’ll volunteer,” she said. “That’s why I wanted to join the Marine Corps: the challenge.”

The difficulty isn’t related to her gender. Pasindo Rubio said each of the tanks is worth $2.5 million, and they break down often, so managing the accounts and money is not easy.

The male Marines seemed a little shocked to see her when she first arrived, she said, but she believes it was simply because of the novelty.

Pasindo Rubio, who also serves as a battalion high intensity interval training instructor, said she has never been treated any differently than male Marines.

Cpl. Jordan Kountz hasn’t been quite as lucky.

The motor transport truck driver who joined the Marines because her father was in the Army and she wanted “to do something a little bit harder,” said she was worried when she learned she would be one of the first women assigned to the artillery battery 1st Battalion, 11th Marines.

During pre-deployment training at Twentynine Palms with her previous unit – which has included women for years – Kountz and a few other female Marines were assigned to rooms at an infantry barracks. Male Marines saw the women, assumed they were part of the new gender integration efforts, and began posting nasty messages and photos of them on Marine infantry-themed Facebook pages.

Kountz said the male Marines posted things like, “How long do you think it will take for them to get pregnant?” and “Wait for the sexual assault reports to start rolling in.” They also posted updates when the women would leave the barracks for food or training, Kountz said.

Though the male Marines’ command and Kountz’s command dealt with the problem, she said the whole experience was “pretty creepy.”

However, she said, her gender has not been an issue in 1/11.

“No random cat calls or Wookie calls,” she said, referencing the nickname some male Marines on the infantry Facebook pages use to talk about female Marines.

Instead, she said, things have been good – even when living in the desert for the 1st Marine Division exercise.

‘Everybody’s a Marine’ When the Marines with 3rd Amphibious Assault Battalion found out women would be assigned to their unit, a few were “iffy,” said Cpl. Cody Langley, a crew chief.

They were concerned about where women would sleep, shower or go to the bathroom.

During the division exercise here, everyone slept on the ground and used portable bathrooms; there were no showers or special facilities.

“It hasn’t affected anything,” Langley said. “They do what we do.”

Maj. Peter Schnurr, executive officer of 1st Tanks, also said he wasn’t concerned when he heard that women would be assigned to the unit, and he didn’t sense any apprehension from the other men.

A total of 10 women have been assigned to the battalion of roughly 800 Marines; one of the women has since retired.

Though the unit has not deployed since the women arrived, the division exercise is designed to ensure the battalion is ready to go when needed and is “essentially like deploying,” he said.

There were no problems, and the unit was able to use a new system that Selbach-Allen and Culver were critical to bringing online.

“It’s been a positive experience for us,” Schnurr said. “At the end of the day, everybody’s a Marine.”

Crossing the infantry line Women began joining the Marine Corps Reserve in 1918, and Capt. Anne Lentz became the first female commissioned officer in the active-duty Marine Corps in 1943. Now, women make up about 7 percent of the Corps, and about 93 percent of the occupational fields are open to them.

But the heart of the Marine Corps is the infantry.

Although “every Marine is a rifleman,” some current and former infantrymen were horrified when Panetta and Chairman of the Joint Chiefs of Staff Gen. Martin Dempsey announced that women might be allowed to join ground combat units.

Allen West, who served in the Army’s 4th Infantry Division and in 2013 was a member of the House of Representatives, wrote on Facebook then that the decision to lift the combat exclusion policy was “the misconceived liberal progressive vision of fairness and equality, which could potentially lead to the demise of our military.”

Ryan Smith, a lawyer who served as a Marine infantryman, wrote in an opinion column in the Wall Street Journal at the time that during the 2003 invasion of Iraq, he and other Marines had no choice but to empty their bowels and bladders mere inches from their fellow Marines’ faces during 48-hour convoys. They also were lined up naked and washed with pressure hoses, he said.

Being forced to be naked in front of the opposite sex in a state of terrible hygiene “would be distracting and potentially traumatizing,” Smith wrote, and unit cohesion “can be irreparably harmed by forcing them to violate societal norms.”

But in April, as a team of artillerymen sat in the shade waiting to begin a late-night Howitzer shoot as part of the 1st Marine Division exercise, they couldn’t see any problem with allowing women to join artillery units – as long as they can do the job.

Lance Cpl. Corey Osborne, whose job involves using a staff to ram rounds into the M-777 Howitzer, said operating the weapon is fast-paced and physically demanding. He had to pass an artillery strength test during his initial training, he said, but as long as a woman can pass by the same standard, he doesn’t see why they couldn’t do the job.

Cpl. Andrew Sigo, who sets up the aiming points and helps operate the weapon, said that generally, just one man lifts the 97-pound round to load it, and that a fast crew can reload in six or seven seconds.

If women can do the same work, he said, “there’s no problem.”

Cpl. Tara-Lynn Morris, a truck driver with 1/11, the artillery battery, said she was one of six women from her previous unit who were assigned to the battery in January. Having deployed as one of only two women in a battalion of men, she said she was used to being in the extreme minority.

“Most male Marines don’t look at us differently,” she said.

Cpl. Blanca Pedroza, an administration Marine with 1st Tanks, said working with a previously all-male unit “wasn’t weird at all.”