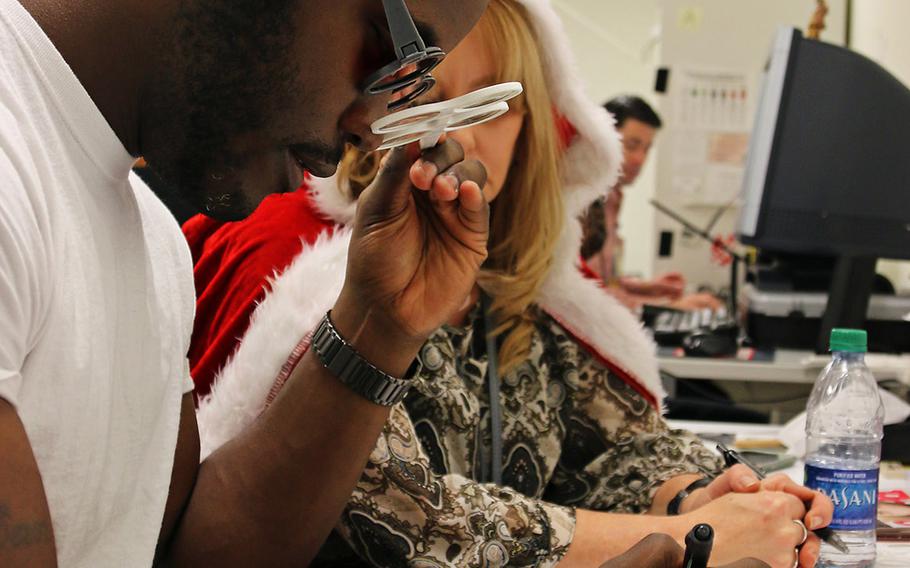 A patient at the Intrepid Spirit on Fort Bragg, N.C., works on a maze using colored glasses during vision rehabilitation, Dec. 15, 2017. The Intrepid Spirit Clinic is focused on traumatic brain injuries and associated conditions, and offers different forms of occupational therapy to patients. (Paige Behringer/U.S. Army)

The review is part of a settlement reached in the lawsuit Kennedy v. McCarthy, which was preliminarily approved Dec. 28, according to the Army. The service will look at discharges of veterans affected by PTSD, traumatic brain injury, military sexual trauma or other behavioral health conditions.

“Under the agreement, the Army will automatically reconsider certain discharge-status-upgrade decisions made by the Army Discharge Review Board between April 17, 2011, and the effective date of settlement that partially or fully denied relief to Iraq- and Afghanistan-era veterans with less-than-fully-honorable discharges,” the statement reads.

Veterans who were discharged and did not receive an upgrade to honorable from the review board between Oct. 7, 2001, to April 16, 2011, will also be able to reapply due to the settlement.

The lawsuit was filed April 2017 in the U.S. District Court of Connecticut by Army combat veterans Steve Kennedy and Alicia Carson, both of whom suffered from PTSD and other health conditions, but where given a general discharge despite their medical issues, according to the complaint. Their case was handled by the Veterans Legal Services Clinic at Yale Law School.

Kennedy served in the Army from 2006 to 2009, including a deployment to Iraq in 2007 and 2008. He returned home from the deployment with PTSD and major depression but was not properly diagnosed or treated by the Army, according to the court document.

“Mr. Kennedy continued to lead his team to top performance marks but began abusing alcohol, self-isolating, and self-injuring, which ultimately led to him going absent without leave for two weeks,” the document states.

His commander ordered a psychiatric evaluation and he was diagnosed with major depressive disorder but not PTSD, despite his symptoms. Kennedy was then discharged due to his two-week absence, according to the document.

Carson deployed to Afghanistan in 2010 and served with a Special Forces unit as a gunner, taking part in more than 100 missions, according to the court document. She was diagnosed with PTSD and a TBI by Defense Department and Department of Veterans Affairs doctors after returning from her deployment. Despite receiving a doctor’s note to excuse her from National Guard drills, the Guard discharged her due to her absences, according to the document.

Their appeals to the review board to have their discharges upgraded to honorable were both denied, according to the court document.

Now due to the settlement, Army, National Guard, and Reserve veterans who received a discharge that was downgraded from honorable while having a diagnosis or showing symptoms of military sexual trauma, PTSD, TBI or other behavioral health conditions, might be eligible for relief, according to the Army. Upgrades to a discharge are not guaranteed and will be decided on a case-by-case basis, the service said.

The Army has also agreed to change the procedures for how veterans apply to have their discharge status upgraded in the future and how the review board addresses these cases, according to the statement. Some of these changes include allowing veterans to appear via telephone to their review board hearings, more training for review board members and “updated protocols for decision making in cases involving symptoms or diagnoses of PTSD, TBI, MST or other behavioral health conditions.”

A hearing to give final approval on the settlement will occur March 24 at 10 a.m. EST. For more information on the settlement, veterans can go to at http://www.kennedysettlement.com and https://arba.army.pentagon.mil/adrb-overview.html.