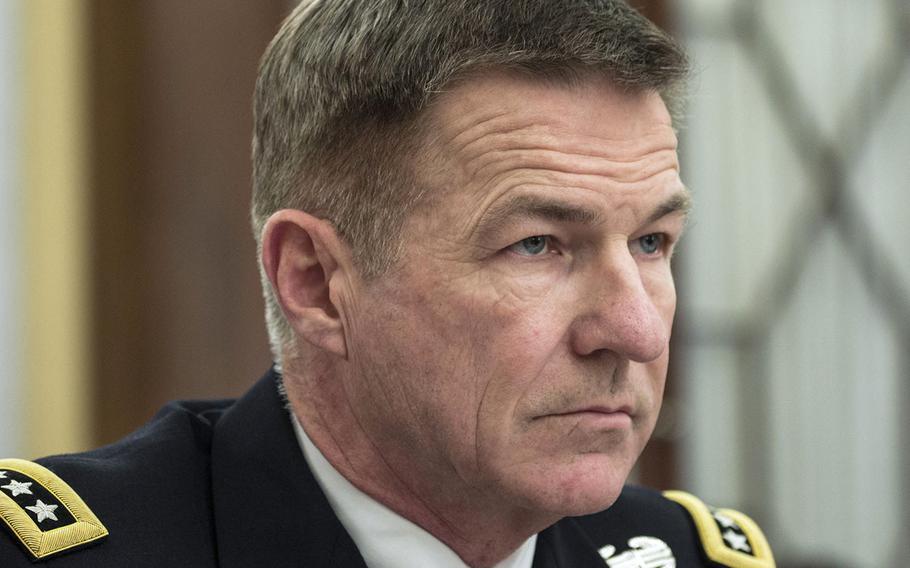 Gen. James McConville, at a Capitol Hill hearing in 2018. (Stars and Stripes)

WASHINGTON — The Army’s top general said Tuesday that the coronavirus pandemic is taking a toll on the mental health of soldiers and could be a factor in this year’s increase in suicides in the service.

“I’m very concerned about the behavioral health impacts of [the coronavirus pandemic]. It’s affecting the soldiers,” Gen. James C. McConville, the Army’s chief of staff, said during the annual Association of the United States Army event. “Some of the scientists have said they cannot show causation between [the coronavirus] and suicide but I would argue it is having an effect because it disconnects people.”

The Department of Defense released a report on Oct. 1 that details suicide numbers from the early stages of the pandemic from January to March and before the bulk of the country went into social isolation and the worst economic impacts were felt.

The department’s early 2020 report showed there were 85 suicides in the active components, 16 in the Reserve, and 23 in the Air and Army National Guard.

The available data on military suicides this year is incomplete. However, The Associated Press reported in September that military suicides have increased as much as 20% this year compared with the same period last year. Army leaders said they have seen about a 30% jump in the number of active-duty suicides so far this year and the increased numbers coincide with the start of the coronavirus pandemic.

The AP reported the Army, which is the largest branch of the military, saw the biggest spike from 88 soldier suicides last year to 114 as of Aug. 31 this year. The Army Guard saw a 10% jump in suicides, going from 78 last year to 86 this year. The Pentagon had not publicly released suicide data beyond March this year.

At the time that the Pentagon released its study on the first three months of the year, and the AP's reporting on a larger chunk of the data, military leaders wouldn't pinpoint the uptick in suicide to the pandemic.

“I can’t say scientifically, but what I can say is -- I can read a chart and a graph, and the numbers have gone up in behavioral health-related issues,” Army Secretary Ryan McCarthy said in an AP interview.

Yet Army leaders are concerned about social isolation and the squeeze some have felt from economic difficulties.

“When we look at the after-action reports of soldiers who have died from suicide it tends to be when relationships have gone bad, when they feel they don’t belong, they’re a burden,” McConville said Tuesday.

A key initiative that the Army is pushing now is building ground-level leadership.

“One of the initiatives we have is to give time back to our junior leaders to build a cohesive team, so when there’s an issue [soldiers] know who to go to,” McConville said. “You see this with [the pandemic], especially in the beginning, people felt disconnected.”

That feeling of disconnection is also seen in the veterans community.

Some experts have warned of the toll that nearly a year of social distancing and a strained economy can have on veterans. With less access to in-person therapy and isolation from friends and family, many veterans are reporting feeling disconnected from their community, according to a Wounded Warrior Project survey released in September.

Last week, President Donald Trump ordered the departments of Defense and Veterans Affairs and other agencies in his Cabinet to develop a plan within 45 days to tackle the mental health issues made worse by the coronavirus pandemic.