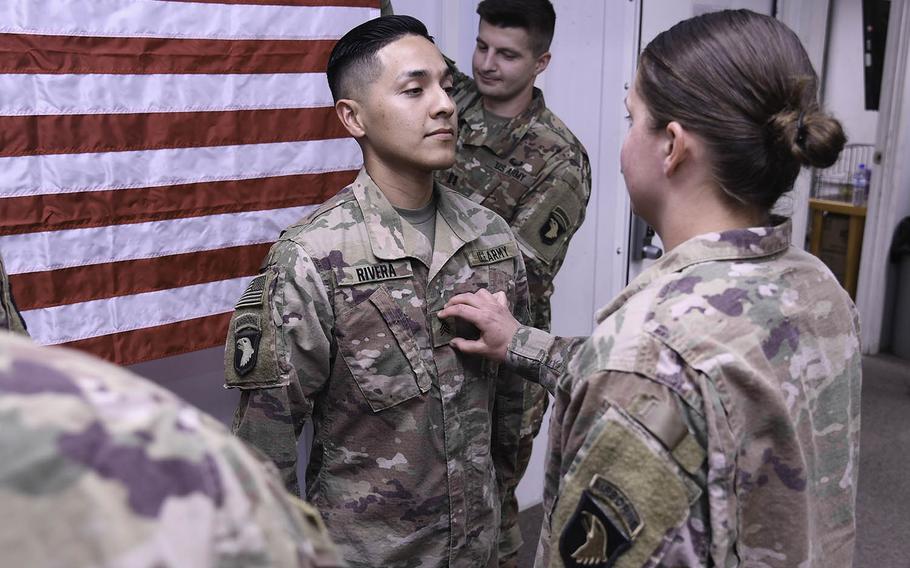 A U.S. Army soldier is promoted to the rank of sergeant at Bagram Airfield, Afghanistan, Oct. 5, 2018. (Steven Lopez/U.S. Army photo)

The Army’s promotion criteria for noncommissioned officers falls far short of assessing whether these enlisted leaders will be successful at mentoring and training their soldiers, a study released this week found.

Subpar NCO leadership is directly linked to attrition rates of junior enlisted soldiers, which comes at a financial cost to the Army because recruiting and training a single soldier costs roughly $60,000, the study said.

“Having a leader with the right mix of experience can potentially generate substantial savings,” the study said.

Early-term promotions of NCOs are generally automatic and predictable.

When a soldier is promoted to sergeant or staff sergeant, the most common factors considered are military training, military and civilian education, awards, decorations and achievements, the study said.

“Although unit commanders implicitly capture leadership potential when recommending junior soldiers for promotion, it is not until promotion to [sergeant first class] and higher that the Army begins to explicitly consider a soldier’s demonstrated leadership as part of the promotion process,” the study said.

But those early, quick promotions in and of themselves are not reliable criteria to judge whether NCOs will make excellent leaders as defined by both the Army and junior soldiers, the study said.

Based on Army doctrine and interviews with junior enlisted personnel, Rand identified attributes and skills associated with effective leadership. The Army’s leadership model calls for traits such as empathy, discipline, fitness, resilience, sound judgment, tact and others; skills include abilities to build trust, lead by example, communicate effectively and create esprit de corps.

Soldiers in ranks private through sergeant interviewed by Rand frequently stressed three broad qualities in effective leaders: those who care about their soldiers, effectively train them and are knowledgeable.

But these attributes and skills are largely absent as criteria in the promotion process until promotion to E-7, or sergeant first class, the study said.

For example, 40 percent of promotion points to sergeant are associated with physical fitness and weapons qualifications, a “disproportionate” allocation considering the doctrine set forth in the Army Leadership Requirements Model, the study said.

“These observations suggest that the Army is not identifying soldiers with leadership potential early in their careers and fostering them accordingly,” the study said. “These soldiers may be identified as part of an informal process of mentoring in the NCO support channels, but, doctrinally, the Army’s process is not oriented to identify those soldiers as a matter of course.

“As a result, the Army may be losing effective leaders early and limiting the pool of senior NCOs.”