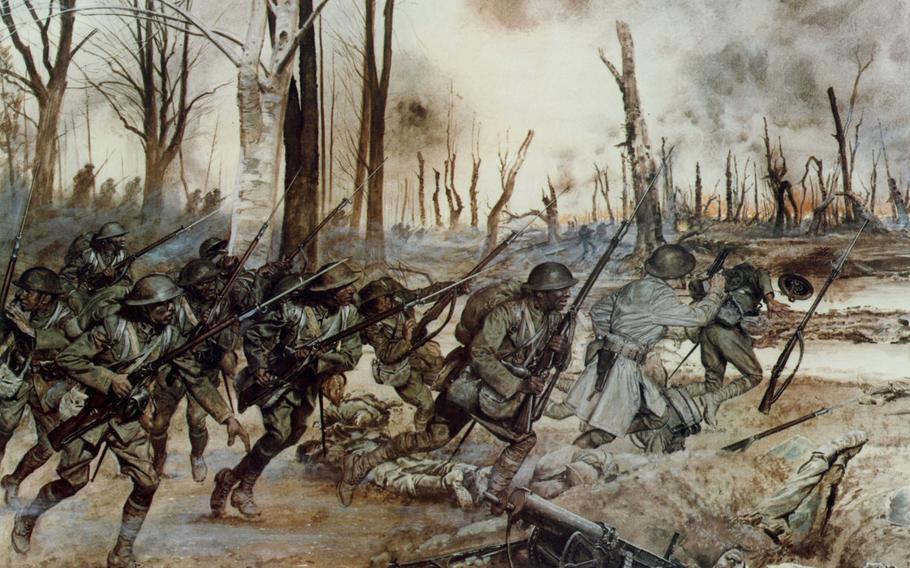 In this National Guard historic painting by H. Charles McBarron, soldiers of the 369th Infantry Regiment go into action near Sechault, France, on September 29, 1918 during the Meuse-Argonne offensive. The unit was dubbed the Hellfighters by the Germans, and while the nickname has been used for more than 100 years, it was only officially recognized by the Army in September 2020. (New York National Guard)

In this National Guard historic painting by H. Charles McBarron, soldiers of the 369th Infantry Regiment go into action near Sechault, France, on September 29, 1918 during the Meuse-Argonne offensive. The unit was dubbed the Hellfighters by the Germans, and while the nickname has been used for more than 100 years, it was only officially recognized by the Army in September 2020. (New York National Guard) 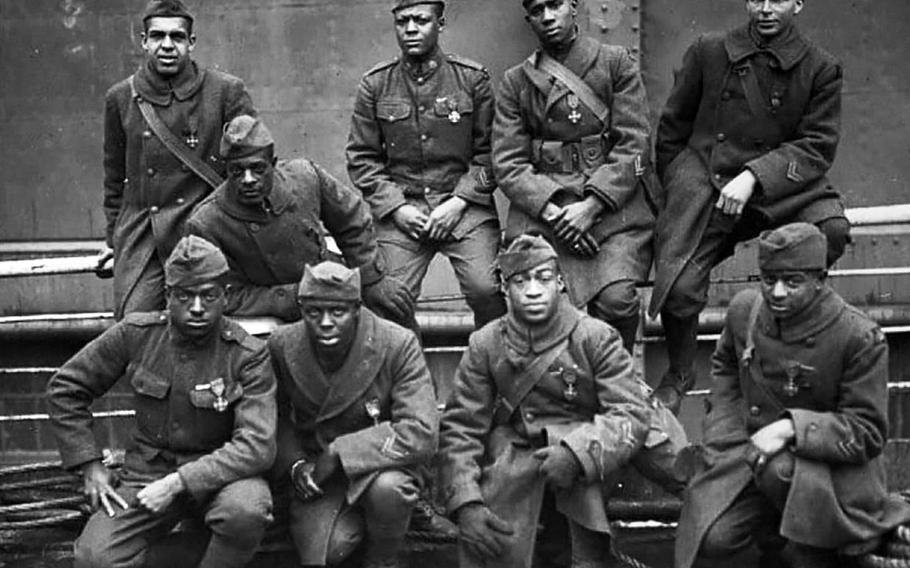 Nine soldiers of the 369th Infantry Regiment, known as the Harlem Hellfighters, were photographed upon their return from World War I. More than 100 years after earning that nickname, the Army in Sept. 2020 recognized the right of 369th Sustainment Brigade soldiers to call themselves Hellfighters. (National Archives) 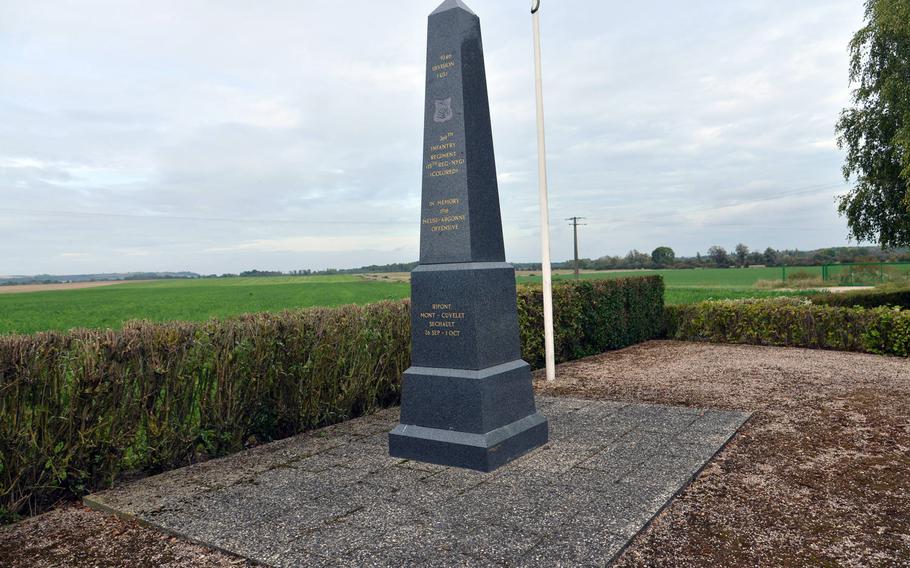 The monument to the 93rd Division's 369th Infantry Regiment near Sechault, France. A segregated unit of African-Americans nicknamed the Black Rattlers, they were dubbed the Hellfighters by the Germans in World War I. More than 100 years after earning that nickname, the Army in Sept. 2020 recognized the right of 369th Sustainment Brigade soldiers to call themselves Hellfighters. (Michael Abrams/Stars and Stripes) 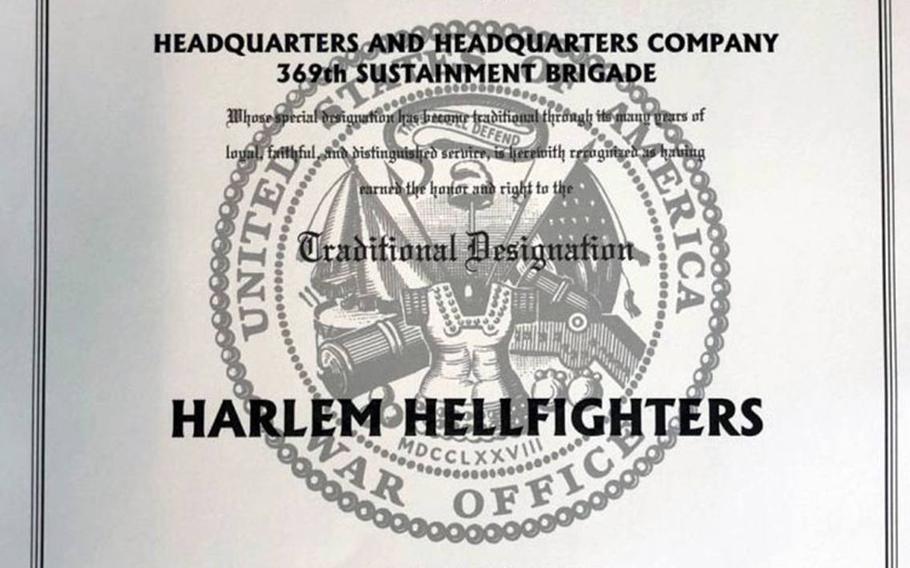 The certificate prepared by the U.S. Army Center of Military History at Fort McNair which makes official the nickname of Harlem Hellfighters, which the 369th Infantry Regiment and its descendents have used since World War I. (New York National Guard) 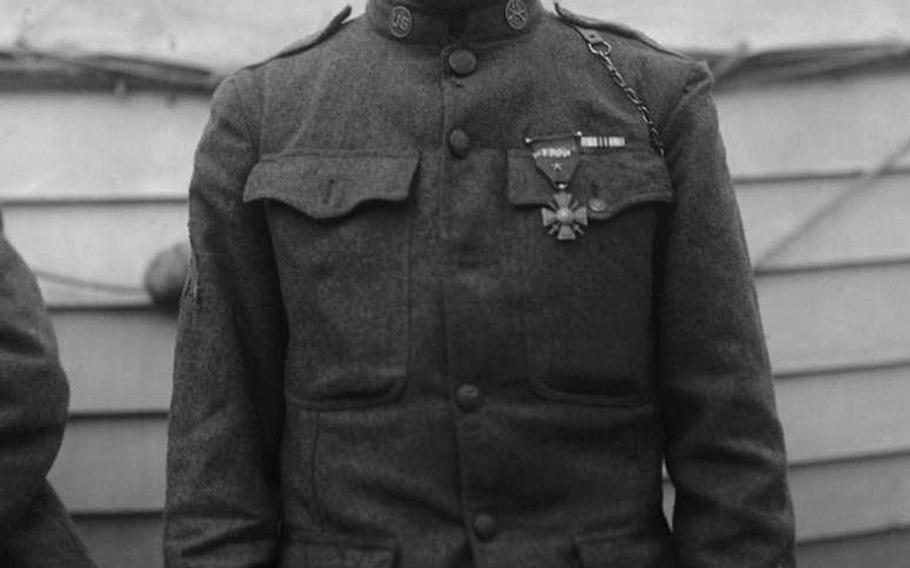 Pvt. Henry Johnson, of the 369th Infantry Regiment, was awarded the French Croix de Guerre for bravery after fighting German soldiers while vastly outnumbered, May 15, 1918. He was promoted to sergeant after returning to the U.S. and awarded the Medal of Honor in 2015. (Public Domain)

They called themselves the “Black Rattlers” and the French dubbed them “Men of Bronze,” but the Army now officially recognizes a historic Harlem unit by what the enemy called them in World War I — the “Hellfighters.”

The “Harlem Hellfighters” is now the official special designation for the 369th Sustainment Brigade, the New York National Guard said Friday. The unit traces its lineage to the all-Black 369th Infantry Regiment, which earned the moniker over a century ago in fierce fighting that’s been credited with helping to break down racial barriers.

The regiment was the first unit of the American Expeditionary Force in World War I that allowed Blacks to serve.

But they were denied a send-off parade with the 42nd Infantry Division, known as the “Rainbow Division,” after their commander was told they couldn't participate because “black is not a color in the rainbow.” The soldiers fought under the French army because white American troops refused to fight alongside them.

They proved themselves in 191 days of continuous combat, suffering 1,500 dead and wounded. They outpaced their French counterparts by 7 miles in at least one offensive, and were the first French, British or American soldiers to reach the Rhine River at the end of the war.

On their return home, the unit's 3,000 soldiers were honored by throngs of New Yorkers who turned up for a victory parade up 5th Avenue in February 1919.

“Racial lines were for the time displaced,” the New York Tribune wrote. “The color of their skin had nothing to do with the occasion. The blood they shed in France was as red as any other.”

Headquartered in the Manhattan neighborhood of Harlem, the regiment had earned 11 French citations and a unit Croix de Guerre, France’s highest military honor, which was also awarded to some 170 Hellfighters for individual acts of gallantry.

One of them was Pvt. Henry Johnson, a 5-foot-4-inch soldier weighing 130 pounds, who fought off some 20 Germans near his unit’s trench line one night in May 1918.

He was wounded 21 times but denied a disability allowance after the war. Hailed by former President Theodore Roosevelt as one of the war’s five bravest soldiers, he died destitute in 1929. It would take another 86 years for the U.S. to recognize his bravery with a Medal of Honor in 2015, nearly a decade after President Bill Clinton awarded him a Purple Heart Medal for his wounds.

A few years later, while working on a display at the newly renovated Harlem Armory in 2019, New York State Military Museum director Courtney Burns discovered the unit’s nickname had never been officially recognized.

“That was such a glaring error,” the statement quoted Burns as saying.

He notified Col. Seth Morgulas, the 369th Sustainment Brigade’s commander, who called the omission “crazy” and noted that Harlem River Drive, which runs by the armory, had been renamed “Harlem Hellfighters Drive” in 2003.

Over about a year, officials gathered materials needed to seek the designation, for which the Army requires a battalion or brigade to show its nickname has been in use for at least 30 years, or 50 years for company-level designation, the Guard said.

It wasn’t hard to verify the unit’s claim, said Joseph Seymour, a historian at the Army Center of Military History at Fort McNair in Washington. It’s just that nobody had ever done so officially.

The request was approved in September, memorializing the regiment’s historical nickname, said the statement released days before the start of Black History Month. The regiment joins over 700 units in the Army, some no longer active, which have official special designations, including 13 in the New York National Guard.