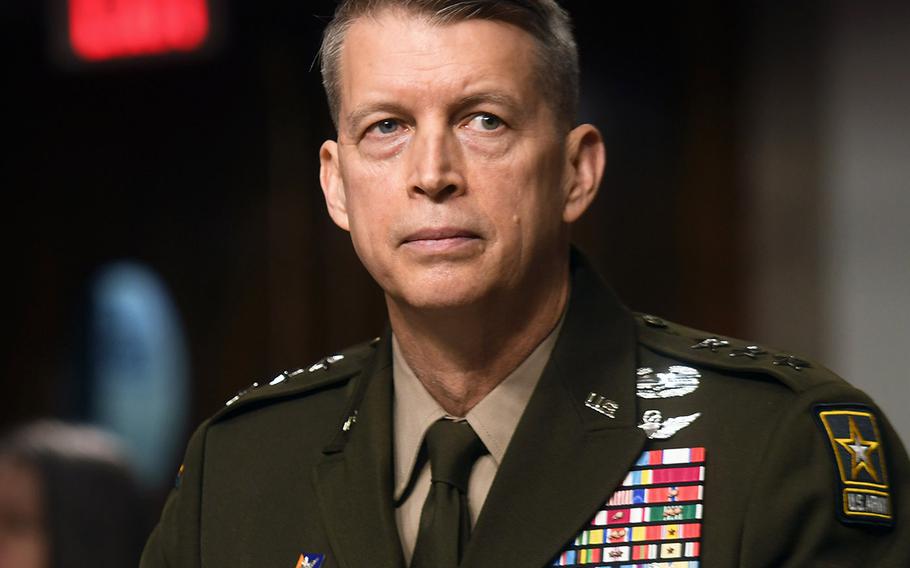 Army Lt. Gen. Daniel Hokanson testifies before the U.S. Senate Committee on Armed Services at a Capitol Hill confirmation hearing for his appointment to the grade of general and to be chief of the National Guard Bureau, June 18, 2020. (Jim Greenhill/Army National Guard)

WASHINGTON – Army Lt. Gen. Daniel Hokanson was confirmed Monday by the Senate as the 29th chief of the National Guard and takes the helm of the force at an unprecedented time with thousands of soldiers deployed overseas and throughout the U.S. to battle the coronavirus.

Hokanson, 57, is a veteran of Operation Just Cause, which was the invasion of Panama, and the Iraq and Afghanistan wars. He will be a member of the Joint Chiefs of Staff and will be promoted to a four-star general, according to the National Guard Bureau. He graduated from West Point in 1986 and served in air cavalry, attack helicopter, and aircraft test units.

Hokanson takes command of more than 450,000 Army and Airforce National Guard troops across the country. There are about 29,700 soldiers deployed throughout the United States to support coronavirus relief efforts such as providing tests and food distribution. More than half the nation’s governors are requesting to keep the Guard on federal orders, possibly through Christmas.

In early June, the Guard’s coronavirus missions and the racial justice protests increased the number of deployed troops to a peak of 75,000 soldiers and airmen. It marked the largest domestic use of the Guard in noncombat operations.

On Tuesday, Hokanson immediately stressed the need for the Guard to have a role in Space Force.

“As the United States Space Force is stood up, we’ve been staunch advocates that the National Guard units should also be part of that, as a Space National Guard,” Hokanson said in a statement, noting there are 18 Guard units engaged in space operations.

Hokanson will also oversee a historic shift in the Guard’s combat arms with more women taking command of infantry, armor, and cavalry units. There are 26 female infantry officers and 22 female armor/cavalry officers. There is one female commander in infantry and armor, according to the Defense Department.

“My intent would be to make sure that all of our formations reflect the diversity of the communities which they come from, that the diversity and ethnicity of our nation is reflected at every level of the organization,” Hokanson said.