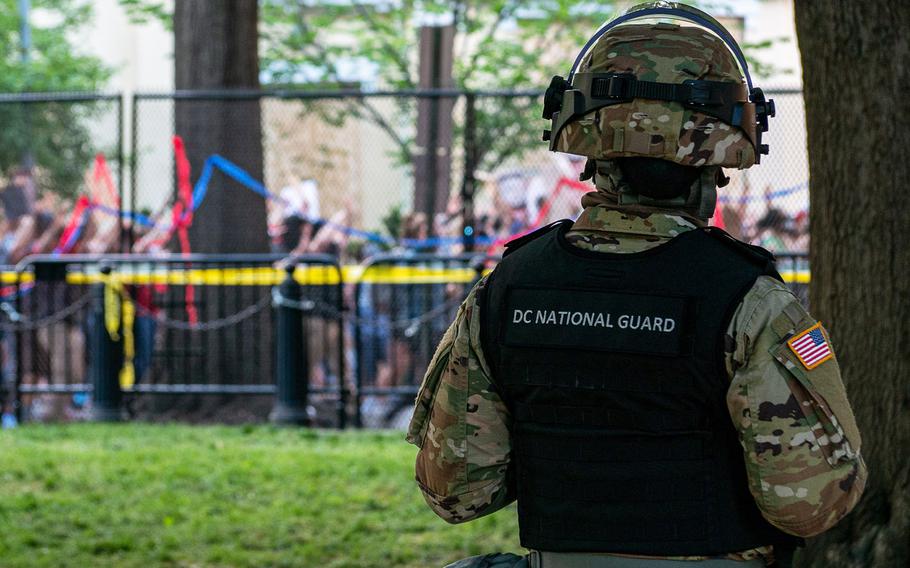 A District of Columbia National Guard soldier observes the Lafayette Park protest in Washington, D.C. on June 2, 2020. (Department of Defense)

WASHINGTON — Army leaders on Tuesday said they have not issued any specific guidance or training for soldiers to prepare for possible civil unrest surrounding Election Day nor do they have any plans to deploy the National Guard to Washington D.C.

“We don’t police American streets,” Army Secretary Ryan McCarthy said during the annual Association of the United States Army event. “There have been no requests from other agencies to support at this time but we’re always available to support.”

Gen. James McConville, the Army’s chief of staff, said there is no plan as of now for any specific training or domestic deployment plans if violence erupted as a result of the election.

“There’s been no planning guidance given to the Department of the Army to begin training for any situation,” McConville said. “But our soldiers and units are always prepared.”

McCarthy and McConville are the latest senior military leaders to try to quell fears leading into Election Day that the military will step in if the final vote becomes disputed or if polling places fall into chaos.

President Donald Trump has suggested he might not accept the results if he isn’t victorious in his reelection bid. He has fanned fears of widespread voter fraud as a result of a projected increase in mail-in voting due to the coronavirus pandemic.

Army Gen. Mark Milley, chairman of the Joint Chiefs of Staff, said in an interview with NPR on Sunday that the military plays no role in politics.

"This isn't the first time that someone has suggested that there might be a contested election," Milley said. "And if there is, it'll be handled appropriately by the courts and by the U.S. Congress. There's no role for the U.S. military in determining the outcome of a U.S. election. Zero. There is no role there."

This has been one of the busiest years in the National Guard’s history with thousands of troops being deployed across the country to provide support in battling the coronavirus and in response to upheaval amid protests against racial injustice.

In early June, the Guard’s coronavirus missions and its response to racial-justice demonstrations increased the number of troops deployed to a peak of 75,000 soldiers and airmen. It marked the largest domestic use of the Guard outside of a war scenario.