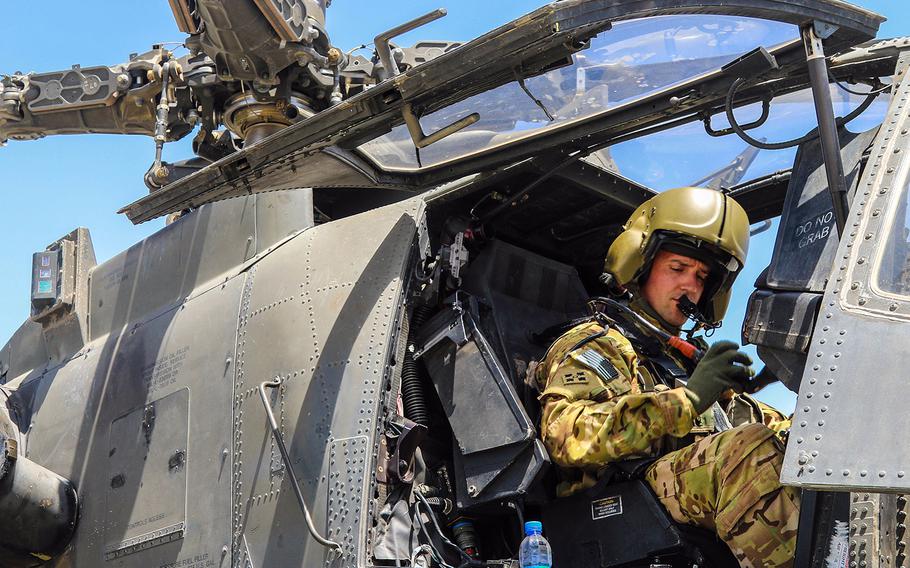 A U.S. Army AH-64 Apache pilot conducts final preflight checks before taking off in Afghanistan in April 2019. The Army announced new bonuses for pilots to try to keep them from being lured away by higher pay and better benefits paid by commercial airlines. ( Roxana Thompson/U.S. Army)

The Army will pay up to $1,000 a month in aviation incentives, the first increases it has offered in decades, as it tries to remain competitive with commercial airlines offering higher salaries.

The higher pay, which covers most pilots in the Army, Army National Guard and Army Reserve, became effective Jan. 1.

“This increase in (incentive pay), the first for Army pilots in over 20 years … is just one of many efforts underway to maintain aviation readiness and ensure support to the joint force,” Maj. Gen. David J. Francis, head of the U.S. Army Aviation Center of Excellence, said in a statement Friday.

Pilots with two years of Army service would receive $125 a month and those with more than 10 years of service would get $1,000 monthly under the new bonus plan, the Army statement said.

The monthly incentive rates hadn’t increased since 1999, when they represented almost 25% of base pay. Last year, incentive pay was equal to about 11% of base salary, the service statement said.

Last year, the Army’s pilot attrition rate grew to a record 10% of its force, due largely to aging aviators and competition. More than 40% of its warrant officers had more than 17 years of service, Army officials said in April.

Each of the Pentagon services has struggled to retain pilots, who are often lured away from the military by companies offering enticements such as signing bonuses, tuition reimbursement and a more predictable work schedule.

The exodus is likely to get worse. In North America alone, airlines will require some 200,000 new pilots in the next two decades as older pilots retire, industry analysts have predicted.

The other services also offer monthly incentive pay and have recently upped their retention bonuses.

The Navy will pay pilots $175,000 in bonuses over five years for staying in the service, it announced last month. The size of the bonus depends on the aircraft and length of reenlistment.

The Marine Corps in December announced it was offering bonuses of between $45,000 and $280,000 to reserve pilots who are willing to return to the cockpit.

Although the Air Force says its pilot retention rate has improved, the airlines value the aviators because they require only brief retraining before they receive a type rating for a commercial jet.