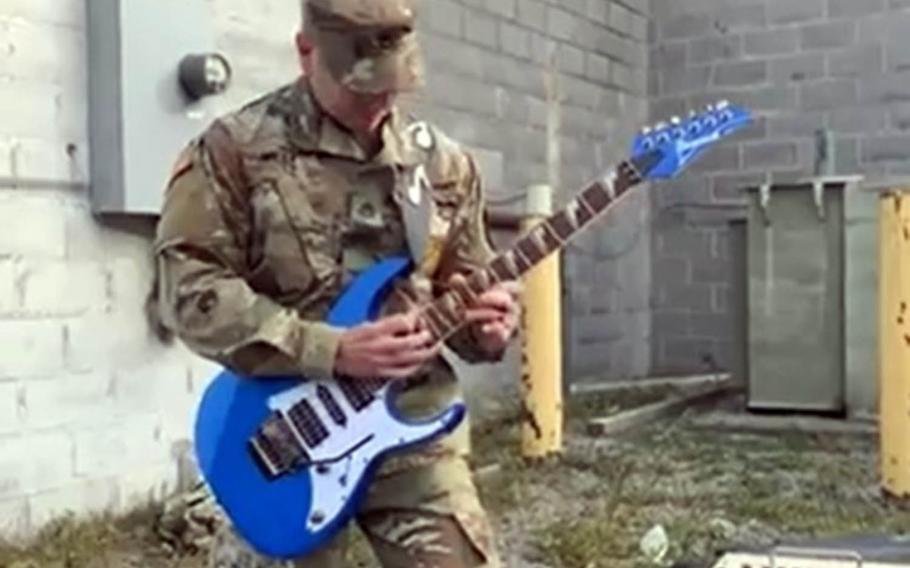 Staff Sgt. Austin West, an Army musician and recruiter in Watertown, N.Y., honors Eddie Van Halen by performing a medley of his group's hits in this screenshot from a Facebook Live broadcast, Wednesday, Oct. 7, 2020. (Facebook)

In the same way that music unites its listeners, so can grieving the loss of a legendary musician.

The recruiter based in Watertown, N.Y., swiftly became a viral sensation for a cover of a medley of Van Halen classic guitar riffs and solos. A video of the performance, posted via Facebook Live, has attracted more than a million views.

During the three-minute clip, West rips through a half-dozen of Van Halen’s best-known works, including “Eruption,” “Panama” and the band’s cover of The Kinks’ “You Really Got Me.”

West, who is also an Army musician, told Stars and Stripes via Facebook Messenger on Friday that he feels a connection both to his guitar and the late rock legend.

“Believe it or not, it just came through, and I played what I felt through Eddie,” he said.

The video united fellow rock aficionados in the comments section, with more than 60,000 messages Friday from veterans, service members and civilians sharing in their appreciation for the tribute and their memories attached to Van Halen’s music.

“Eddie lives on through you and the thousands of guitar players he inspired,” one of the messages said.

West, 26, said he started learning how to play the guitar after listening to an AC/DC cassette and was further spurred to become a musician after seeing Van Halen live in 2008.

“When you actually learn ‘Eruption’ on guitar and you’re 15 years old or 13 and it sounds completely horrible, you feel like a rock god,” he told Watertown CBC affiliate WWNY on Wednesday.

Before taking a turn at recruiting, West worked as a signal soldier and then a guitarist for the U.S. Army Band.

“What helps me get out of bed every day is knowing that I am going to help someone, whether it be in recruiting and helping change someone’s life and hearing their success stories or going out and playing in front of all these beautiful people,” he said in a soldier spotlight video for the U.S. Army Recruiting Command in February.

In 2015, West performed in a tour with the U.S. Army Soldier Show, an annual production that visits installations to feature the musical and theatrical talents of service members.

After his recruiting assignment, West will join the touring U.S. Army pop-rock group As You Were for a three-year stint, according to WWNY.

West said he is surprised by the Van Halen video’s popularity.

“Hitting one million [views] is so shocking,” he told Stars and Stripes. “I know Eddie is smiling.”