Army general: Military troops won’t be on the streets distributing coronavirus vaccines when they are ready 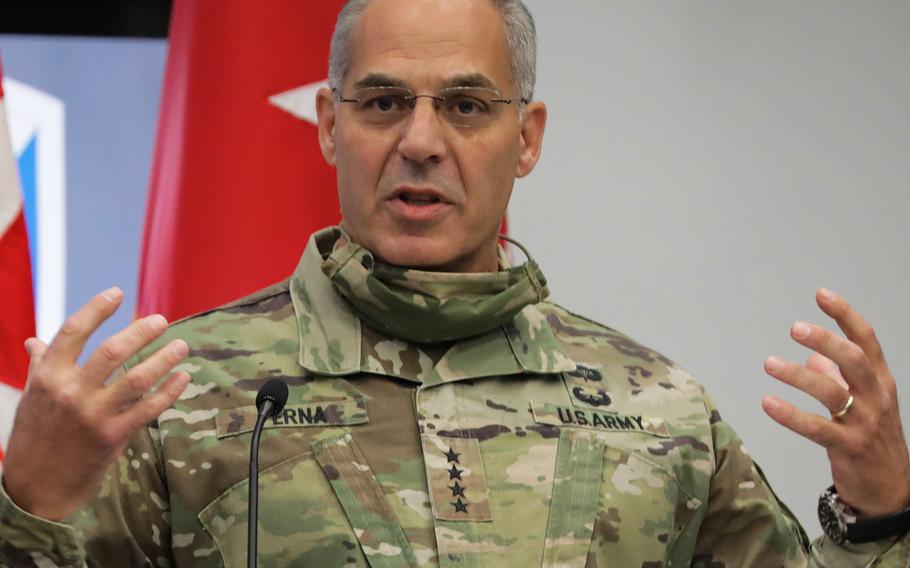 In a July, 2020 photo, Gen. Gus Perna, commander of the Army Materiel Command, speaks at a ceremony at Redstone, Ala. (Eben Boothby/U.S. Army)

WASHINGTON — Military troops will not have a hands-on role in distributing coronavirus vaccines to Americans once inoculations are ready to go to the public, said the Army general in charge of the federal government’s effort to quickly secure and dispense a vaccine.

“There will not be this vision that some people have that there will be Army trucks driving through the streets delivering vaccines,” said Gen. Gustave Perna, the chief operating officer of the public-private effort dubbed Operation Warp Speed. “That is not feasible or the right way to do it.”

The military’s role in the process is largely already being conducted, Perna said Tuesday during a virtual event with The Heritage Foundation, a conservative Washington think tank. That role is providing planning, contracting and logistical analysis necessary to move some 300,000 doses of a Food and Drug Administration-approved coronavirus vaccine across the country to be given to Americans.

Despite some recent setbacks, including brief pauses of clinical trials of two of the six drugs undergoing testing as part of Operation Warp Speed, Perna said he was certain the mission of producing a tested, approved vaccine for public distribution by January was on pace to happen. Clinical trials for those vaccines under development by Johnson & Johnson and AstraZeneca have recently restarted, the general said.

“We are really proud to be working together in this collective team to drive towards the solution of a safe and effective vaccine for the American people,” he said. “And, I am very confident that we are going to be successful.”

Perna spoke at the event as the United States faced a spike in coronavirus cases, including a new record high of 83,000 new cases on Friday, according to Johns Hopkins University. Another 63,000 new cases were reported Monday, as more than 8.7 million Americans have contracted the virus, of which more than 226,000 Americans have died of coronavirus complications during the pandemic, according to Johns Hopkins data.

Perna said McKesson Corp., a Texas-based pharmaceutical and medical supplies distribution giant, had been selected to move the vaccines across the nation. The company will be responsible for delivering vaccines to some 70,000 hubs throughout the country in an effort that Perna labeled “Herculean.” Ultimately, state and territorial governments will be responsible for getting Americans physically vaccinated.

All U.S. states and territories have recently submitted their distribution plans, and Perna said Warp Speed officials were working to finalized them.

Once the vaccine has been proven safe and effective and approved by the FDA, Perna said, the intention is to trigger the distribution processes, so the first groups of recipients can receive them as soon as within one day.

Officials said last week that the most vulnerable individuals — front-line health care workers and seniors — are first in line for the vaccine by the end of January. Operation Warp Speed officials hope to make the vaccine available by April to any Americans who want it. Pentagon officials have previously said military troops, other than front-line health care providers, will not receive special priority for the vaccine.

Dr. Matthew Hepburn, who is leading the vaccine development efforts for Operation Warp Speed, said Tuesday that he believes Americans should trust the process to produce and test the vaccines has been successful so far. On Tuesday, speaking alongside Perna, he encouraged Americans to participate in clinical trials, which still need tens of thousands of volunteers.

Hepburn said the companies working on the vaccines have proven they are capable of safely producing an effective inoculation at a pace never before attempted.

“We don't cut corners … [and] we make sure we maintain the highest ethical quality and regulatory standards, and we're transparent,” he said. “I strongly feel this has been an incredibly transparent process so that people will have confidence in the vaccines that we are generating.”

But not everyone agrees the process has been transparent.

On Friday, two Senate Armed Services Committee members called on committee leadership to hold a hearing to hear from military officials involved in Operation Warp Speed. Sens. Elizabeth Warren, D-Mass., and Mazie Hirono, D-Hawaii, called the Pentagon’s involvement in the process “outsized” in a letter to committee leaders Sen. James Inhofe, R-Okla., and Jack Reed, D-R.I. They pushed for a hearing to examine some $6 billion worth of defense contracts distributed as part of Operation Warp Speed and probe how involved key public health officials are in the efforts.

For now, Perna said his task force would focus on the mission at hand and promised it would not be impacted by outside issues, including results of the presidential election Nov. 3.

“We have our heads down and we’re driving the sled,” the general said. “We’re going to execute our mission as directed … We are successfully driving down the field.”