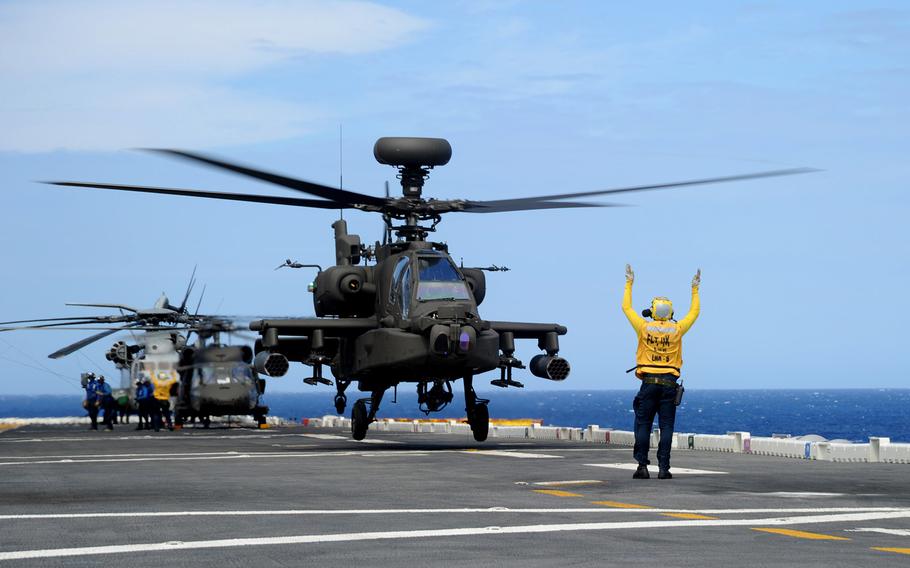 An Army AH-64E Apache Guardian helicopter takes off from the amphibious assault ship USS Peleliu in the Pacific Ocean during RIMPAC 2014 exercises. (Dustin Knight/Courtesy of the U.S. Army)

WASHINGTON — Army officials unveiled a proposed budget Monday that underscores the ongoing role of American troops in an array of global crises and offers a modest pay increase for active duty troops.

Spending for the Army’s baseline operations would rise from $120.8 billion to $126.5 billion under the requested budget. The proposal allocates $16 billion for aircraft, tactical and combat vehicles, weapons and ammunition, compared to $14 billion in 2015.

Overall spending for the Army would dip from $149 billion to $147 billion. The figure could drop further if Congress refuses to ease spending restrictions imposed on the Department of Defense and other federal agencies since 2011 through the process known as sequestration.

The wartime supplemental fund for what the military refers to as “overseas contingency operations” — a fund shielded from sequestration — would fall from $28 billion to $21 billion under the Army’s proposed budget.

The smaller supplemental budget reflects the end of U.S. military combat operations in Afghanistan in December after more than 13 years of war.

But nine of the Army’s 10 active duty divisions remain involved to some degree in so-called “named operations,” or regional engagements around the world. Some 8,000 soldiers continue to train Afghan forces, and the Army has dispatched units to the Middle East to aid the fight against the Islamic State, and to Africa to halt the spread of the Ebola virus.

“The amount and velocity of instability around the world is on the rise,” Maj. Gen. Thomas Horlander, the Army’s budget director, said at a Monday briefing at the Pentagon.

The Army’s request of $5.7 billion for aircraft marks a $473 million jump over last year, with plans to purchase 94 Black Hawk helicopters and upgrade dozens of Apache attack helicopters and Chinook cargo helicopters. Fifteen Gray Eagle drones would also be acquired.

Officials are seeking almost $2.5 billion for tactical, combat and support vehicles. The list includes 450 joint light tactical vehicles as the military begins to replace the Humvees that were the workhorses of the Iraq and Afghanistan wars. The Army and Marines have committed to purchasing 54,500 joint light tactical vehicles in the coming years.