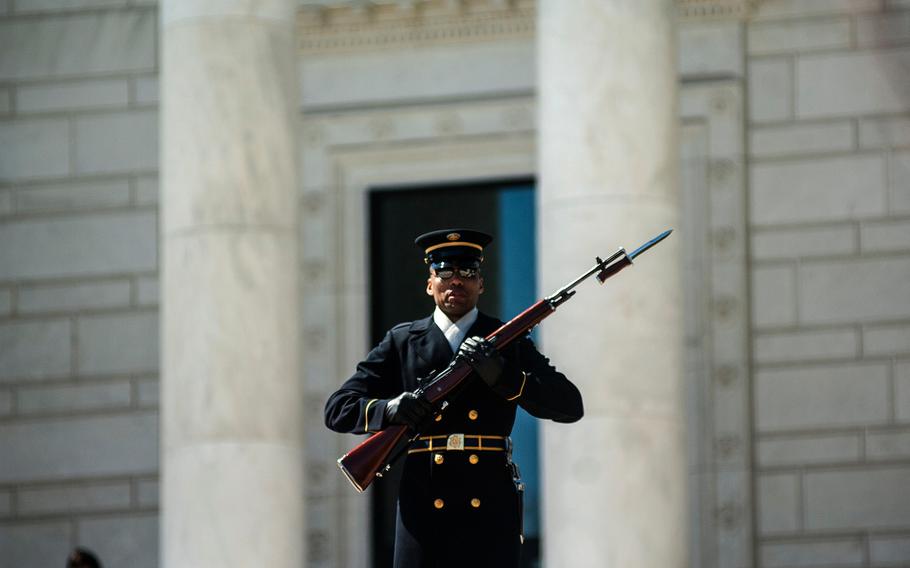 Buy Photo
A soldier stands guard at Arlington National Cemetery's Tomb of the Unknowns on March 23, 2018. Visitors and employees at the cemetery were evacuated Wednesday, Aug. 22, 2018, because of a bomb threat. (Carlos Bongioanni/Stars and Stripes)

WASHINGTON — Arlington National Cemetery reopened Wednesday after a bomb threat forced officials to close the facility to the public for about four hours.

Despite the cemetery’s closure, funerals still took place as scheduled.

On Wednesday morning, visitors and employees were evacuated from the cemetery after the bomb threat was made. Barbara Lewandrowski, a public affairs officer for the cemetery, said the threat was not for a particular building or location at the 624-acre cemetery but "to the cemetery at large."

Cemetery officials and emergency services personnel from nearby Joint Base Myer-Henderson Hall responded to the threat shortly before 11 a.m.

About 3 p.m., officials announced that responders had "cleared all areas" and the cemetery was safe. It was reopened until its normal closing time at 7 p.m.

The threat did not affect any of the 23 funerals that took place at Arlington on Wednesday, Lewandrowski said. While the cemetery was closed to the general public in the afternoon, funeral attendees were allowed to enter and were escorted to burial sites.

The source of the threat remained unclear Wednesday afternoon.

The cemetery, located in Arlington, Va., is the final resting place for more than 400,000 servicemembers, veterans and their families. It conducts about 7,000 funeral services each year.

"We take our responsibility seriously to ensure a safe and secure environment to our family members, guests, visitors and employees, and thank all our internal and external partners for their support and cooperation," Kate Kelley, cemetery superintendent, said in a prepared statement. "I would especially like to thank our family members for their patience during this time and our employees for continuing to support the funeral services today."