Amid spread of measles in state, Joint Base Lewis-McChord prepares to avoid a possible outbreak 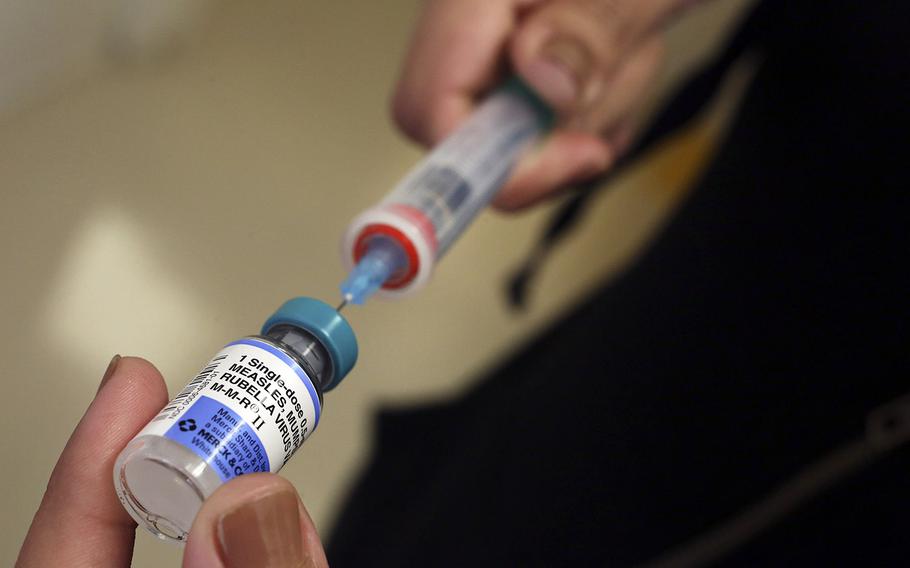 In a 2015 file photo, a vial containing measles vaccine is loaded into a syringe before being given to a baby at the Medical Arts Pediatric Med Group in Los Angeles. (Mel Melcon, Los Angeles Times/TNS)

WASHINGTON, D.C. — The spread of measles in southern Washington state has officials at Joint Base Lewis-McChord taking precautions to protect its servicemembers and families from the outbreak.

“I know our pediatrics department began to engage through social media, Facebook live events with our beneficiaries regarding questions associated with measles exposures and best way to prevent them,” said Lt. Col. Rodd Marcum, a doctor and chief of preventive medicine at Madigan Army Medical Center, which is part of the joint base.

The medical center is the second largest military treatment facility in Army medicine, with an enrolled patient population of about 105,000, according to Jay Ebbeson, a spokesman for the medical center.

Lewis-McChord is located near Tacoma, about two hours north of Clark County, where the public health department has confirmed 51 cases and 13 more suspected cases as of Thursday. One case was confirmed in King County, located next to Pierce County where Lewis-McChord is located, of a man in his 50s who said he had traveled to the city of Vancouver in Clark County, according to the county’s public health department website. Seventy-nine cases of measles have been confirmed in 10 states since last week, according to the national Centers for Disease Control and Prevention.

Since the outbreak, the medical center has worked to inform their health care providers in the hospital and to outside clinics. The preventive medicine department has also been communicating with state and local health departments to monitor the outbreak’s developments.

The installation has “very rigorous protocols to prevent communicable disease outbreaks within our population,” Marcum said. Those protocols include making certain children in day care centers who shows signs of a fever or rash get medical care and don’t infect others.

Measles is a highly contagious virus that is spread through coughing and sneezing, according to the CDC’s website. The virus can live in the air for up to two hours after an infected person has sneezed or coughed. People can become sick if they touch their eyes, nose, or mouth after coming in contact with contaminated surfaces or airspace.

“Measles is so contagious that if one person has it, 90 percent of the people close to that person who are not immune will also become infected,” according to the CDC’s website.

The majority of people who have been infected by measles in the Washington state outbreak were not vaccinated. The military follows the CDC’s Advisory Committee on Immunization Practices recommendations, which provides guidance on the use of vaccines in the United States.

“So when you think of our active-duty servicemembers, each of them has been confirmed to have the appropriate vaccination and immunity against measles, mumps and rubella,” Marcum said. Their families are also given the same CDC recommendations for routine adult and childhood vaccinations.

There have also been no suspected cases of measles at Lewis-McChord, Marcum said. However, there is always a risk of the measles outbreak spreading to the base because of how infectious it is, he said.

“But at the same time, we have such high rates of vaccination that it makes me reassured that it’s unlikely to have a profound impact at Joint Base Lewis-McChord,” Marcum said.

Joint Base Lewis-McChord is home to I Corps and the 62nd Airlift Wing, supporting a population of more than 40,000 active duty, Reserve, and National Guard servicemembers as well as 14,000 civilian workers, according to its website.