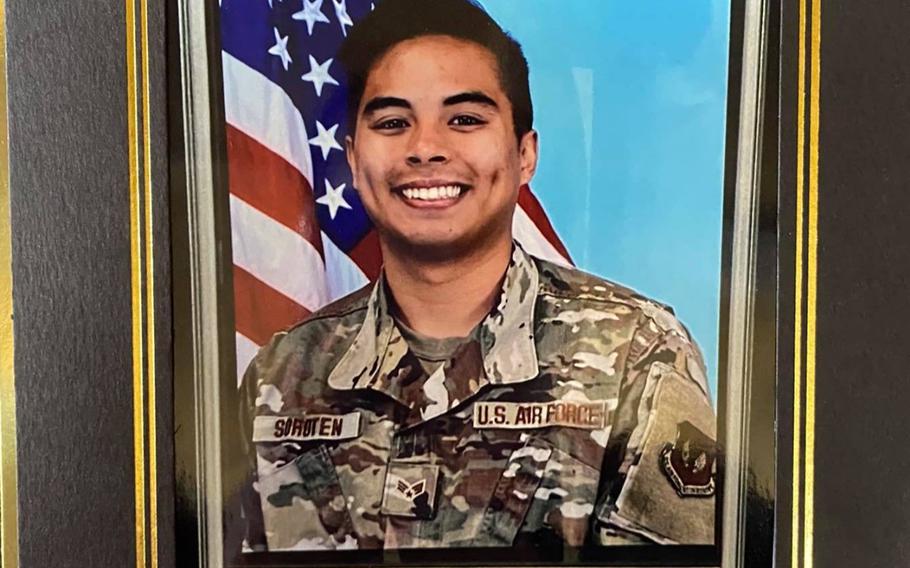 CAMP FOSTER, Okinawa — An airman who went missing Nov. 22 while surfing near Cape Hedo, and whose body was found five days later, was remembered Sunday as “a cherished member” of the 18th Munitions Squadron at Kadena Air Base.

The body of Senior Airman Jeremieh Soroten, 21, was recovered sometime Friday in the vicinity of Adan Beach in the Kunigami district where he was last seen, Kadena's 18th Wing said in a statement Saturday afternoon. The body had been identified that morning.

The exact cause of death is unknown and the incident is under investigation, according to a wing statement issued Sunday afternoon that provided Soroten’s name. Soroten's Facebook page said he hailed from Wahiawa, Hawaii.

“Jeremieh was a cherished member of our squadron,” Maj. Reco Doughty, 18th Munitions Squadron commander, said in the statement. “He was the type of Airman that seasoned senior non-commissioned officers saw the brighter parts of themselves in and his peers would do well to emulate. His time with the unit will leave an indelible mark on those fortunate enough to have met him. Jeremieh will be sorely missed.”

Soroten was last seen shortly before 9:10 a.m. on Nov. 22 by a surfing companion, a spokesman with the Japan Coast Guard’s Nakagusuku Office said Monday. Soroten was clinging to his surfboard about 300 yards offshore. He appeared unable to return to shore and was drifting farther out to sea.

The companion surmised his partner may have been exhausted and unable to swim back to shore, the coast guard spokesman said.

Soroten wasn't wearing a flotation device at the time, the spokesman said.

Airmen from the 31st and 33rd rescue squadrons searched through the night and into Monday, according to a wing statement Monday. The coast guard resumed the search Monday morning with a 100-foot boat, two smaller craft and an MH-915 helicopter from Naha Air Base.

A targeted search was called off as early as Monday, the coast guard spokesman said. Soroten’s surfboard washed ashore not long after he was last seen.