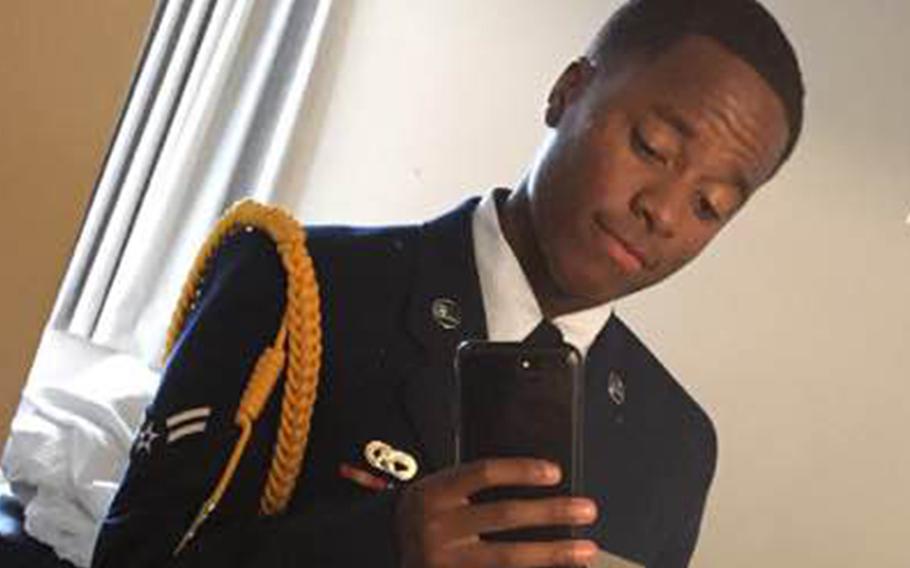 Then-Airman 1st Class Elijah Evans in a photo from social media. Evans, 23, a senior airman from Waldorf, Md., stationed at Eielson Air Force Base, Alaska, was found dead on Monday in North Pole, Alaska. His death is under investigation. (Courtesy of Elijah Evans/Facebook via U.S. Air Force)

An airman was found dead in a parking lot in North Pole, Alaska, Eielson Air Force Base officials said Tuesday.

Senior Airman Elijah Evans, 23, was found dead on Monday, according to an Air Force statement, though where he was found is unclear. The Air Force said it was a restaurant parking lot, while North Pole police quoted by KTVF News of Fairbanks said he was found at the Gorilla Fireworks parking lot.

The circumstances surrounding the incident are under investigation by the North Pole police and other local authorities, but foul play is not suspected, according to the Air Force statement.

The statement did not say if the airman was in a vehicle when he was found.

“We are heartbroken to have lost a valued member of our team yesterday,” Col. Benjamin Bishop, 354th Fighter Wing commander, said in the statement. “Eielson considers itself a family and the loss of Elijah is felt by each of us deeply. Our thoughts and prayers go out to his family and are with all those affected by this tragedy.”

Evans was assigned to the 354th Logistics Readiness Squadron at Eielson, and hailed from Waldorf, Md. He joined the Air Force on May 10, 2016, according to the statement.