Air Force updates 'deploy or get out' policy; 1,000 airmen could face separation 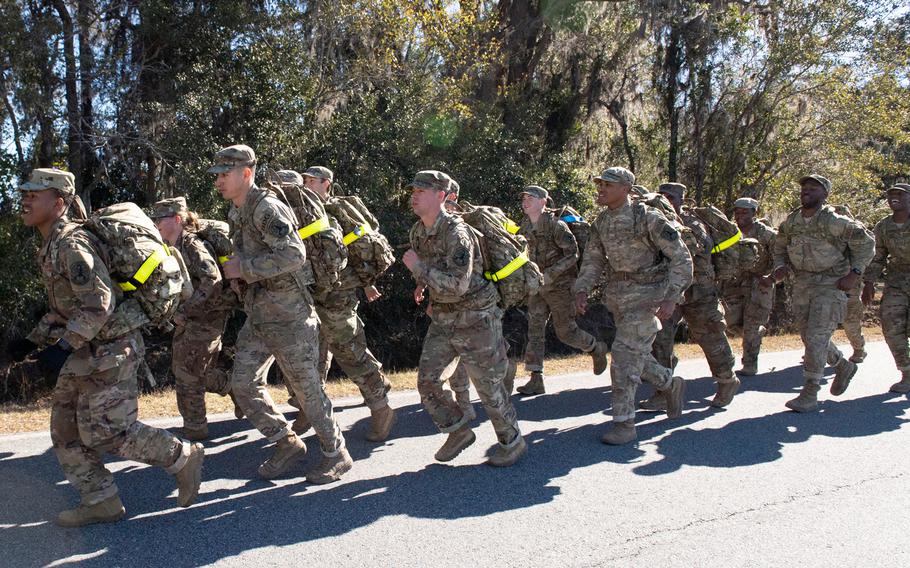 820th Base Defense Group Airmen pick up the pace during a Comprehensive Airman Fitness Day ruck march at Moody Air Force Base, Ga., Jan. 25, 2019. The formation marched three miles around the airfield to the Hoffman Auditorium, so Airmen could hear briefings from commanders and experts on physical fitness. (Faith Brodkorb/U.S Air Force)

WASHINGTON – All U.S. Air Force airmen who have had non-deployable status for more than a year will soon face a disability board or be considered for administrative separation as part of the service’s implementation of the Pentagon’s so-called “deploy or get out” policy.

A directive signed Tuesday by Air Force senior leaders states the service seeks to achieve a 95 percent or higher deployable rate within its units. The directive follows the October order by then-Defense Secretary Jim Mattis for the Pentagon’s military services to create guidelines meant to motivate servicemembers to retain their ability to deploy into combat after troops in non-deployable status ballooned to more than 11 percent in recent years.

“We expect all airmen to exercise personal accountability for their deployable status and to take the necessary steps to maintain their readiness,” stated the memo, which was signed by Air Force Secretary Heather Wilson, Chief of Staff Gen. David Goldfein and Chief Master Sgt. of the Air Force Kaleth Wright. “…The defense of our nation requires airmen and the Air Force be ready to deploy at all times.”

Mattis’ “deploy or get out” policy, which was rolled out one year ago and went into effect in October, was meant to motivate those thousands of troops who have remained in uniform despite being considered unable to deploy to support combat operations. Troops can be placed on non-deployable status for a variety of reasons including medical conditions, fitness problems and administrative issues.

In the Air Force, about 34,000 airmen were in non-deployable status in December, said Capt. Carrie Volpe, a service spokeswoman. However, the vast majority were in that status temporarily. Volpe estimated the new directive would only impact about 1,000 airmen, or about 0.5 percent of the force, who have been considered non-deployable for at least 12 months. Those individuals face separation.

The Air Force directive listed four requirements for its airmen to remain in deployable status:

Meet individual medical readiness standards, to include medical, dental and physical components. Be able to execute the wartime mission requirements of their respective career fields, to include technical, educational and physical proficiency. Be current on the Air Force Fitness Assessment. Be considered a satisfactory participant in Air Force Reserve and Air National Guard duties, if applicable.

It also provided exemptions from facing separation for those who are unable to deploy due to a variety of reasons. Those include airmen who are pregnant or postpartum, who are training or in a transient state, who are deployable with certain limitations, and those who are serving in positions exempted from deploying by the secretary of defense.

The Air Force policy also provides exemptions for those who have recently adopted a child, who are on a humanitarian assignment, those facing pending legal actions, airmen who are sole survivor/surviving family members or who are deferred from hostile force zone service. Conscientious objectors, airmen considered absent without leave and those facing pending administrative separation are also exempt from the policy, the directive states.

Final decisions about retention of airmen in non-deployable status will rest with the assistant secretary of the Air Force for manpower and reserve affairs, currently Shon J. Manasco, except for in the case of airmen facing separation after they were wounded in combat, according to the directive. The Air Force secretary would have the final say in such cases.

“As a member of the profession of arms, all airmen must be ready to execute their wartime missions,” Manasco said in a prepared statement. “Retaining airmen who meet our standards to deploy is a top priority.”