Air Force robot dogs patrol where airmen would rather not tread 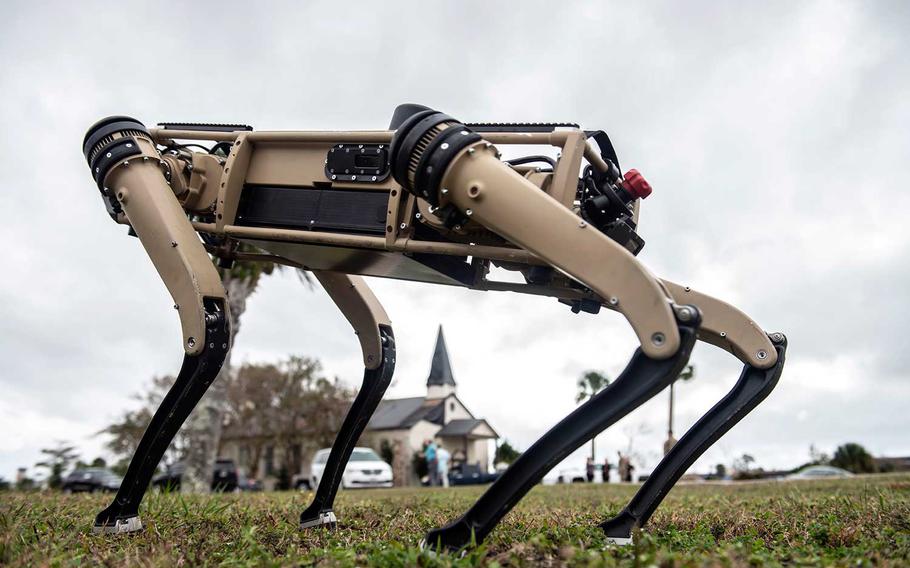 A robot dog stands on the grounds of Tyndall Air Force Base, Fla., during a demonstration held Nov. 10, 2020. (Tiffany Price/U.S. Air Force)

Security forces at Tyndall Air Force Base in Florida have begun using robot dogs for patrolling the installation, a first for the mechanized pooches.

“The 325th Security Forces Squadron is the first to implement semi-autonomous robot dogs in patrolling,” the Air Force said in a video on Friday.

“The computerized canines will be programmed to patrol areas that aren’t desirable for human beings and vehicles,” the Air Force said.

The Air Force did not specify how many robot dogs are patrolling the 29,000-acre base on the outskirts of Panama City on the Florida Panhandle.

The headless robots walk on four legs, with backward-bending “knees” that simulate those of real dogs.

The base and squadron have been working over the past year with two private firms – Ghost Robotics and Immersive Wisdom – in an overall effort to develop what the Air Force calls a Virtual Security Operations Center.

The robot dogs are part of that security enhancement, and they were demonstrated earlier this month at the base.

The robots aren’t intended to replace real working dogs, but rather “will be used as a force multiplier for enhanced situational awareness,” Maj. Jordan Criss, commander of 325th Security Forces Squadron, said in a news release after the Nov. 10 demonstration.

The patrol path of the robot dogs is set and monitored by the noncommissioned officer in charge of the Security Forces Electronic Security Sensor System, Criss said.

A virtual reality headset developed by Immersive Wisdom is used to navigate the robots, he said. Mobile cameras allow human operators to view what the robots see, and a radio link can be used by security personnel to communicate with anyone the bots encounter.

“These dogs will be an extra set of eyes and ears while computing large amounts of data at strategic locations throughout Tyndall Air Force Base,” Criss said. “They will be a huge enhancement for our defenders and allow flexibility in the posting and response of our personnel.”