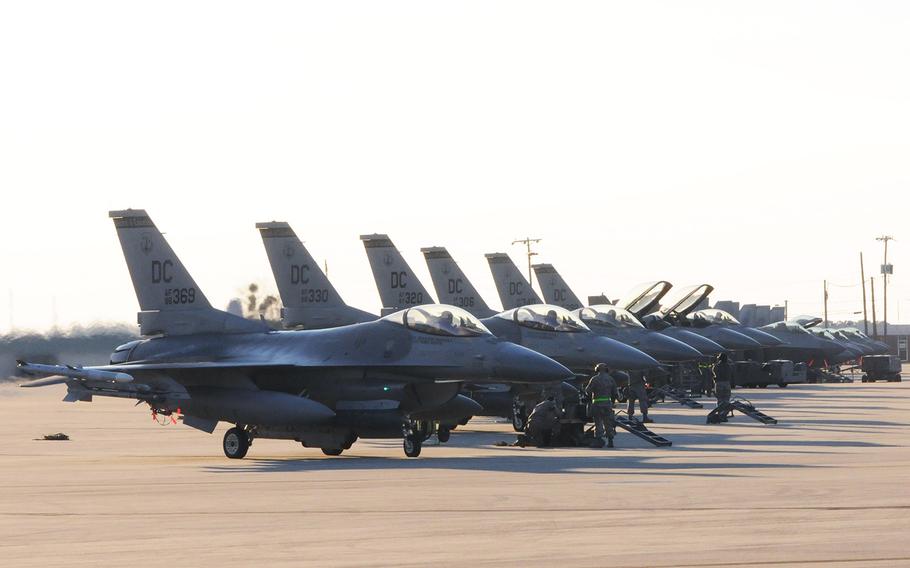 WASHINGTON — An Air National Guard pilot suffered minor injuries Wednesday morning after the F-16C fighter jet that he was flying crashed near Joint Base Andrews, the Air Force said.

The aircraft crashed at about 9:15 a.m. in a wooded area in Clinton, a Washington suburb in Maryland, roughly six miles southwest of Andrews, the service said.

The pilot, who is a member of the 121st Fighter Squadron of the Air National Guard's 113th Wing, was conducting regular flight training in the F-16C, which is a single-seat fighter jet.

The pilot had just taken off from Andrews along with three other F-16s to fly to a Pennsylvania training range for target practice, said Lt. Col. Mike Croker, commander of the 121st Fighter Squadron. Several minutes after takeoff, the pilot realized the aircraft had experienced a mechanical issue, Croker said, without providing details.

The jet was 12 miles from Washington and loaded with two 2,200-pound fuel tanks and training ammunition, which are inert rounds that have a small amount of gunpowder in them to fire, but are not filled with explosives, said Brig. Gen. George Degnon, the senior military official for the D.C. National Guard.

As the jet lost altitude, the pilot managed to turn the aircraft and jettison the fuel tanks before parachuting to safety, Croker said. The pilot ejected at a height between 2,000 and 3,000 feet, he said.

The 113th Air National Guard is responsible for keeping aircraft on alert and ready to launch with little notice if the protected airspace over Washington is breached by unauthorized aircraft.

News of the crash came as Air Force Chief of Staff Gen. David Goldfein and the other service chiefs were on Capitol Hill testifying to Congress about the impact that the lack of funding could have on the military if lawmakers did not pass a budget for 2017.

Goldfein said the Air Force would face a $2.8 billion cut in spending and cause a reduction in training flight hours after June for many squadrons.

Based on Air Force and Navy data, the rate of crashes, or mishaps, has increased across the services in recent years as budget cuts and an expanding war against the Islamic State group has cut into training flight hours and has worn down equipment faster than had been expected.

"If you heard jet noise this morning driving to the capital, it was likely the F-16s from the 113th Air National Guard wing at Andrews who sit on strip alert to defend the city, just as we do across the nation to defend our homeland from attack," Goldfein said. "I learned just walking in this morning that we lost an F-16 from that wing this morning and I'm proud to say ... the pilot got out and he's OK."

Croker would not identify the pilot, who he said was "in good spirits" at home. Croker was able to visit him earlier in the day at a nearby hospital. The pilot had suffered minor injuries from ejecting.

This is the USAF pilot after safe ejection and descent pic.twitter.com/3kLV9NOhx2

Local fire and rescue from Clinton, which abuts the base, asked local residents who might find pieces of the wreckage not to touch them and to notify authorities.

Brady said there were no other reports of injuries and he didn’t know whether anything on the ground was hit.

The Air Force is investigating the cause of the crash, the service said.

RAW VIDEO after pilot ejects from plane before it crashed miles from Joint Base Andrews: https://t.co/8KBqmD4p9fpic.twitter.com/CwSXuO4m41