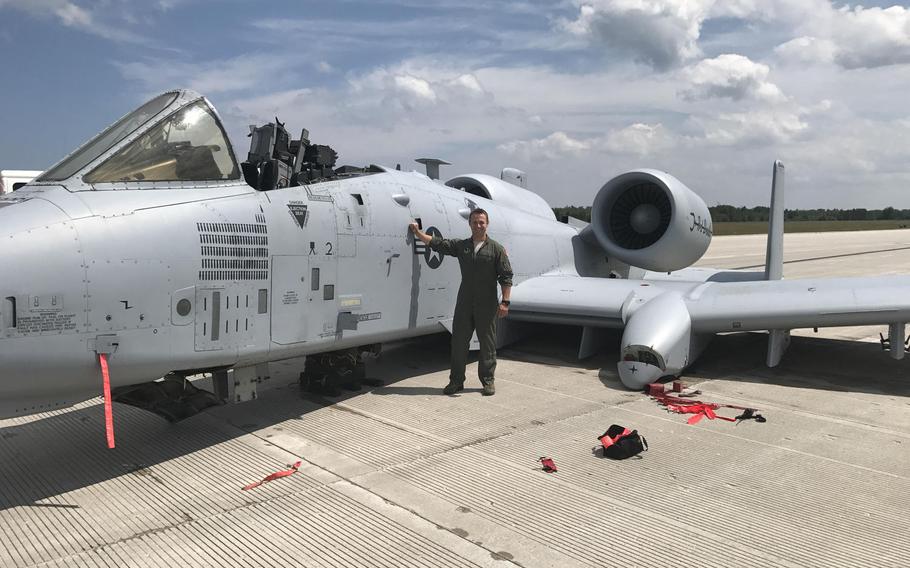 Capt. Brett DeVries, an A-10 Thunderbolt II pilot with the 107th Fighter Squadron, Selfridge Air National Guard base, Mich., poses next to the aircraft he safely landed after damage forced him to make an emergency landing July 20, 2017. He was awarded the Distinguished Flying Cross on Friday for his actions. (Terry Atwell/U.S. Air Force)

Capt. Brett DeVries, an A-10 Thunderbolt II pilot with the 107th Fighter Squadron, Selfridge Air National Guard base, Mich., poses next to the aircraft he safely landed after damage forced him to make an emergency landing July 20, 2017. He was awarded the Distinguished Flying Cross on Friday for his actions. (Terry Atwell/U.S. Air Force) 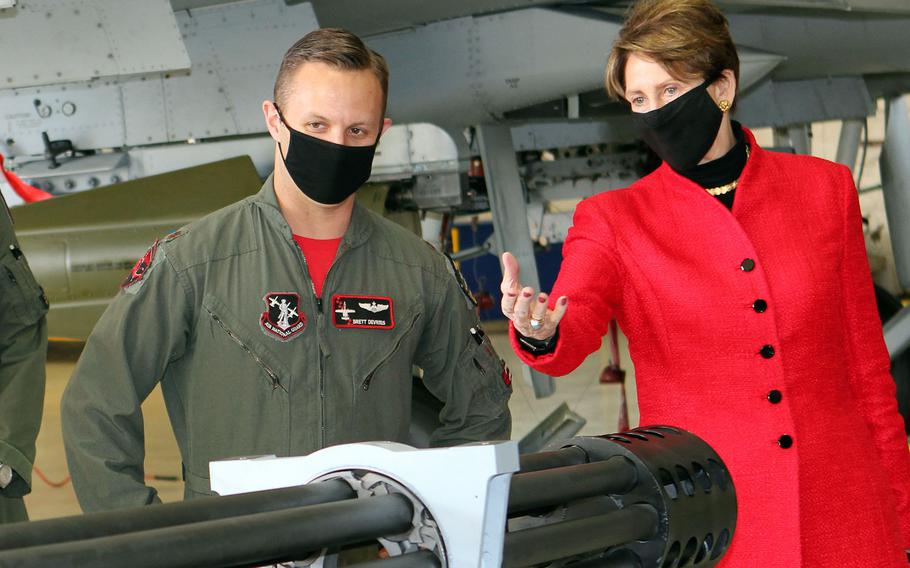 Maj. Brett DeVries briefs Air Force Secretary Barbara Barrett on the main weapon system used on an A-10 Thunderbolt II aircraft. The secretary visited Selfridge to award DeVries the Distinguished Flying Cross for superior aerial achievement, after he landed an A-10 with damaged landing gear and a missing canopy during a 2017 training flight over northern Michigan. (Dan Heaton/U.S. Air Force)

An Air Force A-10 pilot has been awarded a Distinguished Flying Cross for landing his jet without serious injury after the cockpit canopy blew off and the landing gear failed during a training flight.

“Maj. DeVries, you certainly demonstrated heroism and extraordinary achievement in your flight,” Barrett said during a ceremony Friday at Selfridge Air National Guard Base, Mich., northeast of Detroit.

During the training flight in 2017, DeVries flew for 25 minutes after a misfire in the aircraft’s 30 mm cannon caused the canopy and several panels to blow off, Barrett said on Twitter. His “deft expertise” allowed him to save the aircraft and walk away with only minor injuries, she said.

It was believed to be the first time in the air support jet’s 40-year operational history that a pilot had to land with the landing gear up and no cockpit canopy, the Air Force said after the incident on July 20, 2017.

In April, an Air Force A-10C Thunderbolt II made a similar belly landing at Moody Air Force Base in Georgia after returning from a training flight. That pilot was also not injured, the service said.

DeVries, an experienced pilot with the 107th Fighter Squadron of the 127th Wing, who had flown nearly 120 combat missions overseas, was on a routine training mission from Selfridge to the Grayling Air Gunnery Range with three other Warthogs during the incident.

The 30-minute flight was one he’d made probably 300 times in his seven years flying with the Michigan Air National Guard, he said. On that clear Thursday afternoon, the pilots planned to drop dummy bombs and make strafing passes with the 30 mm GAU-8 Avenger Gatling-style nose gun.

After they made six bomb passes and one strafing run each, DeVries was on his second pass — at a speed of 325 knots, or about 375 mph — when the gun malfunction sent the canopy flying. The rush of wind slammed his head back into the seat.

“It was like someone sucker punched me,” he was quoted as saying in an official account weeks after the incident. “I was just dazed for a moment.”

He instinctively pulled back on the stick to quickly gain altitude, climbing from 150 feet to around 2,000 feet, which he credited to his training.

“The training — that’s what saves you and your wingman,” the former enlisted airman said.

Maps and checklists blew around inside the cockpit as he lowered his seat to protect himself from the buffeting winds. His wingman, Shannon Vickers, then a major, soon noticed something was wrong and flew below him to visually inspect the plane for damage.

Meanwhile, DeVries wasn’t sure whether the ejection seat had been compromised. After conferring with Vickers — a pilot with a decade of experience who’d also worked on A-10s as an enlisted weapons specialist — he decided to try his landing gear.

Flying just beneath DeVries, Vickers watched for issues with the gear, mindful that a loose part might fall off and damage his own plane. It turned out the nose gear wouldn’t lower, but fortunately the main gear retracted when DeVries raised it again.

“Landing a plane with the gear down is good,” the Air Force said in its 2017 account. “Landing with it up is not ideal. Landing with some of it up and some of it down, well, those stories seldom end well.”

After deciding to go ahead with landing, DeVries lined up for his approach at the nearby Alpena Combat Readiness Training Center and put the Warthog down on the runway centerline “in a near textbook landing,” the official account states.

“I flew him down, calling out his altitude,” Vickers said. “He came in flat, I mean it was a very smooth landing.”

Once on the ground, DeVries “expeditiously exited the aircraft — gulping deep [breaths] until he was certain there would be no explosion,” said the Air Force account, in which experienced pilots credit both DeVries and Vickers for their skill and cool-headedness.

DeVries exhibited “a level of airmanship to which we should all aspire,” Brig. Gen. Rolf E. Mammen, commander of the 127th Wing, said at last week’s ceremony.

His “combination of skill, judgement and selflessness is what earns a Distinguished Flying Cross,” Barrett wrote on Twitter. “His actions epitomize the courage and skills of the @127Wing, the @AirNatlGuard, and the @USAirForce.”