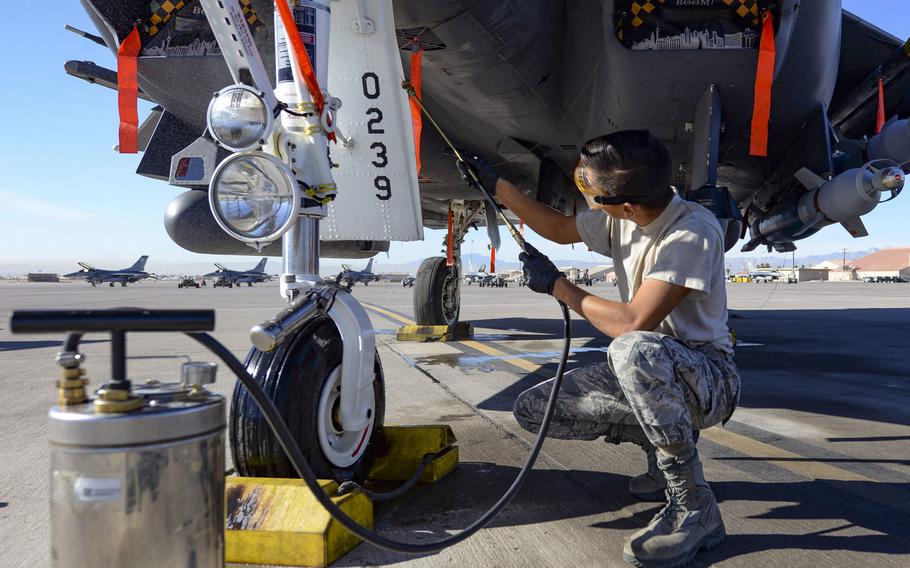 KAISERSLAUTERN, Germany — The Air Force has partially recovered from steep cuts that forced out thousands of aircraft maintainers in 2014 but remains short of experienced maintainers, a gap that could increase in the future, a government watchdog report said.

The Government Accountability Office said the Air Force lacks a retention strategy and annual retention goals for maintenance personnel, due in part to the workload and stress from not having enough experienced maintainers.

“Without goals to measure progress and a retention strategy to guide efforts, the Air Force could face further challenges in managing its maintenance workforce, including ensuring there are enough experienced maintainers to meet mission needs,” said the GAO report, published this week.

With more than 100,000 members across the active and reserve components, maintainers comprise the service’s largest enlisted career field, but the Air Force has blamed shortages for limits on its ability to meet mission requirements.

The GAO report found the Air Force has taken steps to significantly reduce the gap in staffing levels, from a peak shortage of 4,016 maintainers in 2015 to 745 in 2017.

However, those numbers are down largely because of a surplus of less-experienced technicians. In 2017, the Air Force had jobs unfilled for more than 2,000 E-4 and E-5 airmen, along with 439 jobs unfilled at the E-6 and E-7 level.

The service in 2015 began increasing retention bonuses to keep certain maintainers in critical fields. But in discussion groups with the GAO, former airmen identified job dissatisfaction as a reason for not re-enlisting.

“Participants stated that the lack of experienced maintainers has increased workloads and stress levels, which they stated may negatively affect reenlistment decisions,” the GAO said.

Former airmen also said it was challenging to train large numbers of new personnel arriving at their squadrons.

The Air Force agreed and said it had already begun work on both recommendations.

“The maintenance manpower deficit did not merely occur due to maintainers volunteering to separate in mass numbers in the past decade,” the Air Force said in its response to GAO. “Instead, force management and budgetary actions involuntarily pushed our maintainers out of the (U.S. Air Force).”