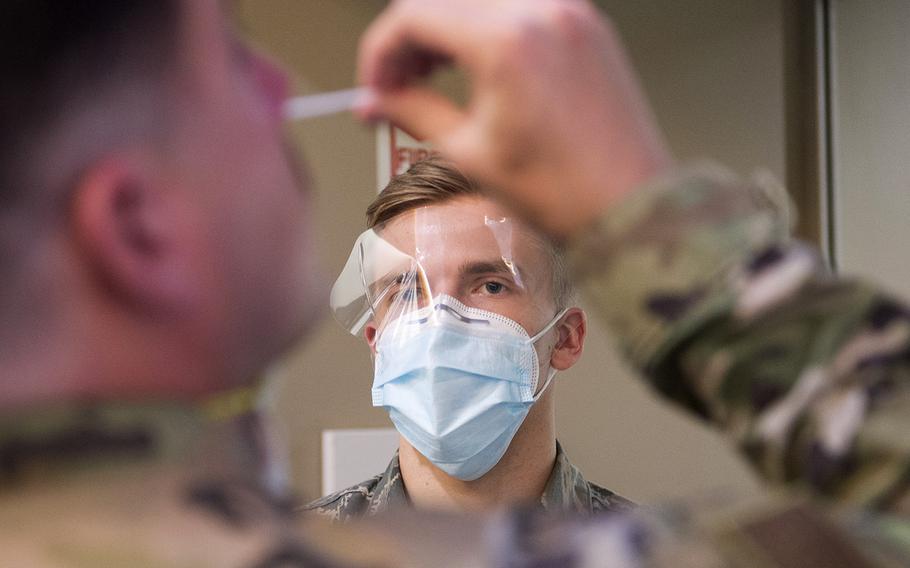 AUSTIN, Texas – Airmen in specific jobs are now being selected for random coronavirus testing to determine whether further public health actions are needed to identify asymptomatic personnel and prevent the spread of the virus, the Air Force Materiel Command has announced.

Conducted in two-week increments that focus on specific base populations, the efforts will test 100 personnel at each location within the first two months. Though airmen are selected randomly for the testing, participation is voluntary and the results will not go into an airman’s health records.

“This method of testing will ensure our airmen remain protected and combat ready,” said Col. Robert K. Bogart, command surgeon for Air Force Materiel Command. “An integral part of defeating this disease is to know where we stand command-wide. With this capability in our toolbox, we will be able to more accurately determine where transmission occurs.”

The testing effort is part of a larger overall Air Force strategy to randomly test Air and Space Force military and civilian personnel to identify and contain pockets of the coronavirus, according to the command. By testing people without symptoms, officials aim to determine if additional public health actions are needed in work areas.

“Ultimately, the Air Force wants to ensure airmen and the Air Force community remain healthy and able to fly, fight and win in air, space, and cyberspace,” according to the release.

Individuals selected for testing will receive an email from their local treatment facility and anyone who has had a positive confirmed case of coronavirus within the last 90 days will not be tested.

A saliva-based coronavirus test from the company Curative, Inc., will be used for the study. The Air Force signed an agreement with the company in April to use an oral coronavirus test that received a Food and Drug Administration emergency-use authorization, according to the release.

Results will be put into aggregate samples and presented to commanders “to allow them to take public health actions in response to the presence of [coronavirus] in the work area, even if people seem healthy,” according to the release. If there is a positive result in the aggregated testing group, unit leadership will be notified, and they will notify individuals to seek additional medical evaluation that might include diagnostic testing.

After testing is “fine-tuned and streamlined,” it will expand to other materiel command bases and other base populations.

Headquartered at Wright-Patterson Air Force Base in Ohio, Air Force Materiel Command develops, delivers, supports and sustains weapons capabilities of the service, as well as oversees centers for base support, sustainment and testing and development. It employs nearly 80,000 service members and civilians.