Air Force Academy to return its 4,000 cadets to campus by end of July 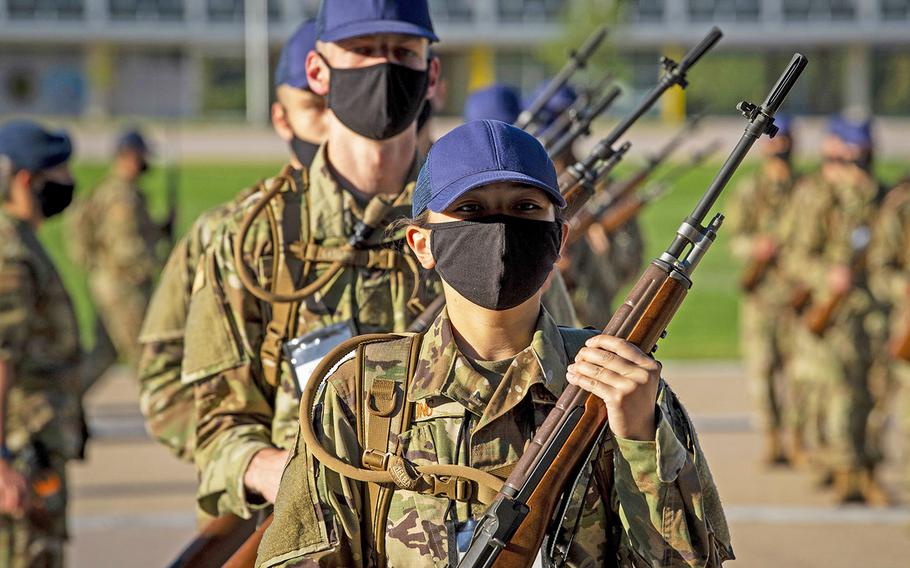 Maximizing social distancing precautions, this year's class of 2024 Basic Cadets were split into two groups of four squadrons for the March Out to Jack's Valley for Basic Cadet Training at the US Air Force Academy in Colorado Springs, Colo., on Monday, July 20, 2020. (Joshua Armstrong/U.S. Air Force)

Maximizing social distancing precautions, this year's class of 2024 Basic Cadets were split into two groups of four squadrons for the March Out to Jack's Valley for Basic Cadet Training at the US Air Force Academy in Colorado Springs, Colo., on Monday, July 20, 2020. (Joshua Armstrong/U.S. Air Force) 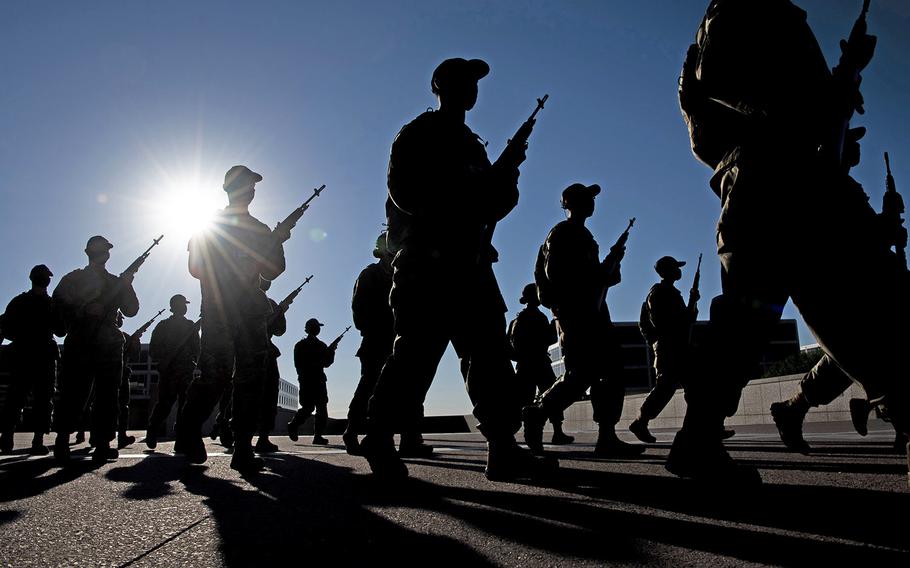 Class of 2024 Basic Cadets were split into two groups of four squadrons for the March Out to Jack's Valley for Basic Cadet Training at the US Air Force Academy in Colorado Springs, Colo., on Monday, July 20, 2020. (Joshua Armstrong/U.S. Air Force)

Some 3,000 sophomore, junior and senior cadets will join the 1,145 freshmen who arrived on campus June 25 to begin basic cadet training, academy officials said in a statement. It will mark the first time that returning cadets come to the campus after they were sent home in mid-March over concerns about the fast-spreading virus.

“The safety of cadets, staff and the entire [U.S. Air Force Academy] community, as well as the Colorado Springs community, remains our number one priority,” according to the statement, which boasted the recall of students would make the academy among the first American universities with its full student body on campus.

The Air Force Academy will take a variety of precautions aimed at ensuring safety and mitigating any potential spread of the coronavirus among its student body, including social distancing on campus, the use of online and in-person classes, and a testing program aimed at rooting out asymptomatic carriers of the virus. It will also house 400 of its cadets in off-campus hotels to ensure it has enough space to isolate and quarantine individuals who contract or are exposed to the coronavirus, officials said.

“The select group of healthy cadets living off-base will be subject to the same stringent military training and academic standards, and safety protocols as the cadets remaining on base,” according to the academy statement.

The decision to recall the cadets to school comes as universities and other schools wrestle with the prospects of returning students to classrooms amid the pandemic that is surging in some areas of the country, especially in several southeastern states, Texas, and California, according to Johns Hopkins University statistics. The United States reported more than 3.9 million cases of the virus and more than 143,000 deaths as of Thursday, according to the university.

Officials said the Air Force Academy worked with local, state and federal public health officials to formulate a plan to return students to the school safely. They said ensuring the cadets continued their studies and were on a course toward commissioning into the Air Force and Space Force was a national security priority, labeled “mission essential” by Defense Secretary Mark Esper.

Cadets returning to campus will be tested for the coronavirus four times in their first two weeks — when they first arrive and on their seventh, 10th and 14th day at the academy. They will then be randomly tested throughout the fall semester “to identify any potential asymptomatic cases in the earliest stages possible,” according to the academy.

Officials described the planning to return cadets to school as “a daunting challenge,” which relied heavily on the input of a Pandemic Math Team made up of academy experts in statistics, mathematical modeling, biology, virology, and public health. The team used real time data to model a coronavirus testing program to ensure cadets could safely return to the academy without triggering a major outbreak, according to the statement.

Within the freshman class already on campus, less than 2% tested positive for the virus, within the range predicted by the team, officials said. Those officials declined to provide specific numbers of positive cases, but they said there had been no large spread of the virus among its incoming students. Those freshmen cadets are conducting basic cadet training while following public health guidelines, including social distancing, wearing face coverings, and limiting their interactions to small groups of about 30 cadets.

The Air Force Academy on March 13 dismissed its freshmen, sophomore and junior cadets to return home and finish their spring semester coursework from their homes. School leaders chose to keep senior cadets slated to graduate on campus to complete their studies primarily via virtual classes.

On April 18, the academy graduated 967 officers into the military during an unprecedented graduation ceremony in which family and friends watched the commencement online and the cadets commissioned into the military while separated by at least 6 feet from one another.