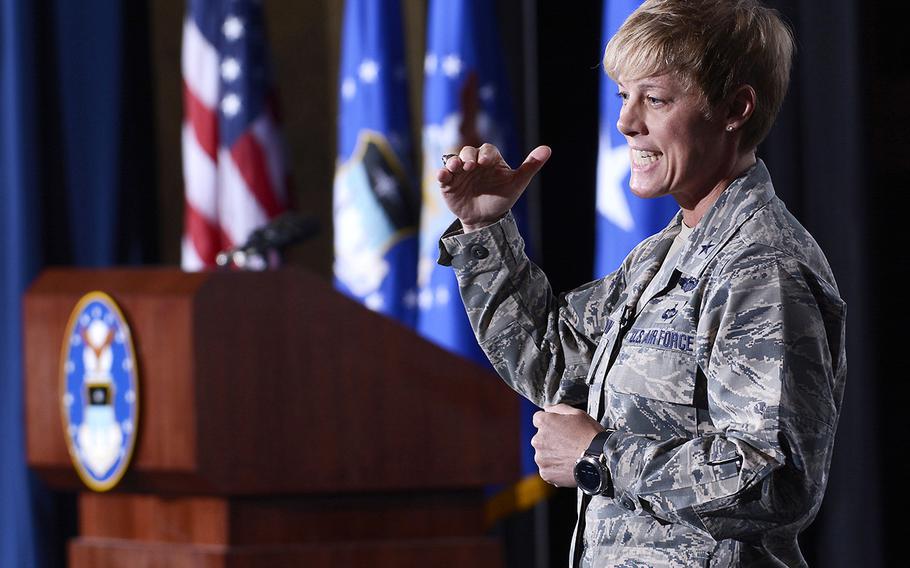 WASHINGTON – The general in charge of the U.S. Air Force Academy’s 4,000 cadets has been removed from her duties and is under investigation, officials at the Colorado institution said Monday.

“Effective immediately, Brig. Gen. Kristin Goodwin is no longer performing her duties as the commandant of cadets pending the results of an ongoing investigation,” Lt. Col. Tracy Bunko, a spokesman for the academy, wrote in an email. She declined to provide any additional details about the nature of the investigation or who was conducting it.

Bunko said Air Force Col. Scott Campbell had temporarily taken command of the academy’s Cadet Wing. Campbell most recently had been serving as commander of the 355th Fight Wing at Davis-Monthan Air Force Base in Arizona.

Bunko did not answer questions Monday including who relieved Goodwin of her duties or whether Goodwin would be temporarily assigned elsewhere while the investigation is conducted.

Goodwin’s firing comes just weeks before she was slated to leave her position in a regular rotation of leadership. The Air Force announced in December that Brig. Gen. Michele Edmondson was scheduled to replace Goodwin in the summer.

Goodwin was expected to transfer to the Pentagon and serve as the director of current operations for the Air Force deputy chief of staff, according to a service announcement last year.

The commandant of cadets is in charge of overseeing daily life for Air Force Academy cadets. The person is responsible for “character and leadership development, military training, supervising cadet life activities, and providing facility and logistical support to all cadets,” according to an Air Force description.

Goodwin’s selection for commandant of cadets, a position she took in May 2017, garnered media attention because she was the first openly gay Air Force general to serve in leadership at the academy.

Her selection was praised by LGBT advocates, but it also faced criticism from religious groups. That included one organization that filed a complaint with the Pentagon’s Inspector General’s Office, claiming Goodwin must have lied about her sexual orientation to enter the service, which at the time barred any gay individuals from serving. The “Don’t Ask, Don’t Tell” policy, which allowed gay individuals to serve if their sexual orientation was not made public, was enacted about one year after she entered the service.

Goodwin is a 1993 graduate of the Air Force Academy. She is a pilot by trade, who has recorded more than 2,900 hours flying aircraft including B-52 Stratofortress bombers and B-2 Spirit stealth bombers, according to her Air Force biography. She has commanded units including the 2nd Bomb Wing at Barksdale Air Force Base in Louisiana and the 509th Operational Support Squadron at Whiteman Air Force Base in Missouri.

According to the Air Force, she was part of the team that planned the first night of the U.S. “Shock and Awe” air campaign leading up to the 2003 invasion of Iraq. She later led planning of air operations for the initial phase of 2011’s Operation Odyssey Dawn, the American bombing campaign in Libya that would lead to Moammar Gadhafi’s ouster.

Goodwin’s tenure at the Air Force Academy has been praised and criticized, according to the Colorado Springs Gazette.

The newspaper reported some people had credited Goodwin with installing tough discipline policies. Others, however, criticized her for treating subordinates poorly, among other issues, the paper reported, citing unnamed sources.