Age is no obstacle: Soldiers complete Army’s toughest schools after 40 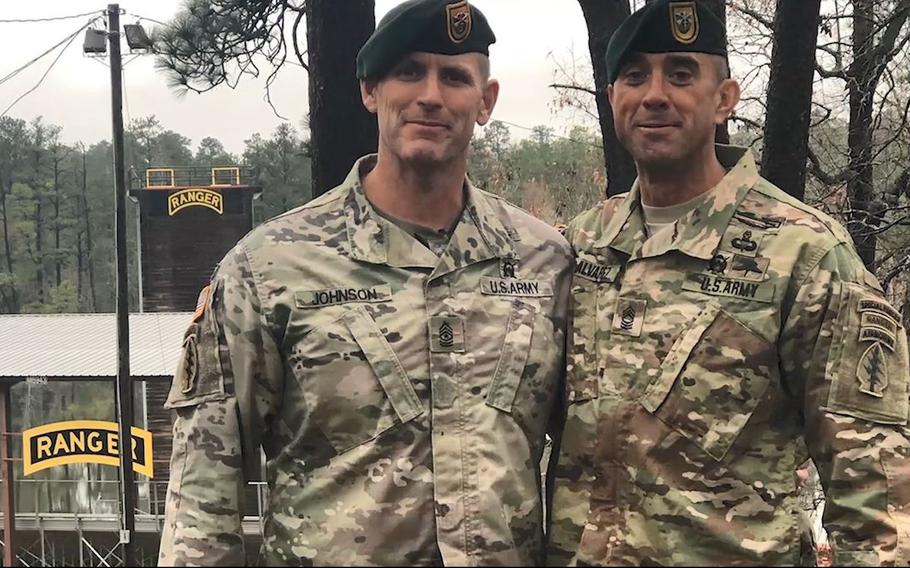 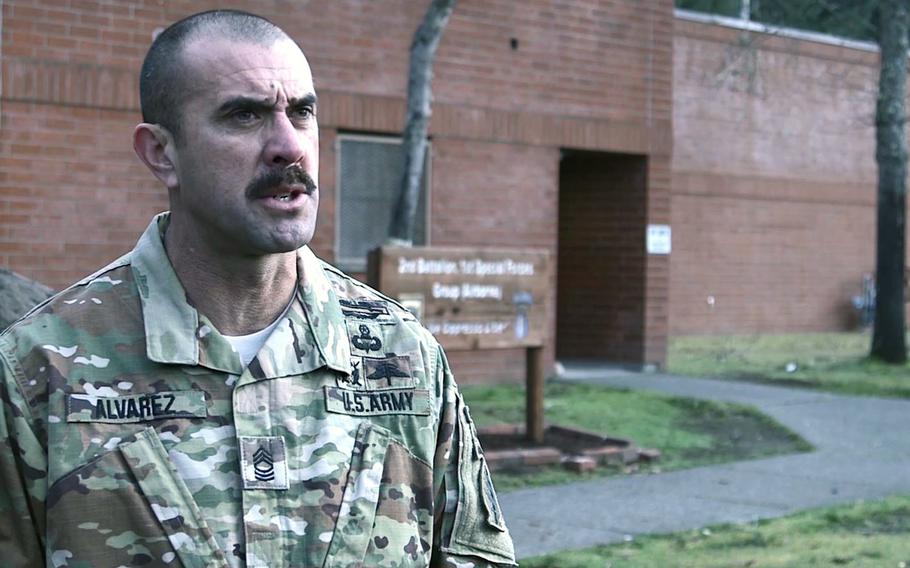 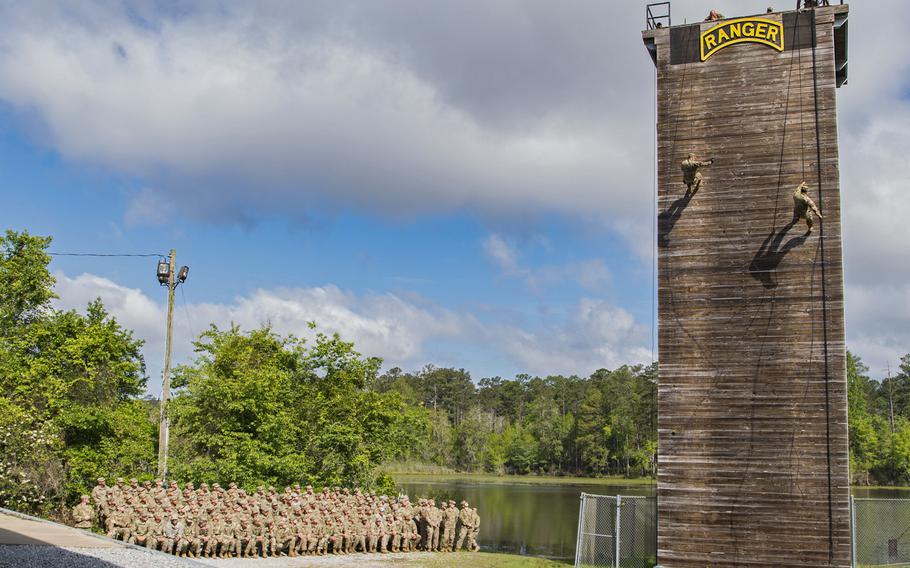 Soldiers from Ranger Class 05-18 look on as a rappelling demonstration takes place April 27, 2018, prior to the graduation ceremony for U.S. Army Ranger School at Fort Benning, Ga. () 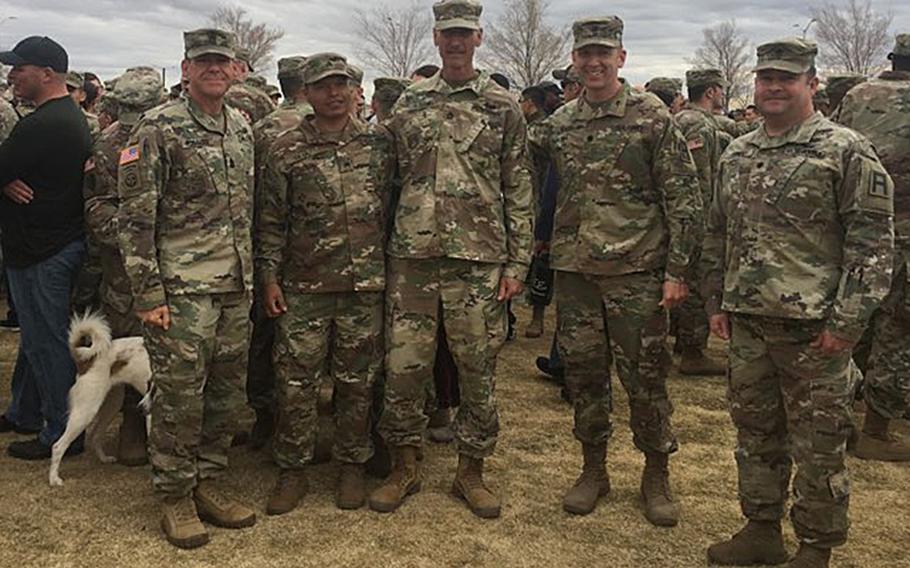 Sgt. 1st Class John Slocum, center, is pictured here after graduating from Air Assault School at Fort Bliss, Texas, at the age of 56 in December 2018. Slocum is believed to be the oldest graduate from the school. (Courtesy John Slocum)

A weapons expert with 1st Special Forces Group (Airborne), Master Sgt. Jole Alvarez had completed some of the most challenging courses the Army has to offer, but Ranger School eluded him for two decades.

He’d been slated to attend in 1999, but instead was sent to Combat Diver Qualification Course first. Then the 9/11 attacks kicked off years of high operations tempo that kept him posted overseas or deployed much of the time since. But, late last year, he got his chance.

“They called me ‘Old Man Jole’ or ‘The Old Man,’” Alvarez said of his peers and instructors in a recent interview. For him, it was a chance to “get amongst the younger guys and see where you sit.”

Alvarez earned his Ranger tab at Fort Benning, Ga., in December at 42, nearly two decades older than the average student, about half of whom typically fall out before completing the 62-day leadership and small unit tactics course. Alvarez is one of two soldiers to recently complete physically grueling courses at a time in their lives when many soldiers might be tempted to coast into retirement.

Also in December, Sgt. 1st Class John Slocum, 56, completed the Army’s Air Assault School — often billed as the toughest 10-day course in the Army — at Fort Bliss, Texas. Officials there believe he may be the course’s oldest graduate.

“It’s one of my better accomplishments,” Slocum said. “This one here is something I wanted.”

Students at the school learn skills for combat helicopter insertion, sling load rigging and rappelling, among others. Perhaps the only same-length Army course that’s tougher is the pre-trial for aspiring combat divers, known as the Maritime Assessment Course, said Alvarez, the Green Beret.

In April, Slocum will have served 22 years in the military, beginning as a Marine artillery observer in 1981. After a four-year hitch in the Corps and a year in the National Guard, the New York native left the service until 2003, when he joined the Army Reserves as a cannon crewmember, becoming a drill sergeant in 2004.

For the next decade and a half, he sought to attend Air Assault School, but it was tough to get a seat as a reservist, he said in a recent interview. His opportunity came when he got active duty orders to Fort Bliss, where he’s now serving as an observer controller/trainer on ranges there.

Four times he completed a pre-trial, as required by his brigade, but didn’t get a slot in the school. His fifth time was a charm.

Despite the preparation, which also included twice weekly ruck marches and lots of running on his own, it wasn’t easy, he said.

“They broke me off pretty good,” he said in an email. “I think if I did this at a younger age [it would have] been better, but it was something I had my mind set I wanted to do.”

Physically, he often need more recovery time than younger soldiers, but he felt he held his own, partly because a younger soldier had “put me through the wringer” to prepare. The classroom side of the course was what challenged him the most, since he wasn’t used to cramming for tests, he said.

Some troops in their late 40s and early 50s have completed the course, and Slocum said he’d heard of one other soldier over 55 who’d attempted it, though he quit on the 12-mile ruck march, the course’s final event.

“I get that far, I’m crawling,” Slocum said.

Alvarez is also among a rarified group of older Ranger School graduates, though not the oldest. That distinction is held by Rob Fortenberry, a command sergeant major with the Fort Drum, N.Y.-based 10th Mountain Division’s 2nd Brigade Combat Team, who graduated at age 45 in July 2016, according to an Army release.

Age has some advantages for students who train 20 hours a day with minimal food and sleep, said Col. Chris Colavita, who earned his tab a few months shy of his 40th birthday in 2009. Younger soldiers often need more sleep and may lack perspective on the course’s hardships.

“They can only hurt you so much,” Colavita said of the instructors.

About four hours was a good night’s sleep for him in his regular life at the time, he said. A more difficult adjustment was mental — he hadn’t had to lead a squad or platoon for about 15 years.

At 42, no one would have held it against him that he didn’t have a Ranger tab, Alvarez said, but completing the course was about living up to the Special Forces ethos. He’d have done the school even if it took five more years, he said.

“If you’re going to talk the talk, you better walk the walk,” he said. “I’m not going to rest on my laurels.”

Used to putting in “hard yards” in his daily regimen, he added a couple of road marches to prepare for Ranger School, he said. Years of experience as a combat diver helped keep him going whenever the course got particularly tough.

“I can breathe right now,” he’d say to himself, a reminder that he’d been through worse underwater.

The course did bring unique discomforts, too, such as bitter temperatures during mountain phase in Dahlonega, Ga., which the Joint Base Lewis-McChord, Wash.-based soldier said was probably the coldest he’s ever been.

“I’m still getting used to feeling my fingers and toes,” he said.

A 22-year Army veteran, Alvarez comes from a “lineage of duty to country” that includes grandfathers who served in the storied 101st Airborne and 1st Infantry divisions during World War II and three uncles who served in Vietnam. His younger brother, who fought in Afghanistan, served in the 75th Ranger Regiment and completed Ranger School before him.

Alvarez himself has deployed many times since 9/11, he said, and plans to continue serving as long as he can cut it.

“I’ve got a few more years,” he said. “As long as my body’s still holding up, I’m still of sound mind and I’m able to keep up with guys that are half my age, then I still want to give back to my country.”

Slocum is looking to become an Army master fitness trainer and hopes to attend Airborne School, though he’s not sure he’ll get the chance. The typical age cut off for jump school is 35, though older soldiers have earned their wings.

For Alvarez, the delay in going to Ranger School meant he missed out on a few things. He and his younger brother, Staff Sgt. James Perez, had discussed competing together in the Best Ranger competition, but they’ll never get the chance. Perez died in an August 2017 training accident in Texas at age 28.

“He was going to be the guy that pinned my Ranger tab on me,” Alvarez said.