After nearly 29 years, Navy reverses ‘other than honorable’ discharge for sailor sexually assaulted by 6 shipmates 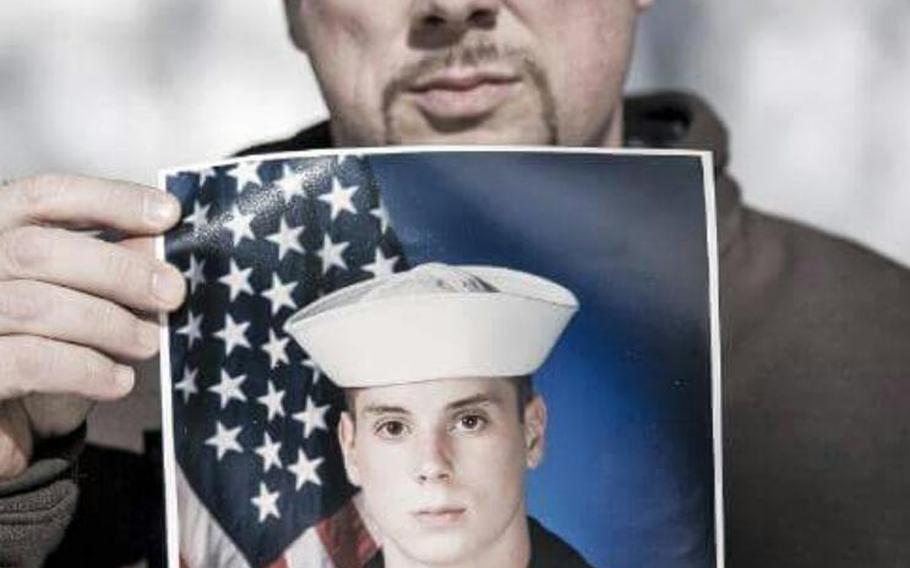 Heath Phillips displays a photo of himself at age 17, shortly after joining the Navy. (Courtesy of Heath Phillips)

WASHINGTON — His assailants were relentless.

Heath Phillips was 17 – a fresh young sailor on his first Navy ship. There, a gang of six sailors zeroed in on their prey, raping, beating and sodomizing him repeatedly. He tried reporting them, but for 45 days, his superiors shrugged off his complaints and sent him back for more.

Terrified, Phillips went absent without leave. He got caught and sent back and was molested again so he went AWOL again.

After five times, desperate to get out, he agreed to an “other than honorable” discharge from the Navy.

He’s been fighting to get that reversed ever since.

He told his story to anyone who would listen. Became the voice of male sexual trauma in the military. He helped advocate for other survivors and stood before Congress testifying to his own shame and trauma as he pressed for reform.

He appealed three times to the naval corrections board to change his status to honorable. Three times he was rejected.

But Phillips, too, was relentless.

This week, nearly 29 years after he was discharged, his doggedness paid off. In response to his fourth try, the Board for Correction of Naval Records agreed on Wednesday to overturn his record and grant him an honorable discharge.

“For 25-plus years I have been plagued with the stigma of having an other than honorable discharge because I was raped and retaliated against,” said Phillips, now 47, who struggled with anxiety, post-traumatic stress disorder, nightmares and alcoholism.

“I have 20 years of my life I won’t get back,” he said. “What pushes and drives me is that I don’t want anyone else to ever go through that.”

The board not only upgraded Phillips’ original discharge designation, it granted him more than he’d requested – giving him an RE-1J code, which means he was eligible to re-enlist but declined.

It was almost unheard of.

“Kind of like lightning striking twice,” said Col. Don Christensen, a former military judge and president of Protect our Defenders, which is fighting to end the scourge of rape in the military.

Christensen said that the deck was stacked against Phillips when he opted for discharge rather than court-martial all those years ago – even if it was just to get away from his assailants.

But the fact that the case was so old, and attempts to overturn it had been rejected, made the outcome all the more rare.

“That’s what makes his case in particular such an amazing success,” Christensen said, noting that to him, it showed that the perspective of military correction boards is changing.

“I think it’s a good sign they are moving in the right direction,” he said. “But the sad thing is the military isn’t getting the message and we are still seeing people getting the same treatment Heath got back in the ‘80s with a huge retaliation problem.”

According to the latest data released in January, 14,900 members of the military were sexually assaulted in 2016 – 8,600 women and 6,300 men. Many were assaulted repeatedly, nearly tripling the number of assaults. One in four women and one in three men were assaulted by someone in their chain of command.

Most cases still go unreported and of those who do report, 58 percent of women and 60 percent of men faced retaliation – mostly from within their chain of command. A third of those who report sexual assault leave the military within a year, Christensen said. And victims receive harsher discharges with 24 percent separated under less than honorable conditions – a rate far higher than the general military population.

After he was released from the Navy, Phillips, still not 18, was not doing well. He was anxious all the time. He couldn’t sleep and had nightmares.

He married a childhood friend, starting a long a rocky marriage in which he said he spent the first years angry, often drunk and “always miserable.” He woke up choking his wife in his sleep and they separated and got back together more times than he can count. They ultimately divorced.

He soon learned he was not eligible for medical help through the Department of Veterans Affairs due to his “other than honorable” discharge. He had trouble finding work. He drank more.

His wife came into the marriage with a son and they had four more children. But it was only in 2009 – 20 years after his discharge — that Phillips sought help. It was the morning after he tried to kill himself by driving into a tree, he said.

“It’s the road I still drive today — there are so many trees that are perfect,” he said. “I thank god I was too drunk to find one of them.”

The next morning, for the first time in 20 years, he cried. A lot.

He knew he wouldn’t survive. It was affecting him and affecting his children, he said. He blames himself that one of his sons has an addiction problem.

After that, Phillips started fighting to take his life back. In 2015, he won back his VA rights through the board of veterans appeals in Washington. He is now rated a 100 percent service-connected disability for post-traumatic stress disorder.

And he joined forces with other advocacy groups to reform the military’s treatment of rape and sexual assault cases and to protect those who report assault from retaliation.

He is one of a very few male victims of sexual assault who openly tells his story.

It was through his advocacy work that he connected with his attorney Coco Culhane, director of the Veteran Advocacy Project at the Urban Justice Center in New York City. Culhane said that advocates and law student interns at VAP spent years requesting documents from the government through the Freedom of Information Act, tracking down witnesses and combing through court martial transcripts to collect evidence for Phillips’ petition to the board. Culhane spent months on the brief in the final year, submitting a thick packet to the corrections board.

In its decision, the board wrote that it carefully reviewed the mitigating factors. Among them: the fact that Phillips was a victim of military sexual trauma, or MST, and that created “a mitigating mental health condition” that impacted his decision to sign the discharge papers all those years ago. That was something a prior board review had rejected.

It also referred to the fact that his petition “notes that he volunteers his efforts to raise awareness about MST, provides support to other MST survivors and is an advocate for legislative reforms.”

After all these years, his tenacity, coupled with his advocacy work, proved to be the winning combination, Christensen said.

“When you see someone like Heath come forward and be public and then ultimately have success, it’s going to inspire other men that they can come forward too,” he said.

For Phillips, the ruling doesn’t undo 20 lost years. But it is vindication. He hopes it will be a message to others.

“There is light at the end of that very, very long tunnel and it’s not out of reach,” he said. “I never in a million years thought I would get that upgrade.”