‘A sense of pride’: Army mascots, a donkey and goat, promoted at Fort Sill 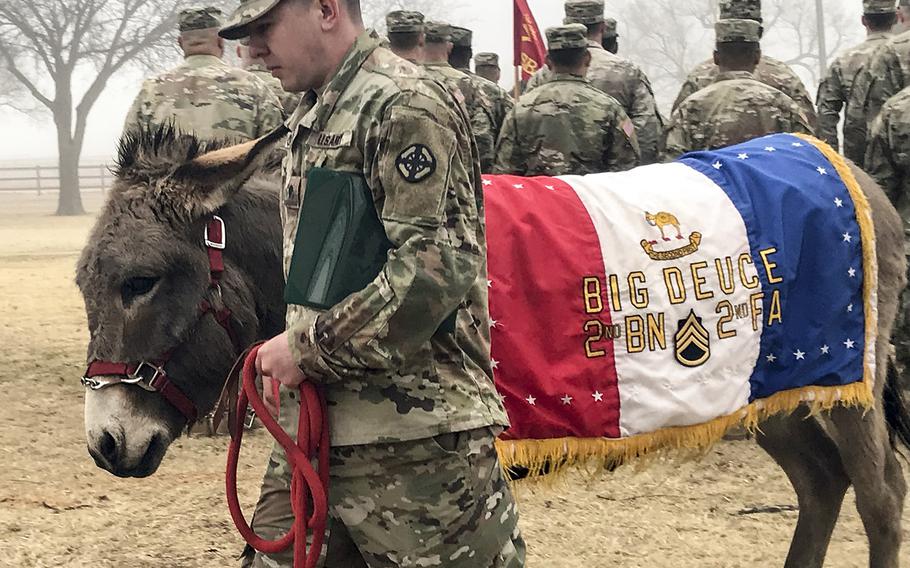 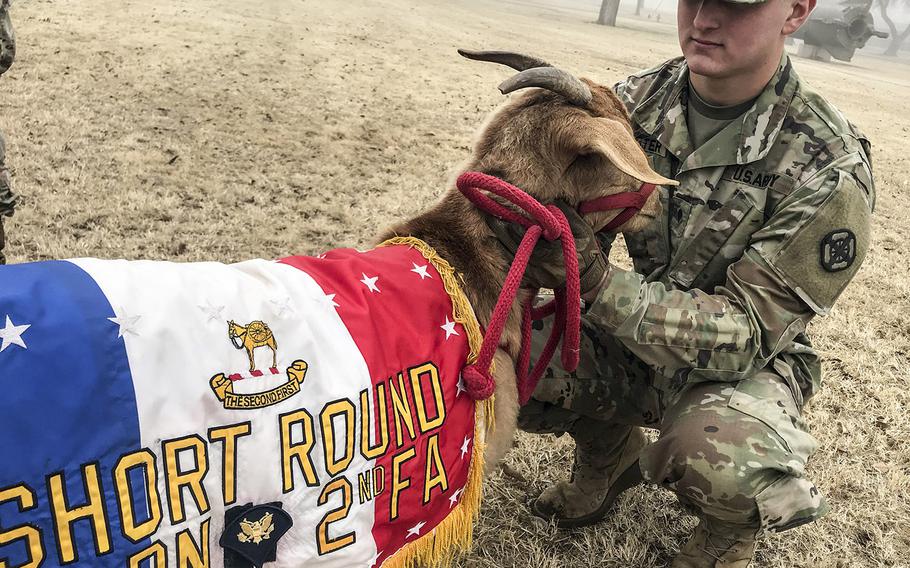 So nearly 200 soldiers and family members of the battalion gathered Tuesday morning at the post to watch the two unique unit members receive promotions to staff sergeant and specialist.

While rising to those ranks doesn’t typically garner such fanfare, when a donkey and a goat are the ones being promoted, it’s cause for celebration.

So mascots Staff Sgt. Big Deuce VII and Spc. Short Round VI, a donkey and goat, respectively, stood before the unit and soaked in the praise that comes from exhibiting good behavior — in their case, not biting or kicking anyone.

Such a celebration is warranted because the mascots mean a lot to the unit, said Lt. Col. Lazander Tomlinson, battalion commander.

“We’ve got the battalion colors and every battery has their battalion guidon, but the center of the organization are the requirements and the sense of pride that the donkey and the goat bring,” he said.

A mule has long been the mascot of the U.S. Army because of its usefulness in military operations. Second Battalion’s unit insignia features a mule soldier to commemorate the unit’s history as a pack artillery unit. The unit’s nickname is “Big Deuce,” and so the donkey received that name as well.

“Over the course of time, the battalion has grown into that mule soldier idea, that esprit de corps,” Tomlinson said. “If you have a mission to accomplish, just put it in our pack and a 2-2 soldier will help take care of it.”

The first Big Deuce donkey arrived at the battalion in the 1950s, when the commander asked battalion Command Sgt. Maj. John Sanders to bring him a donkey, said Mike Sanders, son of the now-deceased sergeant major.

“He got ahold of my grandpa in west Texas and he found somebody in New Mexico that had a donkey,” Sanders said. “The whole trip to get it and buy it cost $42.”

Sanders and his spouse, Tonya Sanders, live in the Lawton, Okla., area and work as contractors at Fort Sill. Both enjoy driving past the animals’ stables each day as they travel to work.

“When dad passed away (in 2013), I called headquarters and asked if they could do the funeral,” Sanders said. “My dad said the best time he had in the Army was with Big Deuce.”

Big Deuce VI attended his father’s funeral and when the stables were rebuilt shortly after John Sanders’ death, the unit named the facility after him. The couple said they are always happy to attend a promotion ceremony for the donkey and the goat.

The current Big Deuce is the seventh donkey to serve as the unit’s mascot and it was promoted Tuesday because of good behavior, said Spc. Stephen Gran, the donkey’s handler. He volunteered for the job because of his experience working family farms in Iowa and South Dakota.

“He hasn’t had any incidents of kicking or biting any of the sergeants major or colonels, or anything like that,” Gran said. “When we first got him, he was difficult to control because he had never been on a lead rope. We had to train him up to being on a lead rope and everything like that. He’s a lot better than when I first got here.”

Now 5 years old, Big Deuce mostly has adjusted to the mascot life. However, Gran said, there are occasions when the donkey decides he is tired of walking.

“He’ll just stand there, and you can’t do anything all,” he said. “He’s done that a couple times in a retirement ceremony. I try to force him to walk. Sometimes it works, sometimes it doesn’t,” Gran said.

Big Deuce’s partner in his official duties is a goat known as Short Round. This is the sixth goat to take on the role and the first female, said Spc. Austin Hester, Short Round’s handler.

“When I first got to the unit, I saw that the animals were in ceremonies and thought that was prideful and I wanted to be a part of that,” Hester said, adding he had no prior livestock experience before taking the job.

Short Round took the promotion fast track, earning the rank of specialist less than a year after joining the unit.

“She’s had good behavior in ceremonies and was always well-kept and neat with herself,” Hester said.

The goat does have a tendency to rear up and kick the backs of her handler’s legs, but he sees it as more horseplay than bad behavior. Otherwise, Hester said, Short Round has overcome her initial shyness as a mascot and has taken well to her duties.

Last fall, the duo traveled to the University of Oklahoma in Norman to participate in the festivities around a football game with the U.S. Military Academy team from West Point, N.Y., Tomlinson said. The donkey and the goat led the OU parade of champions into the stadium.

“They’ve really become the Army mascots of this greater Oklahoma area,” he said.

While the two animals are the only battalion-level live mascots authorized in the Army, the 1st Theater Sustainment Command at Fort Knox, Ky., and West Point also have mascots.

Cpl. John “Huck” Blackjack, a 14-year-old pony mule, was donated to the sustainment command in 2015. West Point has three mules, a tradition that dates to 1899. The current animals are named Stryker, Ranger III and Paladin.

It does take extra work to maintain the two animals, but Tomlinson said it is worth it to have a living symbol of pride for the battalion at Fort Sill.

“They are a sergeant and a specialist in our formation,” he said. “It is worth the cost.”