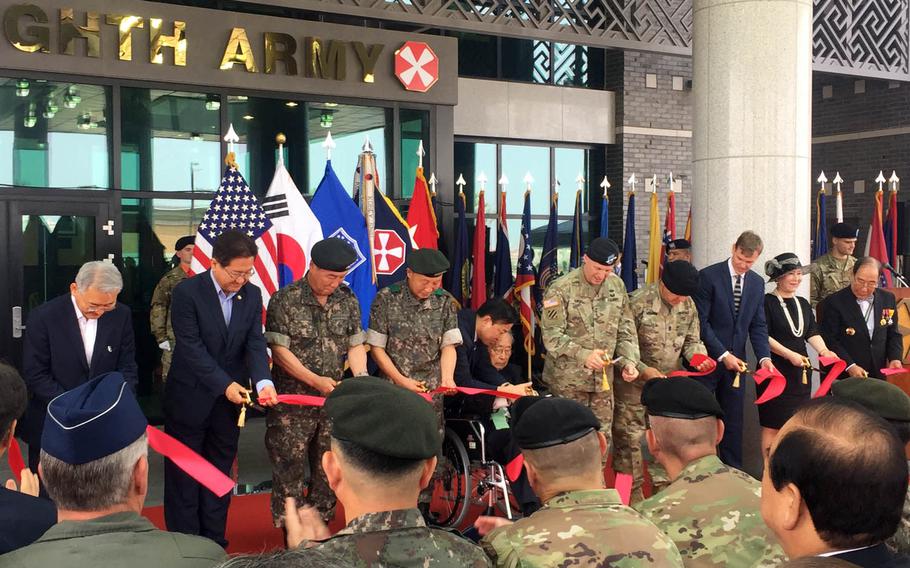 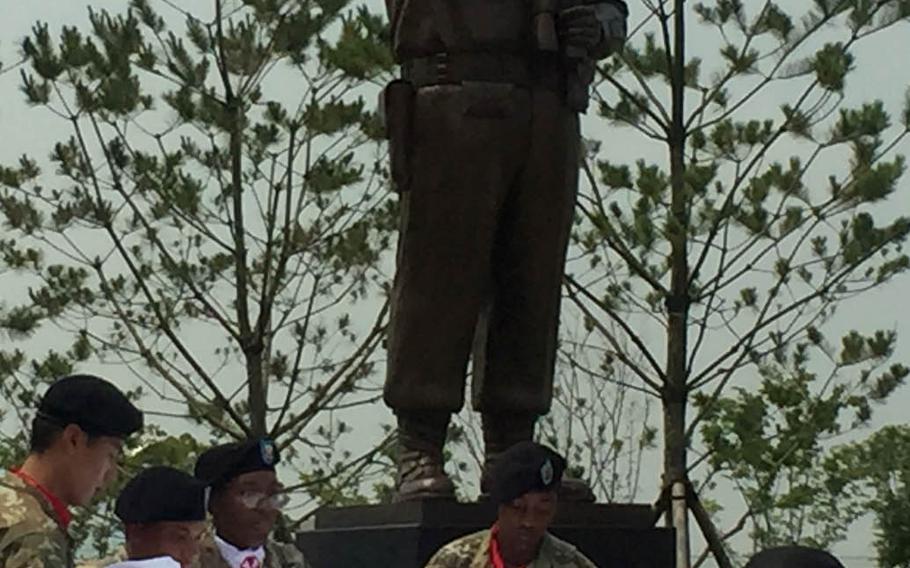 Buy Photo
The 8th Army unveils the new home of the statue of Korean War hero Gen. Walton Walker during a ceremony to mark the opening of its new headquarters at Camp Humphreys, South Korea, Tuesday, July 11, 2017. (Kim Gamel/Stars and Stripes)

CAMP HUMPHREYS, South Korea – The 8th Army marked the inauguration of its new headquarters on Tuesday, a milestone in more than a decade of efforts to relocate the bulk of U.S. Forces Korea south of Seoul.

Lt. Gen. Thomas Vandal, 8th Army commander, said the move to the shiny, new building – complete with a skylight, conference room and Smoothie King - was only the beginning as construction is still underway to make room for more units and civilians at Camp Humphreys.

“After over a decade of planning, negotiating, building and moving, 8th Army is excited to be part of the largest transformation and re-stationing project in Department of Defense history,” he said before cutting the ribbon with other dignitaries.

The celebration included the symbolic unveiling of the bronze statue of Lt. Gen. Walton Walker at its new home. The statue, which shows the Korean War hero pointing north, long stood outside the 8th Army’s Japanese colonial-era main office at Yongsan Garrison in Seoul.

The $10.7 billion expansion at Humphreys — which will eventually replace Yongsan as the main U.S. military base in South Korea — has been frequently postponed since Washington and Seoul agreed in 2004 to move U.S. forces south of the Han River, which runs through the capital.

It initially was set to take place in 2008, but was pushed back to 2012, then 2016, 2017 and now - Vandal said - 2020 due in large part to construction problems and quality control issues. South Korea provided most of the funding and labor for the massive project.

Vandal dismissed concerns that the historic shift could leave the tense border area vulnerable after decades in which tens of thousands of U.S. servicemembers have served as a “tripwire” against North Korean aggression.

Several units, including some rotational brigades from the front lines near North Korea, have already redeployed. The 8th Army also had an advance team working in a temporary building.

Vandal said Camp Humphreys has tripled in size and will be the largest continuous and most populated overseas installation, with 42 miles of new communication lines and hundreds of new facilities, including vehicle-maintenance facilities, troop barracks, family housing and shopping areas.

Some 80 percent of the construction is complete and the rest is expected to be finished in the next 12 to 18 months, Vandal said, adding that will trigger the moves of the remaining units.

“Once complete in 2020, the transformation will reflect the enduring commitment of both the [South Korean] and U.S. governments to this great alliance,” he said.

But projects including a larger commissary and a new hospital continue to be plagued by delays, and officials privately say they assume the deadlines for many moves will be “pushed to the right,” lingo for delayed.

Not all U.S. military forces are moving. The USFK commander is expected to maintain a presence at Yongsan in his role as the head of Combined Forces Command, and the 210th Field Artillery Brigade will remain near the border until South Korea develops similar capabilities.

A joint U.S.-South Korean unit will continue to provide security for the Joint Security Area, as the truce village in the Demilitarized Zone that divides the peninsula is known. Troops also will regularly make the commute to training ranges that will remain near the front lines.

The 121 Brian Allgood hospital, which is staffed by about 1,200 soldiers and civilians, also will remain at Yongsan until the new one is completed and certified, the commander said.

“There will be a small footprint that will remain,” Vandal said, although he stressed details were still being hammered out in discussions between the two allies. “Those discussions are ongoing and we would anticipate some resolution on that in the very near future.”

Vandal repeatedly referred to the new facilities as “state of the art” and said the modernization would boost readiness by improving communication systems as well as living conditions for soldiers and their families.

He said it also will improve force protection by consolidating units, noting that as recently as 2003 the U.S. military had 173 camps and installations nationwide.

“We no longer have to defend potentially 173 camps and installations,” he said. “So it has allowed us to have better force protection, not only to ballistic missiles but also to the internal threat should there be North Korean special operations forces.”

The United States maintains about 28,500 servicemembers in South Korea, which remains technically at war with the North after the Korean War ended in an armistice instead of a peace treaty.