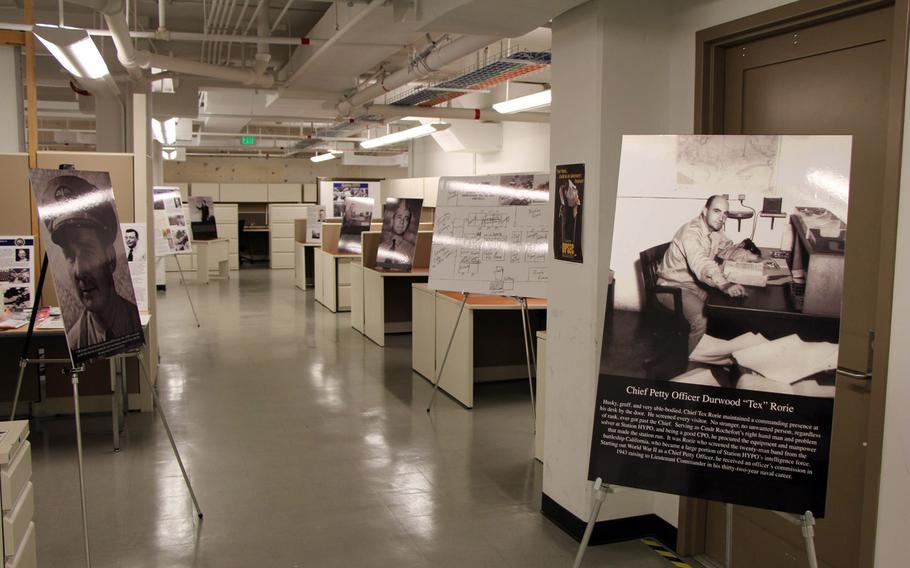 The space that formerly housed Station Hypo is today primarily used as a classroom. But the code-breakers and analysts who worked in the station during World War II were instrumental in the pivotal U.S. victory in the Battle of Midway, fought June 4-7, 1942. (Wyatt Olson/Stars and Stripes)

The space that formerly housed Station Hypo is today primarily used as a classroom. But the code-breakers and analysts who worked in the station during World War II were instrumental in the pivotal U.S. victory in the Battle of Midway, fought June 4-7, 1942. (Wyatt Olson/Stars and Stripes) 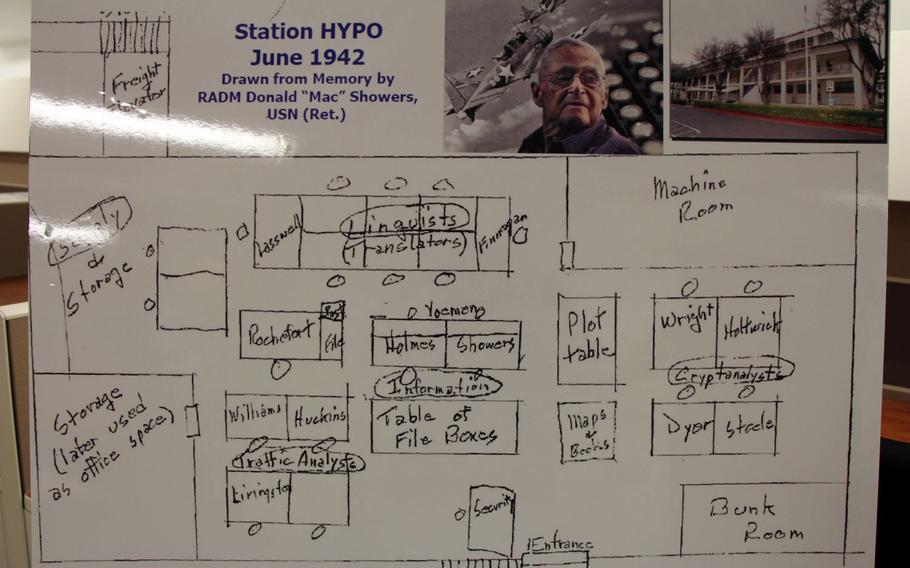 This diagram of the office layout of Station Hypo was drawn from memory by Rear Adm. Donald Showers, who served as a member of the code-breaking team during World War II. Showers died in 2012. (Wyatt Olson/Stars and Stripes) 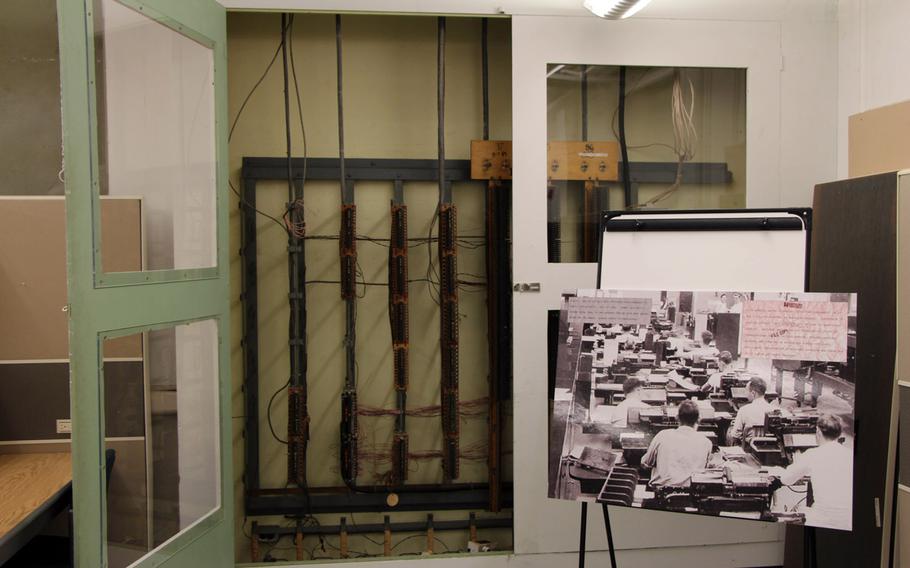 One of the few remaining relics from the code-breaking days of Station Hypo during World War II is this switchboard, through which Japanese messages were distributed daily to the analysts working in the Building I basement, dubbed the "dungeon" by the secretive team. (Wyatt Olson/Stars and Stripes) 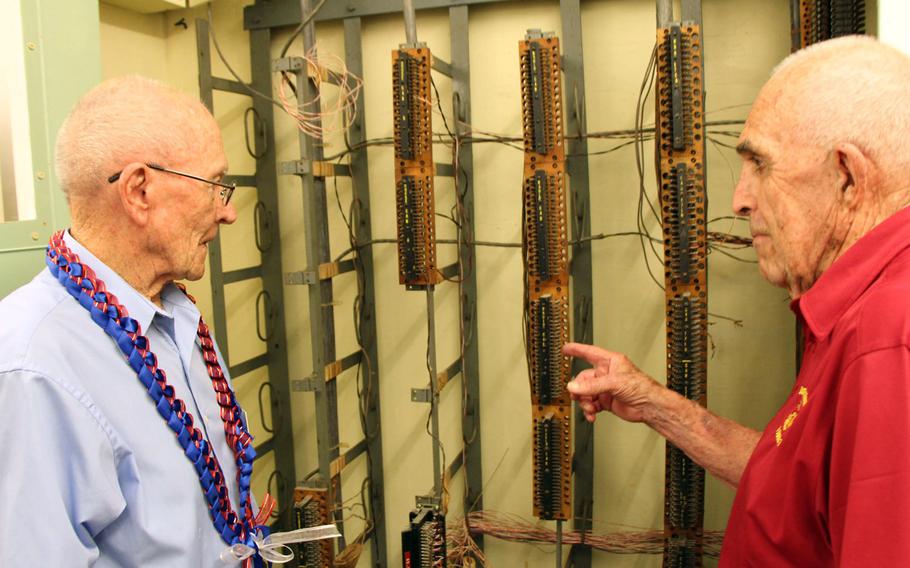 John F. Miniclier, left, and Edgar R. Fox, U.S. Marines who served at the Battle of Midway, examine a message routing switchboard during a tour June 2, 2017, of the former Station Hypo in Building I of the Pearl Harbor Naval Shipyard and Intermediate Maintenance Facility, Hawaii. The board is one of the few remaining relics of the basement that served as the secretive workplace of the band of cryptologists who broke the Japanese code in March 1942, which gave the U.S. a huge advantage. (Wyatt Olson/Stars and Stripes) 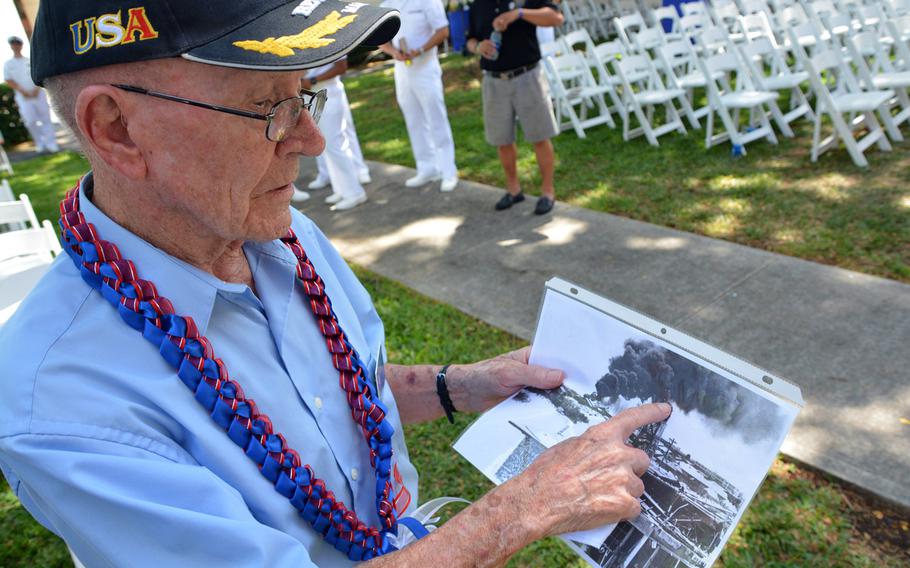 John F. Miniclier, who was a Marine private first class stationed on Sand Island during the Battle of Midway, points to the surveillance tower he was in during the Japanese attack on June 4, 1942. Miniclier was one of two veterans of the battle who attended the 75th anniversary ceremony held at Joint Base Pearl Harbor-Hickam June 2, 2017. (Wyatt Olson/Stars and Stripes)

JOINT BASE PEARL HARBOR-HICKAM, Hawaii — On June 4, 1942, Marine Corps Pfc. John F. Miniclier knew the Battle of Midway had begun as Japanese fighters strafed his encampment on Sand Island, one of the islands of the Midway atoll.

He and his fellow Marines had been told a few weeks earlier by Pacific Fleet command to expect an attack by a powerful Japanese armada.

What he didn’t know then – and like most Americans did not learn until decades after – was the key role a small group of code-breakers had played in the American victory over that Japanese naval force intent on seizing the Midway Atoll, which lies about 1,000 miles northwest of Honolulu.

The 95-year-old has a different understanding now.

“The code-breakers, I think, are the guys who saved my life,” Miniclier said after a ceremony Friday at Pearl Harbor commemorating the 75th anniversary of the pivotal naval battle. It was held on the lawn outside the historic Building I, which housed the code-breakers in the early part of World War II.

The intelligence they produced was key in stymying Japan’s takeover of Midway Atoll, an overwhelming invasion that would likely have spelled doom for the Marines defending it.

The Battle of Midway, which came just a half year after the Japanese surprise attack on Pearl Harbor, is widely regarded as the turning point of the war in the Pacific.

In its attempt to seize Midway, the Japanese fleet was caught by surprise by the U.S. Navy and lost almost 300 planes, a cruiser and four aircraft carriers, which had been among the six carriers used in the attack on Pearl Harbor. About 2,500 Japanese died.

The U.S. had significantly smaller losses: the carrier Yorktown, a destroyer, 145 planes and 300 men.

The 75th commemoration paid particular homage to the code-breakers, whose role in the Battle of Midway was “the most successful intelligence operation in history,” Samuel J. Cox, director of the Naval History and Heritage Command, told the audience.

A small coterie of intelligence analysts, linguists and code-breakers had been assembled in the summer of 1941 and began working in the windowless basement of Building I, which they dubbed the “dungeon.” It operated around-the-clock, and a Marine was posted at all times at the single entry. An 8-inch vault-like steel door, which hangs there still, was used to seal the room off.

Under the code name Station Hypo, the unit began intercepting and analyzing Japanese communications, with the anticipation that the U.S. and Japan would eventually be at war. By the eve of the December 1941 attack on Pearl Harbor, however, the unit had been unable to break Japan’s secret code, known as JN-25.

The intelligence failure demoralized them, Cox said, but by March 1942 they had cracked the code. In a short time the analysts learned that the Japanese were planning a massive invasion in early June of a location referred to only as “AF.”

Pacific Navy officials believed an attack would come either in the Aleutian or Midway islands; Washington officials thought the attack might be on the U.S. mainland. Station Hypo concocted a scheme to find out which.

The U.S. sent an uncoded, false radio message saying that Midway’s fresh water system had failed, which the Japanese intercepted. Station Hypo soon decoded a Japanese message that “AF” was having water problems.

There was no question then that Midway was the target.

A battle plan was assembled by Pacific Fleet commander Adm. Chester Nimitz and Adm. Raymond Spruance, who would lead the Navy’s forces in the critical battle.

“Today, we honor those who broke more than codes, but broke through barriers here at Hypo to enable victory,” Adm. Scott Swift, commander of U.S. Pacific Fleet, said at the ceremony.

“And we remember the brave sailors, Marines, and airmen that fought so valiantly 75 years ago, ever grateful for their service and sacrifice.”